Ada is a proud student who enrolled at Thors Military Academy alongside Crown Prince Cedric Reise Arnor. She is a serious hardworking person and reached second place behind Cedric in the combined periodic examination of the main and branch campus.[1]

Ada is introduced as a high-achieving student that is part of Cedric's entourage. She is one of the two he primarily moves around with, and joins him by piloting a crimson Spiegel when the prince decides to challenge the Branch Campus. Ada is seen once more in the capital as part of the joint field exercises and the operation to find Calvardian agents. She initially looked on New Class VII with hostility, but once she became more familiar with the group she considered them her rivals. They train together after a meeting in the Vander Training School.

Despite this, Ada is amongst the forces deployed to defend the Gral of Erebos alongside the Main Campus. They prioritise engaging the Branch Campus students when they arrive to help.

Following the events of the Great Twilight, Ada lost sight of her reasons to fight. She is present with the prince when he decides to ambush Class VII and Musse's reunion, but isn't seen again until after the battle against united Class VII at the Thors Branch Campus, where she went separate ways from Cedric.

When the main and branch campus form a joint battlefront during the Twilight's finale, the students were tasked with gathering materials for medicines. Ada was teamed up with branch campus student Sidney. Their search for a Bear Claw was interrupted when a large flock of monsters surrounded them. With the unexpected help from Class VII, Ada succeeded in routing the monsters.

Ada initially disdained Sidney, seeing him as nothing but a frivolous guy. Her opinion of him changed during the joint battlefront, when he did his best to protect her and when his knowledge helped them locate the Bear Claw. She questions him on whether he thinks she is weak for being a girl, but after his reply that she is the one worth saving, she judges him as some kind of 'crazy feminist' and states how she is impressed. Sidney confirms that she and Fritz are not together.

Later She and Sidney end up together on the Mishelam Wonderland Ferris wheel and after some awkwardness, talk and smile.

Following the re-organisation of the Thors campus, she is now the council president for the upcoming year. She is slightly disappointed that the main campus is not having an academy festival this year, but travels to the branch campus one where she faces Sidney in a chess club match, winning but stating it was close. She agrees to meet up with Sidney for another match afterwards. She is looking forward to more joint activities between the campuses in in the future.

Ada takes part in the final battle against Elysium at Reverse Babel, piloting her soldat. She is almost killed by a barrage of ordinance from Babel but the timely intervention of the Gralsritter and Thomas Lysander saves her life by creating a barrier. 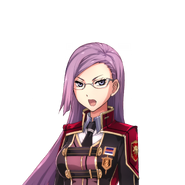