Kiseki Wiki
Register
Don't have an account?
Sign In
Advertisement
in: Characters, Bracers, Zero no Kiseki Characters,
and 3 more

Aeolia is a young woman with long platinum-lilac hair and red eyes. She wears a long green and teal coat and dress hybrid with a white buttoned shirt underneath and a red cloth tie, and a matching green feathered beret. She wears loose brown shorts and black tights, together with fleece lined boots. She uses thin silver throwing knives in combat.

Aeolia is a lover of all things cute, and the bread from Morges bakery, which she eats daily. She often asks if she can hug cute people enthusiastically and talks about their features dreamily. She prefers to resolve conflicts peacefully without sorting to violence, not liking people getting hurt if avoidable.

Aeolia was born in Remiferia, where she acquired her medical license. In battles, she is in particular skilled in reviving party members or inflicting status ailments on enemies.

Aeolia is introduced as one of several bracers working in Crossbell. She is often found paired up with Lynn on missions. Aeolia can be found in the bakery, as a fine lover of their bread, and she often comments on Tio Plato's cuteness, wanting to shower her with hugs and kisses. Throughout the story, the bracers are investigating Revache, providing security for the parade and completing other odd jobs. She is puzzled as to how Revache source their weaponry.

Aeolia wonders how her home state of Remiferia will fare with Crossbell's declaration of independence. She worries about those who are wounded, as there is a limit to how many can be treated in the city without being taken to a hospital.

When Lynn and Aeolia go missing during one of their missions, the SSS sets out to find them, using the Orbal net, Tio Plato's Aeon system and the Orchis Tower to ping their location. They had been waylaid in the swamps by the Stahlritter, who completely outmatched them.

Aeolia takes part in liberating the city from the remnants of Rufus' personal guard. She also takes part in bracer missions in Mainz, Armorica Village and a monster extermination request near St. Ursula Medical College. During a catchup with the SSS, she cannot resist commenting on the cuteness of some of their companions like KeA Bannings or Shizuku MacLaine.

Aeolia helps in the resistance efforts by engaging Zauber Soldat units on the Mainz road, allowing Lloyd's group to proceed to the Moon Temple. She treats the wounded with her med kit. She later helps in the retaking of the city, after having fought some monsters with Lynn. She states its a dream to be fighting with Fie, as it allowed her to replenish her 'cute energy'. Lynn tells her to control herself.

Aeolia and the rest of the Crossbell bracers arrive on a bobcat to the final battle at Reverse Babel, where they take part in the battle against Elysium. 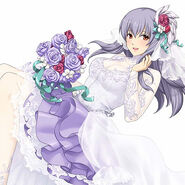 HR card in Yume no Kiseki