Agate is a no-nonsense man. He is direct with little sense of humor. He very much plays the "jerk with a heart of gold" stereotype, with his crass and aggressive attitude played against his being a bracer. He does not mince words with anyone but is at his core a caring and selfless person, a trait he conceals for his "tough guy" exterior but cannot stop from showing, especially when around Tita Russell.

It is noted, however, that Agate did not become a B-rank bracer on martial prowess alone. Despite his hot-headed personality, Agate is more than capable of calmly analyzing dangerous situations and constructing a suitable plan for executing the mission at hand.

Agate appears as a muscular young man with teal colored eyes and crimson red hair. He has spiky hair and long sideburns. He wears knee high boots and dark grey pants with a tank top and a waist high vest. Agate wears a bandana which he rarely takes off, and a stone hangs on his chest from a certain someone. In Trails of Cold Steel III, Agate cuts his hair and his eyes are now violet. He wears a black long sleeved shirt with a green vest over it as well as dark long pants and brown shoes. Agate parts with his bandana, but the stone still remains at his chest.

Agate Crosner is a tough guy who can be kind, caring and selfless at times. He can be described as a "Jerk with a heart of gold." Despite being kind, he can sometimes be crass and too direct. Agate takes his duty as a Bracer seriously, but he can be rough around the edges and has a hard time with people due to his directness.

Despite being hot-headed, Agate can look at his missions with a calm and analytical mind. That said, his brashness can sometimes put him in life-threatening danger.

Following Mischa's death, Agate was filled with rage and blamed it on both himself and the army for not doing enough, channeling his rage into his swordsmanship. However, his anger stunted his growth, which both Loewe and Ragnard took note of. Additionally, due to the trauma that he had suffered during the Hundred Days War, Agate became more independent preferred not to work with people (particularly children who remind him of his sister) lest they get hurt. After spending time with Estelle, Joshua and Tita, he was able to accept his sister's death and showed a much more softer side.

He shares a strong bond with Tita due to the time spent together during their journey, although he still treats her like a little sister from time to time due to their age difference, but it is hinted that he genuinely has feelings for her. Tita's family has accepted him as an impromptu family member, but he often bumps heads with Tita's mother Erika as she views him with suspicion for "corrupting" her daughter.

Agate was born in Ravennue Village in S.1178. There Agate lived happily with his family and his younger sister, Mischa until the Hundred Days War struck in S.1192.

Hello there, beautiful. May I have a moment of your time?
Please be aware spoilers for Trails in the Sky SC may be present in the following section. Hit [Show] on the right if the show must go on. Adios, amigos!

In S.1192, during a particular attack where the Erebonian Army were launching incendiary shells on a Liberl Army defensive line positioned near the village, Agate's village became besotted by incendiary shells causing many of the buildings to be burnt down and causing many deaths. During this attack, Agate was evacuating to the mountains with Mischa, when Mischa forgot a handmade birthday present that she was making for Agate and ran back for it.

Following Mischa, Agate ran back just in time to see the house that he grew up in get struck head on by an incendiary shell which burned his house to the ground with his sister with it. His sister died immediately. After his sister's body was recovered after the attack, Agate saw that she was still clutching the present despite suffering serious burns and from hence on blamed himself for her death.

Some time after the attack on his village, Agate ran one night to Mayor Maybelle's house and confronted her father for abandoning the village. Agate ended up slapped by an unknowing Maybelle for insulting her father, but he still continued on with his angry rant. When Maybelle's father mentioned sending financial support to Ravennue Village, Agate became infuriated and went to punch him, but he eventually relented and left the house without punching the mayor or getting an answer.

After the Hundred Days War was over, Agate met General Morgan while he was acting as the representative of the army during a mass funeral ceremony in his village for the victims of the war. However, at this point, Agate was so completely lost in his grief and anger that he didn't notice him.

After further tormenting and blaming himself for a period of time, Agate wanting some way to repent for his role in Mischa's death left Ravennue Village, taking his sister's present with him. He then traveled for a bit and ended up in Ruan, where he created and became the leader of the Ravens, a local port gang.

During one of his little criminal misadventures though, Agate met Cassius Bright who stopped him and recommended that he'd do a lot more good in joining the Bracer Guild. Agate eventually quit the Ravens and joined the Bracer Guild.
There we go, the end of spoilers. Thank you for your time!

Agate is temporary party member in Chapters 2 and 3 and can be a recruitable character for the final dungeon.

Agate Crosner is first introduced when Estelle Bright, Joshua Bright and Scherazard Harvey bump into him on the way to Ravennue Village. After sharing some chatter with Scherazard, Scherzard asks him if he is investigating the stolen airship. Agate states that he isn't and that he's only doing some minor errands.

When he hears from Schera that Cassius might've been on board, Agate scoffs at the idea that Cassius could've been caught so easily. He then notices Estelle and Joshua behind Scherazard and asks who they are. Scherazard introduces them as Cassius' kids. Staring at them for a bit, Agate questions whether Estelle is really Cassisus' daughter which upsets Estelle and causes Joshua to assure him that she is the real deal.

Agate just flicks it off. He then asks Schera in a moment of quick remembrance about whether they were the ones who took care of the creature on the mine trail. Schera says that they did and Agate doubts that the trainees did any real good against it. He then cheerfully says goodbye to the group and leaves, much to Estelle's annoyance.

After Cassius went missing, Agate was contacted by Cassius via letter to hunt down the men in black (Jester) who were causing mayhem in Liberl. During his travels, Agate met Estelle and Joshua Bright as well as Tita Russell and helped them stop Alan Richard's revolt.

Agate is a recruitable character again. He can also be Estelle's partner during the first chapter of the game.

After the Orbal Shutdown Phenomenon in Liberl, Agate was promoted to A rank.

Agate was one of the sixteen individuals summoned to Phantasma. He had been commissioned by the Russells to help out with the Orbal Gear Project, and was about to have dinner with the family when he was sucked in.

Independently Agate seeks the truth behind the Hamel Tragedy that spawned the Hundred Days War in S.1192, during which he lost his sister. 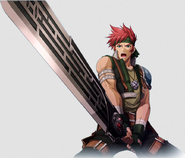 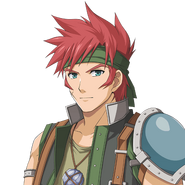 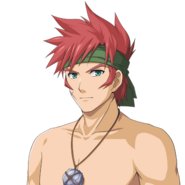 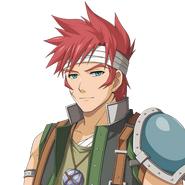 Memories - Agate and Mischa
Add a photo to this gallery 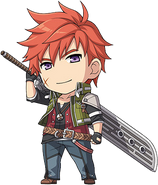 A promotional shot of Agate with Rean and Tita.

A promotional shot of Agate.

A promotional shot of Agate with Tita. 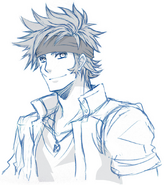 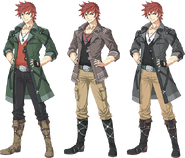 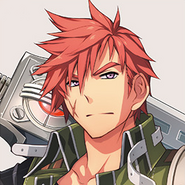 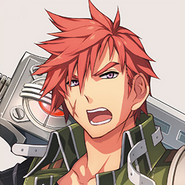 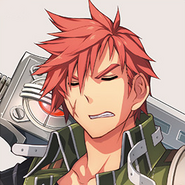 Link attack portrait
Add a photo to this gallery 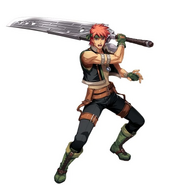 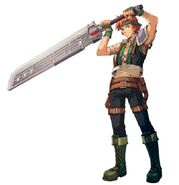 Retrieved from "https://kiseki.fandom.com/wiki/Agate_Crosner?oldid=50611"
Community content is available under CC-BY-SA unless otherwise noted.