Kiseki Wiki
Register
Don't have an account?
Sign In
Advertisement
in: Characters, Trails into Reverie Characters, Kuro no Kiseki Characters,
and 5 more

Orbal staff
v · e
Agnès Claudel (アニエス・クローデル), as she is publicly known, is a first-year student at Aramis High School in Edith, Calvard. She was first introduced in Trails into Reverie and made a proper appearance in Kuro no Kiseki.

Agnès is a young woman with light blue eyes and beautiful long blond hair, tied with braids, black ribbon and reaching her waist. She wears a cream coloured coat fastened with a thick leather belt under her bust and a smaller one on her arm. Beneath this, she wears a coral coloured long turtle-necked jumper with a black lining and small pendant around her neck. Agnès also wears black tights, brown thigh high leather boots and a crimson beret.

Her second outfit consists of a loose deep red blouse worn beneath a white coat with puffed sleeves and a frilly black hem. she no longer wears the tights, instead opting for a grey plaid skirt and matching knee high boots with red socks. Her beret is now black and her hair ribbons are light blue.

Agnès uses an orbal staff in battle. it has a collapsible functionality, allowing it to be stored away easily. The top of the staff has a staff gem-like installation as well as a large silver hoop.

Agnès is a girl with a neat and gentle atmosphere, but great willpower behind her cool eyes. Agnes also doesn't like when people are being bullied. Despite being relatively naive to the darker aspects of the world, Agnès shows a lot of courage in standing up for her morals and the goodness in other people. She balances the expectations of herself as a student with the work she undertakes at the solutions office and looks after the health of her co-workers around her.

As Agnès develops her confidence in working in the darker aspects of the world, she learns the world is not as clear cut into good and bad sections and she deftly manages to negotiate and solve a variety of cases tactfully and usefully.

Agnès is the daughter of the president of the Republic of Calvard, Roy Gramheart. This makes her true name Agnès Gramheart. Also of note, Agnès is the great-granddaughter of the famous C. Epstein's through adoption and retains his heirlooms, his journals. As part of the protection program, Agnès uses her mother's maiden name 'Claudell' which is in turn a way of honouring Epstein's legacy. Agnès mother has passed away, leaving Agnès and her father. The two have notably become more distant since this happened.

Agnès is no relation to the titular character of Sunshine Agnes, but it is a book she enjoyed reading as a child. She takes an orbal staff self-defense course as an elective at her school, and is also a member of the student council. While working alongside her close friends, she strives everyday in the General Affairs department.

Upon learning that someone stole the orbment left to her by her great-grandfather, who passed away due to certain circumstances, Agnès avoided consulting the police and Bracer Guild for some reason, and instead put in a request at Arkride Solutions Office.[1]

Agnés makes an unnamed appearance in the Beyond the Genesis episodes. She is a young girl who comes to Renne Bright's defence when she sees Ronald Griffith was harassing her. Renne does not make any aggressive moves for her sake. By the end of the episode, Agnés is brought onto the student council.

Agnès begins the story searching for the Oct-Genesis, a series of antique proto-type orbments developed by her grandfather, with the knowledge that they must be brought together to avoid a certain fate. Having no luck finding anything about them online via the Orbal Net, she turns to back channels recommended to her by Renne and in doing so comes across the Arkride Solutions Office. Forearmed with knowledge of Van's weakness to sweets, she convinces him to take the case.

She visits the office and consults with Van Arkride, who accepts the case and they hunt down the first Genesis. Agnès is initially shocked at the underworld dealings Arkride works with but soon comes to understand their necessity. With the need to explore monster-filled subways and ruins, and the inclusion of police and a murder into the sequence of events, Van is eager to make Agnès stand aside. She refuses and continues to aid Van due to the importance of her great-grandfather's legacy to her and her own moral compass. The first Genesis they recover introduces a unique phenomenon where Van is able to shift into Grendel and the hollow core AI Mare manifests in the real world.

Even though the most dangerous mafia Calvard is currently facing, Almata is heavily involved in the possession of the Genesis units, Agnès resolves to join Van as a temporary worker whilst they are recovered.

Agnès balances part-time work at the Solutions Office with her schoolwork, helping out on days off. She gradually builds her understanding of the way van works on the borderline between the light and the underworld and slowly grows out of her naivity. She develops a strong bond with van and the rest of the party as they are recruited. She accompanies Van across the Republic and they slowly recover the majority of the Genesis after several dangerous run-ins with Almata. Agnès brings the first genesis with her as it glows when clues relating to its brethren are at hand. Her fellow students and childhood friends at first do not understand Agnès' compulsion to work at the Solutions Office (particularly as they are aware of her background) but gradually accept her position.

When Almata bring the tension of the world to knife point after they reveal a reactor weapon capable of removing a village from the map, Agnès has strengthened her resolve and experience to the point where she feels confident to make decisions and move independently. She states her resolve in front of her father, affirming her choice to take the opportunity to expand her knowledge and her intentions to come back safely to the best of her ability, which he accepts and advises her on. Agnès would later exploit a loophole in the death game, having arranged for the children of the city to escape in safety aboard Sherid Asverl's airship. Even if the effort was all for nothing, she is glad she was able to use her abilities to create some insurance.

Agnès drives the final effort to recover Van from the Infinite Boundary, refusing to accept he is gone. She implores Mare to help them reach him and they make it to the Boundary where they successfully recover Van. Agnès states she has to return to Aramis for the New Year and the preparations for the scholastic festival, but intends to continue working with Van, much to his chagrin. 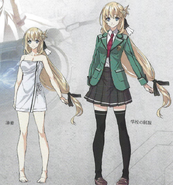 Year of the Tiger DLC costume