Aina is a woman with blonde hair styled into ringlets in the back and with bright purple eyes. She wears a two piece frock with the upper half comprised of a beige top with translucent sleeves and a cross woven seam down the center and the lower being layers of blue and red fabric connected by a beige band. She wears cream-coloured slip on shoes.

Aina is the receptionist at Rolent's Bracer Guild. She is friends with Scherazard Harvey and appears to have a terrifying alcohol tolerance level.

Before her formal character, Aina was a nervous young woman until her grandfather's death and subjugated to inherit his fortune. She was distrustful towards everyone because her relatives only had eyes for the inheritance and could care less of her being. After meeting Schera who sympathized with her own background, Aina regained the value of trusting others even if by one single step.

Aina first appears when Joshua and Estelle Bright come in for their Bracer Exam. She gives them their Bracer Notebooks and registers them with the Rolent Branch when they pass the exam.

As Estelle and Joshua are about to head for home, Aina comes and asks them for help because 2 boys (Luke and Pat) had gone missing and that they were apparently headed for Esmelas Tower. She then stays behind and alerts Cassius Bright to the incident as well. After the incident with the missing boys is over and Cassius leaves for Bose, Aina can be seen in the Bracer Guild and can be used to report the completion of quests.

When Estelle, Joshua and Schera successfully retrieve the stolen Sepith ore from the Capua family, Aina gives Estelle and Joshua their first recommendation and informs them that they have to travel to all of the other branches and receive their recommendations to become a Senior Bracer.

After Estelle and Joshua leave for Bose, she is not seen or heard from in the game again. But, Aina is mentioned several times throughout the story when Olivier Lenheim and Scherazard Harvey become party members again in the final chapter.

Aina is first seen when Estelle comes into Bracer Guild after having run away from Grancel Castle because of Joshua's disappearing. She worriedly asks Estelle what she is doing here and realizes something is up when Estelle starts acting weird. She then asks Father Kevin Graham to watch over and take care of Estelle.

She continues to run the Rolent bracer branch, requesting Estelle's assistance with the Mist and coma incidents and is later delivered a Zero-Field generator to get the Guild's telephone working.

In a Memory door, Aina's arrival to the Bracer Guild is chronicled. Following the death of her father, Saul, he had stipulated a will that allowed her to claim his wealth. She had to arrive to the castle to claim the will, but one of her uncles had hired a group of jaegers to prevent her from doing so, wishing to claim the mira for himself.

She attempted to sneak into Grancel Castle, but the castle was surrounded by the jaegers. She bumped into Scherazard, who initially helped her out of pity. They were able to avoid most of the jaegers by engaging in small scuffles or sneaking past them; Kurt Nardin and Gundolf helped dispatch the jaegers outside the castle. Aina worked with Scherazard to dispatch the remaining jaegers, after which she confronted her uncle and smacked him out cold with her suitcase.

Arriving in the castle, Aina quickly signed the paperwork and made Scherazard her witness. With her father's inheritance legally hers, Aina then requested another application form, donating all of the mira from the will to Queen Alicia's welfare foundation. The two later celebrated Scherazard's promotion to senior bracer at a bar.

In Trails into Reverie, Extra Chapter: "Beyond the Reverie" (夢幻の彼方へ), Aina calls Scherazard the day before her wedding. She informs her that she has transferred to the City of Grancel branch, taking over the post from Elnan, who will transfer to the headquarters in Leman. She lets Scherazard know she won't be able to make it to the wedding and congratulates her friend by phone instead. 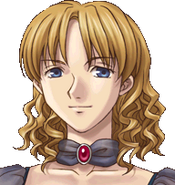 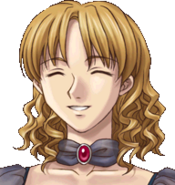 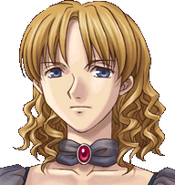 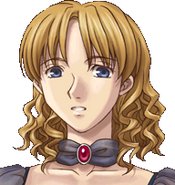 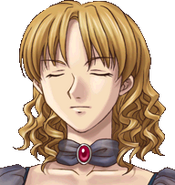 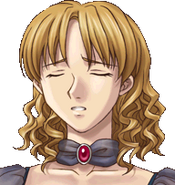 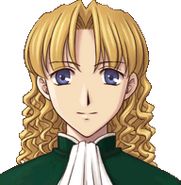 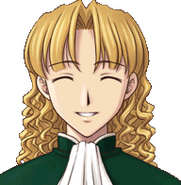 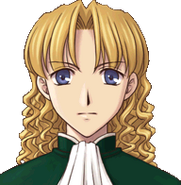 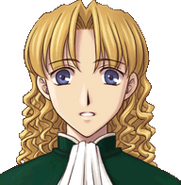 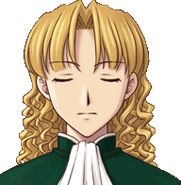 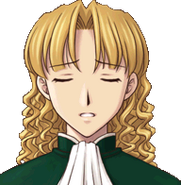 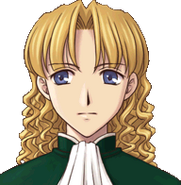 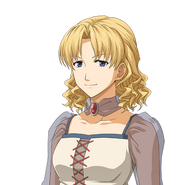 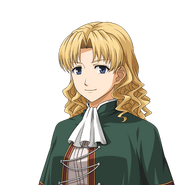