v · e
Alan (アラン) is introduced as a student at Thors Military Academy.

Alana is a young man with reddish brown hair and yellow eyes. As a student of Thors, he wore the standard commoners' uniform, consisting of a green and white blazer, tan trousers, white shirt and red tie. After enrolling in the Imperial Army of Erebonia, he wears a standard officer's uniform consisting of purple, black and gold.

Stubborn and free spirited, Alan shows to be very competitive, spending his day in training for pursuing strength. At first, he believed Rean Schwarzer to be like the other nobles after seeing him training but proven wrong later. After that, Alan began to admit that he had feelings for Bridget, but felt like they are two worlds apart due to their social status. Eventually, Alan was courageous enough to be loyal towards his devotion for the person he wants to protect the most.

Alan was born in the same town as Bridget. They went to the same Sunday School until Bridget had to move away. They would not be able to see each other until they both enrolled at Thors Military Academy in March S.1204. Alan was assigned to Class IV for commoners. He signed up for the Fencing Club.

In June S.1204, Alan and Patrick T. Hyarms faced off with a fencing match. Patrick continuously emphasized he was holding back and still bested Alan. Losing the match crushed Alan's confidence. He rapidly develops a disgust for nobles and initially shuns all of them, including Rean. Despite this, he eventually accepts Rean's help and reveals the origin of his disgust for nobles. His frustrations also tie-in with Bridget, a first year of Class II for nobles. He considers her good at everything he fails at. His 'disgust', however, was actually the result of his failed attempts to have her notice him. After he apologises for taking out his aggression on her, the two grow steadily closer.

Following the outbreak of the Erebonian Civil War, Alan escaped from Trista with Bridget but lost contact with her along the way. He instead teams up with fellow Fencing Club member Loggins and camps at the East Trista Highway to find a leak in the information network Noble Alliance so he could sneak into Trista. After Class VII helps them out, they board the Courageous where Alan assumes the role of gunnery officer. Bridget will not board the Courageous until Alan is on board.

His long-awaited reunion with Bridget helps him to confess his feelings for her. He promises that nothing would ever get between them and that he will always protect her.

After his graduation, Alan enlisted in the Imperial Army of Erebonia, being assigned to the Fourth Armored Division as a warrant officer.

He's first seen posted in Dreknor Fortress when Rean, Laura, Elliot and Fie pass by for a visit while trying to investigate the society's presence in Sutherland. Alan recognizes them only after he gets close, upon which he learns of their visit and brings them inside. Following a short conversation, Neithardt soon arrived and Alan returned to his post.

Alan remained in the military and is first seen in Trails of Cold Steel IV at a military parade at the Erebonian capital Heimdallr, piloting his Drakkhen unit. Although he found the event overblown, he continued to serve to fulfill his duties as a soldier and for Bridget. He noticed her in the crowd and gave her a nod.

Sometime after the military parade, Alan began suffering from the effects of the Erebonian Curse, and his Drakkhen unit was replaced with a Melchia unit. He spent some time with Bridget at Mishelam Wonderland before returning to his post. He was later seen overseeing a shipment of supplies at the fortress and berated the delivery crew after one of the men stated that he was relieved not to have been drafted.

Alan soon stumbled into Rean and Class VII by chance after learning of intruders. He considered Rean to be a traitor and attacked him with two subordinates, only to be bested and knocked unconscious in the process. After Class VII bested Olaf and Neithardt, Alan came back to his senses and requested permission to chase after the Merkabah. Olaf refused his request, causing Alan to protest his decision, but Neithardt stopped him.

Alan later requested a transfer to the Second Armored Division, which was granted, much to Bridget's concern, as he would be fighting on the front. He became proficient enough to link at least two Sorge units alongside his Melchia unit. He met with her outside Crossbell; by chance, Class VII had also arrived. Alan was unamused by Rean's presence and threatened to arrest the him and the others. Rean, seeing that he was fully consumed by the curse, opted to help him by bringing most of the academy alumni, including Patrick, to bring him back to his senses. Initially enraged by Patrick's remarks, Alan fought him and Rean, only to be defeated once more. Seething with his inability to protect Bridget, she soon slapped him; coupled with his former classmates' reassurances, Alan realized his mistake, lifting the curse. Olaf was able to return Alan to the Fourth Armored Division following the incident.

Rean and his party encounter Bridget and Alan in their house in Heimdallr. With Alan's own military duties, it makes it difficult for the pair to see each other. Alan mentions that some elements of the military are conducting secret operations behind the scenes. 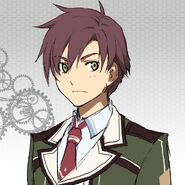