Kiseki Wiki
Register
Don't have an account?
Sign In
Advertisement
in: Characters, Engineers, Trails in the Sky FC Characters,
and 2 more

Male
v · e
Albert Russell (アルバート・ラッセル) is a famous orbal engineer working at the Zeiss Central Factory in the City of Zeiss, known throughout Zemuria as the 'Father of the Orbal Revolution'.

Albert is an older man with pale blue eyes and two tufts of white hair sticking out from the sides of his head, along with a long moustache. He wears a gray shirt, red trousers, rolled up to reveal his shins, a teal cravat and a small brown jacket. Various belts and straps with tools hang on his person and he wears both steel toe-capped boots and fingerless gloves.

Albert Russell has a rather eccentric personality. He can spend days on end working on experiments and new devices, and can get so caught up in his work that he'll fail to notice someone walking in. Some of his experiments have caused some problems, however, much to the bereavement of his superior, Factory Chief Murdock. These experiments in question also make those acquainted with him to often consider him to be a mad scientist.

Despite his eccentric nature, he loves his family and cares deeply for them. In particular, he often dotes on his granddaughter Tita Russell as she shares his interest in machinery. Unlike his peer G. Schmidt, whose selfishness for his research puts him ignorant of any potential consequences, Albert's devotion towards machines does not keep him from talking about them as daily conversations, showing his deep love for his family.

Albert Russell is one of the three famous disciples of Professor C. Epstein. following his death, he helped establish the Epstein Foundation before disagreements lead him to come to Liberl and establish the Zeiss Central Factory by working with the Zeiss Clockmaker's Union.

He is one of the foremost researchers in the field of orbal science and Engineering. He is known for his achievements in bringing the Orbal Revolution to Liberl and the rest of the Zemurian Continent. He lives in Zeiss with his granddaughter, Tita, while her parents are abroad.

Albert Russell is first introduced working at his home. He apologizes to Estelle and Joshua after mistaking them for employees and and sets about trying to help them identify the Black Orbment in their possession. When he tries to scan the Black Orbment, Albert ends up activating it and triggering a town-wide power failure, which leads to Mr. Murdock coming in to scold him.

The next morning, he dubs the power failure as an 'Orbal Shutdown Phenomenon', and in his 3rd floor workshop, he tries to cut the Black Orbment open with a Orbal buzzsaw but fails. After sending Estelle and Joshua to retrieve a combustion engine, he some minor success at cutting it. While Estelle and the group are in Elmo Village sorting the pump with Tita, the central factory is attacked by a mysterious group and Professor Russell gets kidnapped. He is then taken to Carnelia Tower where he is forced onto an airship to Leiston Fortress.

At Leiston Fortress, Albert Russell is forced into helping with experiments on controlling the Black Orbment by Alan Richard of the Intelligence Department. When Estelle, Joshua, Tita and Agate arrive to break them out. Albert joins them. Upon escaping, Albert reveals everything that he has discovered during his time in imprisonment. That the Black Orbment is actually called the "Gospel" and that Alan Richard is planning to overthrow the monarchy. He and Agate then decide to leave Estelle and Joshua to go into hiding and takes Tita with them. Before leaving though, he requests that Estelle and Joshua warn Queen Alicia of the upcoming threat.

In the final chapter, Albert appears again to help Estelle and co. access the ruins where the Aureole sleeps, after they take back Grancel Castle. After hearing the details from Joshua, Albert goes with the group into the ruins below and offers his services as a Orbal Technician should they need it. At the mid-way point of the ruins, Professor Russell establishes another base camp. He then meets with Cassius Bright after he shows to help Estelle and co. fight Reverie.

He is then present at the Queen's Birthday Celebrations where he attends the Queen's speech, he then goes and buys some ice-cream with his granddaughter. Later that night, Albert tells Estelle that he has retrieved the Gospel and that he is planning on analyzing it the moment he gets back to Zeiss. He then listens to Joshua's harmonica playing.

Russel is encountered again in Zeiss where he proposes his theory that the Gospel units are too small to be draining orbal energy and they simply send it elsewhere. he helps the group build a device that can target the epicentre of the earthquakes troubling the region.

Albert's expertise results in him being brought onboard the Arseille as they investigation the strange occurrences at each of the Tetracyclic Towers. After all four are deactivated, he warns Julia Schwarz to land the ship as the Liber Ark returns to to their dimension and begins a large scale Orbal Shutdown Phenomenon. Albert works hard to develop a Zero-field generator device that will allow orbments to work, and gives Estelle's group enough to get the Bracer Guilds' phone lines back up.

He returns on The Arseille having enabled it to fly with another Zero-field generator and travels with the group to the Liberl Ark. When it crashes, he helps with repairs, but tags along to the Axis Pillar for 'sightseeing'. Albert helps decode the terminals they find around the city. He flees the collapse of the Ark back to the Arseille and escapes the city, watching out for Estelle and Joshua.

Albert immediately gets into an argument with Erika Russell when she and her husband Dan Russell return to Zeiss. The source of the arguments seem to be focused on Getting Tita into danger, but it turns out letting her get near Agate Crosner bothers Erika more. they continue arguing, including about coffee. They do however collaborate on the Orbal Gear project, something uncommon enough for Factory Chief Murdock to shiver and start praying about.

He is part of a large scale investigation into the ruins of the Liberl Ark. 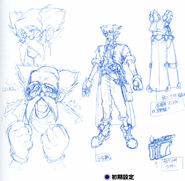 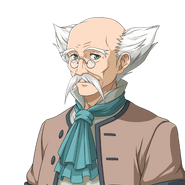 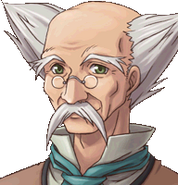 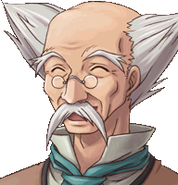 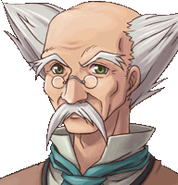 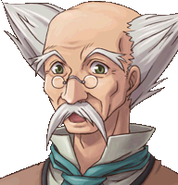 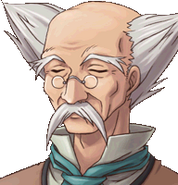 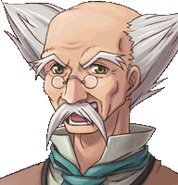