Alfin is a young woman with long wavy golden blonde hair and light blue eyes. A younger Alfin wore a long braid in her waves of hair, along with a red bow. She also wore a red and white dress with lots of frills and ruffles, a lavender bow, matching red boots and a red cropped jacket over.

An older Alfin keeps the colour scheme, but now wears a longer red dress with a open bust and split down the middle. She now wears a white bow with a blue gem, wing-like circlets in her hair and a lavender sash. She has replaced her red boots with red high-heeled shoes.

Alfin is a mischievous, angelic, young maiden who owns a truly kind heart. She is kind and caring towards everyone that she meets and cares deeply about her country and the issues brought about by its social divisions. She is also not afraid to publicly scold people on their behavior and over the course of the Civil War, becomes more resolved and determined to stop it.

Alfin can also be a bit mischievous and precocious in her own right as she loves teasing Elise Schwarzer on her crush on her older brother, Rean and likes pulling pranks. It is also implied that she has a crush on Rean, but she will put Elise's feelings above her own. She also has a preference for 'boys love' novels.

Alfin gets along well with her older brother, Olivert, who has a similar personality to her and dotes on her brother, Cedric. She also deeply cares about her parents. After the Civil War, Alfin begins to develop growing concerns and anxieties not only about the changes in Cedric's personality, but Olivert and the Vander family's treatment at Giliath's hands and for the fate of her country which has become more isolated due to the annexations of North Ambria and Crossbell.

She attends St. Astraia Girls' School, where she became friends with Elise Schwarzer. She enthusiastically greets Rean when Class VII visit St. Astraia, having heard so much about him from Elise.

During the Erebonian Civil War, Alfin and Elise are taken to Ymir Village by Toval Randonneur and reunited with Rean Schwarzer in the process. However, she and Elise were later captured by Altina Orion and Vita Clotilde.

When Rean boarded the Noble Faction's flagship Pantagruel, Alfin gave him advice that helped him learn to control his ogre Form, allowing them to escape the clutches of the top warriors of the faction. She was later brought back to the Courageous as her personal ship and reunited with her half brother Prince Olivert Reise Arnor. Princess Alfin became the voice of Class VII and Thors Military Academy students in the civil war, where they were assigned to counter the Noble Faction in the Eastern Erebonia.

After the Erebonian Civil War, Alfin graduated into the high school of St. Astraia Girls' School but is burdened by anxiety over the sudden change of her twin brother Cedric, and the cold way her older brother Olivert and the Vander Family are being treated. Because of this discomfort, she postponed her debut into high society for another year to find a suitable partner for her entrance.

Alfin is still beloved by the Erebonian populace and even gains support from the inhabitants of annexed territories. She attends the Imperial Inspection in Crossbell and even tries to help out when Ouroboros enforcers attack, before being persuaded not to by Rean.

She later makes her debut into society at the party in Valflame Palace's Esmelas Garden after the operation to find Calvardian agents in the city before the Summer festival is concluded. So as to not give society the wrong idea, and to help Elise out, she and Elise both invite Rean to be their first dancing dancer.

Following the start of the Great Twilight, Alfin was separated from her mother and was initially supposed to be sent to Saint-Arkh under Wilhelm Ballad's custody with Tita Russell, but was diverted to Dreknor Fortress where they were placed under the custody of the Fourth Armored Division.

Rean, who had returned to normal by this time, along with Class VII, found and retrieved her and Tita from the fortress. Alfin later reunited with Elise at Thors Branch Campus.

Following the end of the Great War, Alfin worked alongside Olivert to restore the public's trust to the royal family when it was revealed that Cedric had willingly supported Osborne.

Alfin resumed her normal public affairs. When Rean and his party come to Heimdallr, Governor Carl Regnitz requests a meeting in the Der Himmel Hotel, where he is accompanied by Alfin. She decided to get involved after a discussion with Governor Regnitz because the case involved her brother. They talk of the new 'C''s identity, but the conversation soon turns to the main order of business. Alfin has heard from her contacts at the Girls' school that some elements of the military have been acting strange. After the meeting it is agreed that rest is part of her duties, and she heads back to Valflame Palace.

Alfin is one of the characters that can be summoned to the Infinity Corridor. 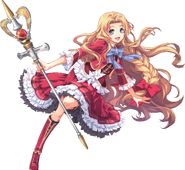 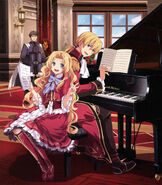 "One Afternoon With Certain Siblings" 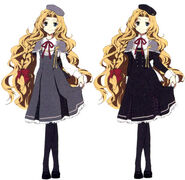 A promotional screenshot of Alfin with Elise and Olivier.

A promotional screenshot of Alfin with Elise.

Alfin, along with Olivert and Mueller helping rebuild trust in the Imperial Family 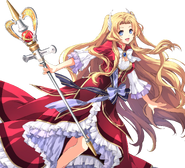 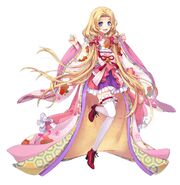 Festival S-Craft in Akatsuki no Kiseki. 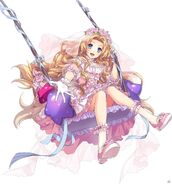 Spring S-Craft in Akatsuki no Kiseki.