Orbal Bow
v · e
Alisa Reinford (アリサ・ラインフォルト) is the daughter of the Reinford family, the largest heavy industry corporation in Erebonia, and is introduced as a member of Thors Military Academy's Class VII.

Alisa is a young woman with long blonde hair and scarlet eyes. She wears parts of her hair tied up with violet floral decorations, and later, a blue scrunchie, all with feather-like attachments.

As a student of Thors, Alisa wore the Class VII red uniform, consisting of a red and white blazer with padded sleeves and a green checkered skirt. She also wore a pink turtleneck shirt and brown leather thigh-high boots with a triangular patterned edge.

After graduation, Alisa wears a white minidress and jacket combination with black accents and matching thigh-high heeled boots. She has a red belt.

Alisa uses a large white orbal bow in combat. It has a large turquoise orbment in the centre of its recurved handle and features three antenna prongs sticking out from the middle of the shaft.

Alisa is resolute and self-assertive, as well as being a brash and impulsive young woman. She is capable of holding grudges for a long time. Alisa also gets easily flustered by unexpected events, and gets noticeably upset when asked to room with boys, or when members of her family show up unexpectedly. Despite all this, Alisa tries her best to make her friends happy, and even if she denies it initially, cares deeply for all of them.

As someone who gets to the point, she leaves a brash impression on those meeting her the first time. She is actually a good-natured and kind woman on the inside, one who cannot overlook those in trouble.

Alisa is the only daughter of the Reinford family, owners of the Reinford Group. Alisa herself states that, when her father was alive, she and her family were genuinely happy. Her father passed away when she was 9, which left her in the care of her maternal grandfather, Gwyn Reinford; her mother, Irina; and the family maid, Sharon Kreuger. Following her father's death, Irina began losing herself in running the business, and Alisa's family life quickly fell part.

During the Nord Highlands field study, Alisa states that she was treated poorly by the other kids, due to her status as heiress of the Reinford Group. As such, she did not have many opportunities to make friends.

She enrolls at Thors Military Academy to find her own path in life even though she is worried over her relationship with her mother, After the incident at the Old Schoolhouse, she becomes an unfortunate acquaintance of Rean Schwarzer even though she despises him. She reluctantly apologizes to Rean for how she had been treating him the first few weeks of their acquaintance. Alisa reveals that she had been trying to apologize to Rean since then, but hadn't been able to.

While in the Nord Highlands, she confides in Rean that she misses her old family and yearns for the past. She expressed concern that the company had become more important to her mother than family ties. When Alisa reveals that the railway guns were manufactured by the Reinford Group, she states that both her mother and the company had crossed the line. She also says that she has no regrets about joining Class VII, as she feels that the experience has let her grow as a person. Rean and others come to learn that despite everything that has happened regarding her mother, Alisa cares deeply for her family and friends.

She has a sisterly relationship with Sharon, who enjoys teasing Alisa and getting rises out of her. She is also close with her grandfather, Gwyn, although she felt betrayed by his supposed abandonment of her and the Reinford Group.

During the October War, Alisa flees to the Nord Highlands and stays with her grandfather. She is amongst the second group of classmates Rean reunites with after using Valimar to travel there. Together she helps the group confront Bleublanc and Altina Orion on top of the watchtower and prevent a large scale war from breaking out.

Alisa is further instrumental in their efforts when she plays a key role in thier three step operation to help remove Roer from the Noble Alliance's grip. This involves helping Angelica Rogner confront her father, storming the Reinford Headquarters to expel Heidel Rogner and rescuing her mother Irina from the Eisengraf located in the Sachsen Iron Mine.

She would also partipciate in the liberation of Trista, and the battle in Heimdallr at the Infernal Castle.

“I'll fight to make sure the weapons made by my family never need to be used for anything besides protecting people!”

After the Erebonian Civil War, Alisa went back to Thors Military Academy to hastily complete her education. She also gets into a relationship with Rean who is still suffering from Crow Armbrust's death and the revelations about his father (if the player chose Alisa as Rean's partner) and helps him slightly recover. However, due to feeling a great sense of responsibility and duty to her family, Alisa decides to leave Thors to help her family rebuild the Reinford Group.

After graduating, she returns to the Reinford Group to start working as a General Manager of the company's Development Division. Within the Reinford Group, Alisa takes up the duties as senior manager. She is responsible for the ARCUS II and the division dedicated to orbal staffs. Her current position within the company is the result of her abilities as a person, not merely her rank as the owner's daughter. She served as the liaison between the various military academies and the Epstein Foundation, working closely with Tio Plato. She also met with Elie MacDowell after the fight with Ouroboros in Crossbell.

In Trails of Cold Steel III, Finale: "For Whom the Bell Tolls", Alisa's life crumbled away before her eyes. She discovered that her father, Franz Reinford, had not only been alive all this time, but also had been collaborating with Giliath Osborne in secrecy. Furthermore, with her father turning out to be alive, Reinford maid Sharon returns to his side, forcing her to battle both her former maid and classmate, Siegfried. During the battle, she arms herself with the Orbal Gear EXA,[JP 1] developed with Tio and Tita Russell.

Sharon's departure from her side, her father's transmutation, Millium Orion's death and Rean completely losing control, Alisa entered a state of shock. Initially hesitant to even pick up the Imperial Chronicle, she regained her will to get back both Rean and Sharon through the enthusiasm of New Class VII.

During the events of the game, Alisa and Rean investigate the remnants of Black workshop activity going on inside the Reinford Group, in particular the existence of the Fifth Developmental Division. They discover it is a network of disgruntled employees, those who have been coerced and other administrative anomalies and together they rectify the situation and rid the company of the Workshop's influence.

After the return of both Rean and Olivert Reise Arnor, she and the rest of Class VII infiltrated the Gargantua and convinced Sharon to return to her side. At the end of Trails of Cold Steel IV, Alisa was given a last chance to meet with her father, as the curse placed upon him by Ishmelga was lifted. With the curse on Erebonia lifted, she joins the rest of her friends at the wedding of Olivert and Scherazard Harvey.

Alisa has a chance to receive closure when she helps George Nome investigate a hidden Black Workshop facility. They discover a hidden message from Franz and a back up copy of Airgetlam.

Alisa is working in Crossbell during the game, with Sharon assisting her to dismantle Reinford's war infrastructure in the state, including at the arsenal. She is present when the Supreme Leader Rufus Albarea takes over, and links up with Lloyd Bannings's team later when she saves them from a large advanced archaism outside the Reinford Arsenal. She then joins their investigation and learns F. Novartis had taken over and remodelled the facility. She helps the party work through the facility, working with a mysterious second party via the terminals in order to get access. They confront Novartis and escape the burning factory afterwards.

Alisa is present for the final battle against Elysium and Reverse Babel after helping to expel the Black Guard from Crossbell. 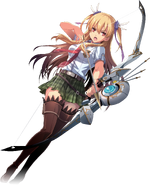 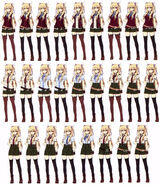 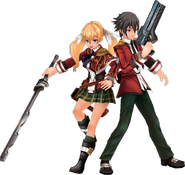 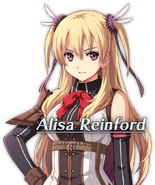 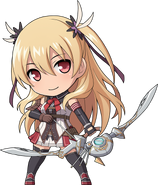 S-Craft cut-in of Alisa in Trails of Cold Steel III.

A screenshot from Trails of Cold Steel III featuring Alisa and Tita Russell.

A screenshot from Trails of Cold Steel III featuring Alisa and Sharon Kreuger.

Alisa using her bow in Trails of Cold Steel III.

A screenshot from Trails of Cold Steel III of Alisa sitting next to Rean Schwarzer, with Ash Carbide speaking to them. 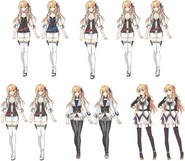 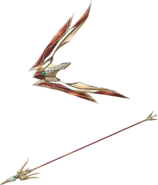 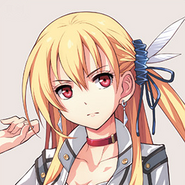 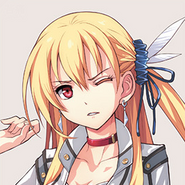 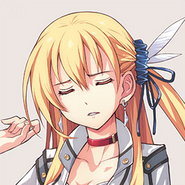 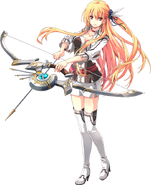