Kiseki Wiki
Register
Don't have an account?
Sign In
Advertisement
in: Characters, Bracers, Eight Leaves One Blade school,
and 5 more

Wind
v · e
Anelace Elfead (アネラス・エルフィード) is a bracer affiliated with the Bose branch in Liberl. As the granddaughter of the famous swordsman Yun Ka-fai, Anelace specialises in the Eight Leaves One Blade school of swordsmanship.

Anelace is a young woman with light brown hair and lavender eyes. She wears a yellow ribbon hair band in her hair. During the Liberl arc, Anelace wore a short red minidress with a belt around her waist. This dress was covered in blue armor plates: one around her chest, one on her right shoulder and several around her waist. She also wore above-knee stockings, tan leg warmers and elbow length black coverings ending in white fingerless gloves.

An older Anelace now wears a white shirt over a black vest, with a cropped denim jacket and blue fingerless gloves. She has a pleated red miniskirt and black thigh-high stockings, along with brown boots.

Anelace uses a katana in combat. She was given 'Jinu', Cassius Bright's old blade.

Anelace has a bright cheerful personality. She can be kind to others and is really talkative. She can also be a bit ditzy and has a hard time waking up. Anelace has a massive love for all sorts of cute things. She also sees Estelle Bright as her rival.

Anelace is the granddaughter of Yun Ka-fai who is the master of Eight Leaves One Blade school of swordsmanship and as such has studied under him since she was young. However, she is still not as powerful as him. During her Bracer training, Anelace studied under Scherazard Harvey and considers herself still a rookie.[Note 1]

Anelace is first introduced when she greets Scherazard, Estelle and Joshua during one of their visits at the Bose Bracer Guild. After this point, Anelace is mostly seen hanging out at the Bracer Guild. However, in the final chapter, Anelace is spotted again in Grancel where informs them that she, Kurt, Grant and Carna are going to be participating in the Martial Arts Tournament.

After winning the first round of the tournament, Anelace and the others inform Estelle that the Martial Arts Tournament was originally an individual tournament, but somehow got changed into a team tournament at the last minute. She and the others then suggest to Estelle that she and Joshua should join Zin Vathek's team if they want to see the Queen; as he needs team members. Anelace and her team are then seen losing to Estelle in the Semi-Finals and cheer her team on in the finals. They then congratulate Estelle, Zin, Joshua and Olivier after they win the tournament. .

After Estelle and the others come back from Grancel Castle, Anelace is summoned to the Bracer Guild where she finds out about the rescue operation to rescue Princess Klaudia and the other hostages. She then participates in the operation by distracting the guards and taking them out. After Princess Klaudia is rescued, Anelace then participates in the Grancel Castle recapture operation and helps retake the Castle. She is then present when the Queen thanks them during the Queen's Birthday Celebration Speech and is present during Estelle and Joshua's promotion ceremony to Full Bracer.

After the speech, Anelace can be sighted in the Grancel Department Store shopping with Carna and Scherazard.

Anelace is introduced joyfully sparring with Estelle Bright in Le Locle canyon, the international Bracer Guild training grounds where she and Estelle have come for training. Anelace explains that she has only really been a Bracer for 6 months and that she is still a newbie in many ways, but when she heard the news from Schera, she decided to tag along too. During the course of their training, they visit the Balstar Channel, Saint-Croix Forest and then after an attack by jaegars, Grimsel Fortress where they confont the otehr bracers who are disguised, including Kurt Nardin. After some self-loathing on the pair's part, Kurt consoles them and then officially congratulates them for passing the Le Locale Training Program. They then head back to Liberl.

Anelace and Estelle are split up to two teams that will be patrolling the country, with Anelace pairing up with either Scherzard or Agate Crosner depending on who is picked by Estelle. they are then infrequently encountered around the country, including at the Kaldia Tunnel,  where Anelace notices how cute Tita is and tackles her. Anelace is on the trail of old intelligence division members and the Capua Family sky bandits. They head on to Bose.

Anelace is later seen battling some archaisms. She investigates the Ravennue Mine where they are attacked by what appears to be Intelligence Division soldiers, who they then defeat. Suddenly, a mysterious figure starts clapping and congratulates the pair for their performance. Turning around, Schera and Anelace turn to see a green-haired boy who introduces himself as Enforcer No. 0: Campanella the Fool, a member of Ouroboros. He detonates the soldiers and teleports away. Anbelace cries about the soldiers before they discover they were nothing more than fakes. Kevin Graham then arrives to exchange information.

Anelace is defeated and hypnotised when she and the otehr Liberlian bracers investigate the Lakeside Laboratory. Estelle and her party confront her and free her from the control. Later, Anelace takes part in the operation to free Jenis Royal Academy when Gilbert Stein occupies it.

Anelace is one of the individuals trapped in a crystal and brought to Phantasma. A copy of Anelace is fought, turning out to be a grimoire, and the real version is freed by Kevin's party. She then joins their efforts to travel through the seven planes and return to reality.

A Memory door reveals she had travelled to Leiston Fortress on one of her days off to seek advice from Cassius Bright. Lugran wants her to exterminate all five wanted monsters in return for time off, and wanted no complaints because she had to take a days off due to eating to much ice cream a few days prior. She goes to the Fortress. She wanted to know why he had seemingly abandoned the path of the blade, and her grandfather's teachings for a staff, and is having self-doubts about it. Cassius has her train with Alan Richard, and explains that there are different styles and reasons why people sue a sword. He assuages Anelace's concerns and makes her feel better before giving her his old katana, Jinu.

Anelace was briefly shown working with Toval Randonneur following the conclusion of the Great War. 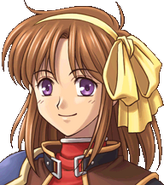 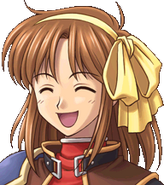 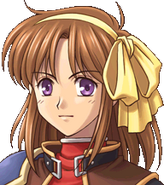 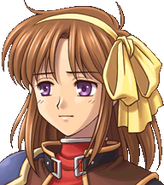 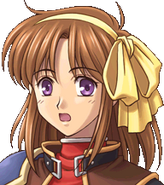 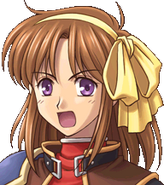 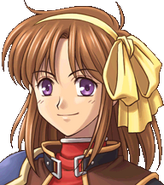 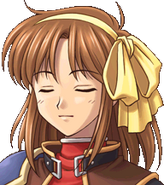 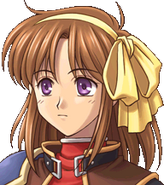 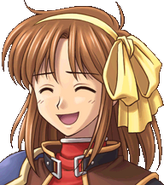 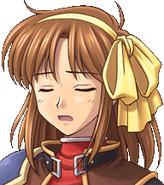 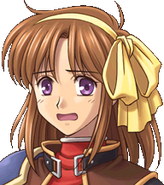 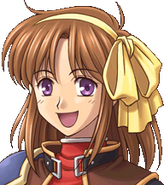 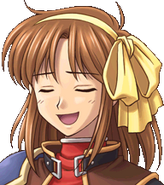 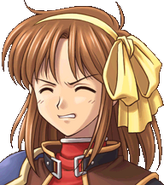 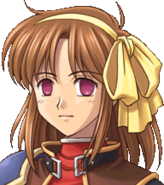 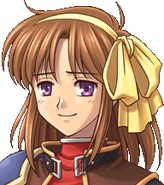 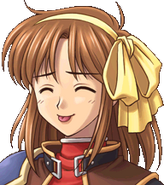 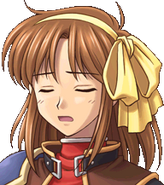 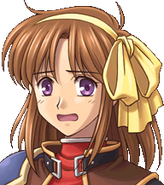 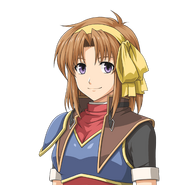 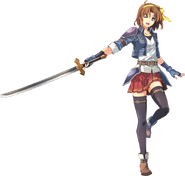 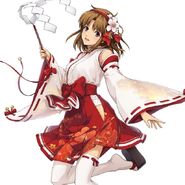