Annabelle is a young woman with red hair and turquoise eyes. She wears a black turtle-neck shirt with a long teal skirt, brown knee high boots and a dark beige doubled breasted coat. She additionally has a peaked cap and black gloves. a small pendant can be seen around her neck.

Annabelle is a determined individual who pursues what she wants in life, taking action to escape a future she didn't want. She is incredibly passionate about fishing, caring little for the trappings of nobility and instead roaming the Empire to fish.

Annabelle was born as the daughter of a viscount. She went on to study at St. Astraia Girls' School.

Annabel ran away from home in the spring of S.1204. Much to her displeasure, her father had arranged a marriage with a man of status, not disclosing any details to her. Later she finds out that she was not engaged to a man of military status, which she had been thinking all along, but to Lakelord III, the heir of Baron Lakelord II. The family's butler, Carrigan, starts to look for her.

Annabelle is first met in Celdic, where she has lost her wallet until Class VII returns it to her during their first field trip (see Lost Wallet). In Legram, she promises to catch up to Rean Schwarzer's fishing skills and surpassing him by becoming the finest angler in Erebonia. She later shows up in Roer, until she is finally found by Butler Carrigan in Trista. There she founds out about who she is really supposed to marry and promises Carrigan to return home.

As soon as she makes up her mind, the Erebonian Civil War breaks out and she is initially stuck in Trista. Eventually she and Kenneth, Lakelord III's younger brother, decide to flee Trista and head for Ymir. Own their way, however, Kenneth urges her to continue on her own as he had to do something. It is later revealed that he was trying to find a memento of Annabelle's grandmother that she dropped it in the river on their way to Ymir.

During her stay in Ymir, she challenges fellow angler Rean Schwarzer to numerous duels, including catching Ymir's Guardian and the Blue Devil.

In the spring of S.1205, Annabelle decided to cancel her marriage with Lakelord III. Neither her father would let her nor was Lakelord III, as a noble man of the Empire, willing to go back on the promise he once made. Furthermore, his position as the son of a noble marrying the daughter of a viscount weighed heavy on his shoulders. Kenneth proposed they should settle the matter in first a fishing duel by their respective vice-captains, meaning Narses on behalf of Lakelord III and Rean on behalf of Kenneth, followed by a duel between both captains. Rean gives Kenneth a headstart by catching the giant swordtail.

During the battle, Annabelle realizes that Kenneth has been thinking about her's well-being and happiness all along. After Kenneth wins the fishing duel, Lakelord III apologizes for betraying Annabelle's trust and calls off their engagement. When Butler Carrigan asks her whether she has set her eyes on Kenneth, Annabelle suspiciously denies.

In S.1206, Annabelle is acknowledged as a professional angler. She is now an official member of the Imperial Fishing Club and is currently on a 'survival fishing pilgrimage' around the Empire. It is on this pilgrimage that she meets Rean once again, and is introduced to his new students from Thors Branch Campus. While investigating the presence of metallic sounds, Rean is guided to where they came from by Annabelle who says they may have scared away the fish.

Annabelle is reluctant about showing her face at the headquarters in Heimdallr due to the trouble she caused the Lakelord family, but does attend the exhibition match between the Club and the Fisherman's Guild. She is hoping to catch the Guardian, but misses out to Rean.

After the Great Twilight, Annabelle runs into Class VII, and is searching for Kenneth who has gone missing. She mentions Lake Gala is her favourite fishing spot. Rean later encounters her on Bryonia Island on the lodge, still searching for Kenneth. She finally meets him again when it is revealed he was helping on the Courageous II, and in the Overture in Mishelam, she and Kevin share a tender moment. Kenneth states he will say goodbye so he can protect the world and their love of fishing, but Anabelle refuses to let it be goodbye and says she will be with him till the end. She tries to confess but instead ends up asking to go on a large fishing trip with him.

Annabelle and Kenneth collaborate on a entry for the Prince's wedding reception. They cook grilled salmon salmora, a dish Wilhelm Ballad can immediately taste the quality of and knows that the fish was one of the legendary Salmora children who take a special migration path. Ballard calls the other judges amateurs for not being able to discern this, after seeing their reactions to the ratio of fat. Annabelle states that the pair of them took extra special care with the seasoning and heat. When the validity of being bale to serve such rare fish is brought up, Kenneth states they have the full backing of the Imperial fishing Club and the Fisherman's Guild and finding any fish is not a problem. 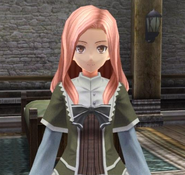 Appearance in Trails of Cold Steel I and II