v · e
Arc en Ciel (アルカンシェル) is an esteemed theatre troupe in Crossbell. Its theatrical performances are exclusively held in the Entertainment District in Crossbell City and attract countless fans across Zemuria. It is praised for its acrobatic performances and extraordinary stage settings.

It is best known for its most recent play, Golden Sun, Silver Moon.

The theatre is introduced in Crossbell city's entertainment district. Ilya Platiere and Rixia Mao are the lead performers. The Special Support Section are called in to solve a case of threatening letters made to Ilya, eventually tracking the culprit down as being Sully Atraid who is taken pity on and made to join the performance as the Star Princess under Ilya's tutelage. It is at one of the performances that the SSS foil a plot to assassinate Speaker Henry MacDowell by reaching and apprehending Ernest Reis just in time.

It is discovered that Joerg Rosenberg manufactures much of the equipment and mechanics used in the theatre from his Doll Studio in the mountains. the parts are then delivered by orbal van.

The theatre is heavily damaged in the Red Constellation's attack on the city. Shirley Orlando engages Rixia is a fight within the theatre, wherein Shirley damages the chandelier causing it to drop. Ilya pushes Rixia out of the way and has her legs crushed, and Rixia fleeing. The loss of their foremost performers puts Arc en Ciel on hiatus.

The theatre remains mostly inactive during Crossbell's Annexation. During the Great Twilight, in order to reach the Stella Shrine and the rivalry held there, the Radiant Wings hold a special performance as a distraction. Inviting all the military forces (with some Imperial Defence Force members excepting), the way is then made clear to infiltrate the Orchis Tower. The performance held at the theatre is without Ilya and Rixia, so Sully takes the lead with back up. Estelle Bright and Scherazard Harvey join in with the dancing, Elliot Craig on the violin, his sister Fiona Craig on piano,Thors Military Academy Wind orchestra, the Northern Rock group of Thors Branch Campus as well as Altina Orion and KeA Bannings on choir provide musical accompaniment . As a special surprise , Vita Clotilde, the Azure Diva, and Bleublanc join in to provide their voices.

The Arc en Ciel officially returns with a new debut performance of their three star dancers, Ilya, Rixia and Sully. this first performance is displayed around the city and serves to distract the populace and Rufus' Personal Forces while the city is retaken.

During rehearsals, Swin Abel and Nadia Rayne sneak into the theatre to watch some performances. They are detected by Rixia but do not confront her until they are outside. Meanwhile, Ilya finds a strange mask in a gift box. 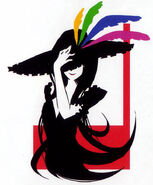