Arios is a tall man with long navy hair and brown eyes. There is a scar across his left cheek. He wears a green shirt and white trousers with a distinctive long brown and red coat with a high collar. The coat has red patches across the shoulders and down the forearms and features a thick belt which is worn loose. In addition to this, Arios wears smart brown shoes and carries a tachi, his choice of weapon in combat.

Arios is a calm individual who harbours a troubled heart from his past. He is utterly devoted to his daughter, and is willing to go to any length to try and protect her well-being, fighting for a better future for her.

Arios earned his title of Divine Blade by mastering the Eight Leaves One Blade school's second form, Gale, and enduring the final trial against his teacher just like Cassius Bright did years ago.

Arios was originally a police investigator at the Crossbell Police Department. He worked together with Guy Bannings and Sergei Lou in the same squad under the First Division. In S.1199, due to a mysterious explosion, his wife Saya lost her life and his daughter Shizuku was permanently blinded. Immediately thereafter, Arios resigned as an investigator and registered as a bracer.

Some time later Ian Grimwood, a lawyer who had investigated and discovered the truth behind the explosion, revealed his findings to Arios. He explained that the explosion was caused due to an information war between Erebonia and Calvard within Crossbellan borders. Realizing a miracle would be needed to rid the landlocked state of its curse, Arios accepted Ian's offer to work on the Azure-Zero Project in secrecy. For the sake of his deceased wife and blinded daughter, Arios was determined to complete the project.

While busy working with the Crois family's scheme, Arios' strong sense of duty urged him to continue working as a bracer. He continued to fulfill his bracers duties with unparalleled excellence and was praised as Crossbell's True Guardian Deity (クロスベルの真の守護神) for the unending support he offered to all of Crossbell.

Ultimately, his work on the Azure-Zero Project crossed paths with his friend Guy Bannings, who had been heavily investigating the details of the project. After realizing that Guy knew more than he should, Arios called Guy out to the construction site of Orchis Tower and challenged him to a deathmatch. During the battle, Arios was forced into a draw despite his combat skill due to Guy's talent at defending with tonfas. When Guy proposed a cease-fire and Arios was ready to listen to what Guy had to say, Guy was then shot from behind by Ian Grimwood. Guy passed away in Arios's arms, but was told by Guy before he died that his "successor" would one day challenge Arios. Because of this event, Arios shoulders a tremendous burden of guilt and thus identifies himself as Guy's murderer to Lloyd Bannings in Trails to Azure.

His work also met critical acclaim among members of the Bracer Guild Headquarters in Leman. They proposed to lift his status as A-rank to S-rank thereby allowing Arios to become the fifth S-rank bracer in Zemuria. Arios turned down the offer and humbly stated that he got more credit than he actually deserved.

Arios appeared several times when the Special Support Section was founded and began their initial missions. He observed the group traveling around the city, intervening only if they were in a situation that they could not get out of.

While tracing the team who was investigating reports of wolf-like monsters around Mainz, he encountered Renne, whom he knew as Ouroboros's Angel of Slaughter. He asked her if the society had sent her to Crossbell, but following the events of Trails in the Sky SC, Renne had quit and told him that she was here on personal business. Arios was relieved by this fact, but warned Renne that she couldn't keep running from "them", who had come to search for her, and her fears. He promised her that he would not inform them of her presence as long as she behaved.

When Crossbell finally declared its independence, Arios resigned from the Bracer Guild and assumed office as the right hand man of newly appointed president Dieter Crois and commanding officer of the Crossbell Defense Force. The guild commented that it was strange that Arios left a position that he was so well known for with such suddenness and no reservations, setting off alarms of suspicion among Lloyd and the SSS. Shortly thereafter, Arios reveals himself to the SSS in Mishelam as a co-conspirator in the Azure-Zero Project and handily defeats them to prevent them from interfering with the ritual involving KeA. The SSS are then arrested and placed under various forms of arrest under Arios's orders.

After the Azure Tree is summoned in of Trails to Azure, Arios acts as one of the obstacles that the SSS must overcome to continue on and rescue KeA inside the Tree. Inside his own world, Arios takes the time to answer Lloyd's questions, including why KeA was placed in the suitcase in the Black Auction and why he falsely identified himself as Guy's murderer. In the ensuing battle, Arios lost to Lloyd's determination and his close-knit team. He realized that he had reached his limits and bowed to Lloyd's incredible growth and fighting spirit.

After the disappearance of the Azure Tree, Arios worked together with the Special Support Section to liberate Crossbell from Erebonia's reign.

Arios makes a brief appearance alongside Lloyd and KeA after Class VII's field trip in the city concluded.

Arios is one of the attendees at the Erebonian Martial arts tournament, where he teams up with Victor S. Arseid. They make it to the final round after defeating strong opponents like Cassius Bright and Zechs Vander, but Rean and Duvalie's team are victorious against them.

While investigating the disappearance of Olivert Reise Arnor and Scherazard Harvey, Class VII is directed to the Nord Highlands by "C". Simulacra of Arios appear to stop them from freeing the prince and his wife. Unlike other Simulacra, who maintain many of their original's traits, Arios' Simulacra were erratic in behavior and skill. Several of them were deployed to protect important locations, but were all destroyed.

Another two Simulacra were deployed at the Crossbell Police Academy to stop Rufus Albarea. These were destroyed by the real Arios, who had arrived to the academy to pay a visit to Ian. He was able to deduce that the Supreme Leader was a fake and learned from Rufus that he intended to let the land return to normal after disposing of the Supreme Leader, prompting him to join Rufus' group temporarily. Upon learning of the whole situation by Ian, he resolved to accompany them until the task was completed. He was soon reunited with his daughter who was being kept safe by Ian in the prison.

Arios was present for the final battle against Elysium in Reverse Babel.

A full-length shot of Arios from Trails from Zero. 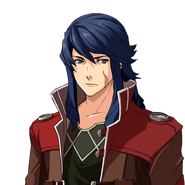 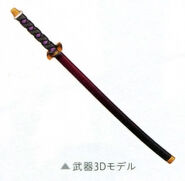 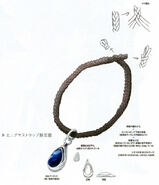 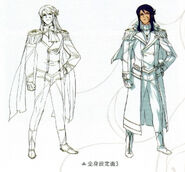 A full-length shot of Arios from Trails to Azure.

A full-length shot of Arios from Trails to Azure. 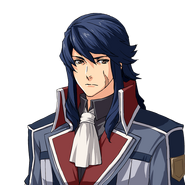 Arios with KeA and Lloyd Bannings during the Imperial occupation of Crossbell. 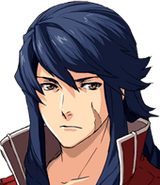 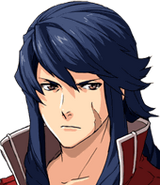 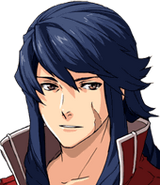 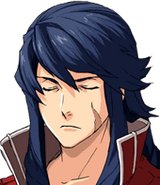 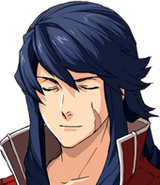 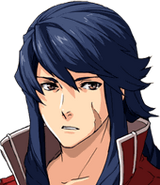 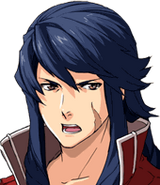 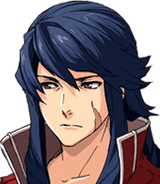 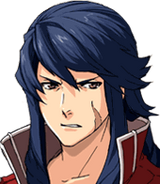 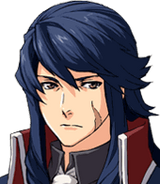 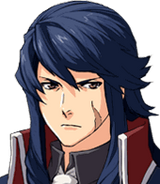 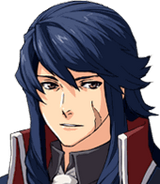 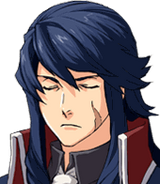 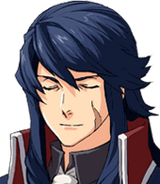 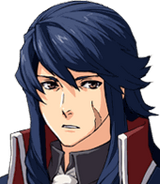 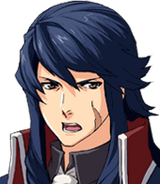 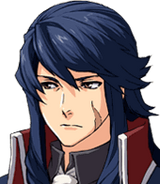 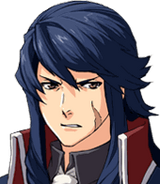 Arios with KeA and Lloyd Bannings 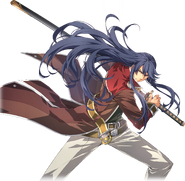 S-craft in Akatsuki no Kiseki.