Ash is a tall young man with dirty blonde hair and crimson eyes. He wears the blue blazer of the Thors Branch campus uniform, but over a red shirt and white vest, along with the black trousers. he also wears a mint green belt, silver chain and green shoes.

Ash uses an interchangeable polearm/scythe hybrid (called a switchaxe) as his weapon. It has a a long black pole with an orbal red head that can shift from an axe head to a scythe, and contains a hidden chain function.

Ash has a roguish rebellious attitude, speaking without respect to almost everyone and doing whatever pleases him, ignoring any sense of authority or repercussions. His attitude and skills are regarded as 'wildly unpredictable'.

Yet despite this rough outward appearance, Ash has a softer side which is reliable for his friends, and studious, being both academically bright and fond of reading. He runs from his past, refusing to acknowledge the trauma he suffered, but comes to be someone everyone else can rely upon and see as a figure of leadership. Ash is notably not a fan of anything regarding the occult.

Ash, was born as Johan (ヨハン) in S.1189, in Hamel, Erebonia, to Jan and Emilia.[4] Johan was the youngest of the four children that lived in Hamel, the others being Leonhardt, Karin and Joshua Astray. He was too young to play with them. Joshua did look forward to him growing up, so they would be able to play together, considering him to be a little brother, albeit a crybaby. Johan was particularly fond his mother's bread pudding.[5]

Johan lost both his parents at the age of 3 when jaeger drop-outs raided Hamel on 23 April S.1192. During their escape, Karin and Joshua found the corpses of Jan and Emilia and assumed Johan had also been killed.[5] Johan was somehow able to escape, running away barefooted and crying along the mountain path. When he reached the South Sutherland Highway, he ran into Migel. Migel had come to Parm to meet with a peddler and went out on the highway for a smoke. Hearing the gunshots, he immediately went back into town and decided to take Johan with him back to Raquel. Migel did not know what to do with the boy who had been unable to mutter a word.[6]

After a few days passed, soldiers started to snoop around and Migel decided he had to get rid of Johan for both Erebonia's and Johan's sake. He gave him some mira and took him to Ellen, an attractive hostess of the place he frequently visited in an attempt to arouse her pity. Without asking questions, she took Johan in.[6] Since the tragedy, he suffered from an ache in his left eye and constantly hears a voice telling him to "kill the vile one", symptoms later ascribed to the curse of the Great One.

On her deathbed, his Ellen told him that she was happy to have met him and thankful to Migel for introducing them. At this point, Johan had already settled on a new name, Ash Carbide, to leave his past behind him.

Ash grew up as a delinquent youth. During the Erebonian Civil War, he formed a youth group known as Fafnir to fight off brigands that attacked Raquel, almost killing them but ultimately driving them off. Even the Bracer Guild and Imperial Army of Erebonia caught wind of his brave efforts. He rejected all their invitations, however, and decided to enroll at Thors Branch Campus following the advice of someone who is familiar with his past. The person who did so was Lechter Arundel, who informed him that signing up for branch academy would be a shortcut to learn about his own past. Ash followed his advice so he could verify everything first-hand.

Ash initially ends up in Class VIII under instructor Randolph Orlando. He signs up for the Literature Club. After the field study in Crossbell, Ash (along with Musse Egret) are transferred to Class VII per Principal Aurelia Le Guin's decision. He fights with a so-called varia axe. The blade of the axe can be extended, making Ash a tricky fighter for his opponents.

On July 18, S.1206, Ash, together with others who participated in the search-and-destroy mission of Hercules a day prior, attend a celebration in the Valflame Palace organised by the imperial family. Guided by the curse, Ash sneaks off and assaults a butler, using his costume as a disguise. Wielding a Republic-made gun he had stolen from a unconscious Hercules member the day before, he infiltrates the imperial parlour. Holding Emperor Eugent Reise Arnor III and Chancellor Giliath Osborne at gunpoint, he wailingly asks who to kill for his curse to subside. Eugent, realizing that Ash is under the curse's influence, claims responsibility for the Hamel Tragedy, causing Ash to shoot him, fulfilling the prophecy foretold in the seventh Black Record. By the time the others arrive, Osborne had restrained him and the Special Guard arrived to take him into custody.

The following day, Chancellor Osborne declares that he interprets the attack of a 'Calvard spy' as a declaration of war from the Republic, announcing a state-wise mobilization. Ash was captured, but amidst the confusion caused by the Great Twilight, he was rescued by Aurelia and the Weissland Army, still unconsciousness in the Panzer Soldats' hands.

Ash eventually regained consciousness and fled on his Hector unit, ridden with guilt for shooting the Emperor and starting a war. His fellow classmate Tatiana was concerned for his well-being and attempted to search for him. Ash contemplated between returning to Raquel or Hamel; he chose the latter. Unexpectedly, Juna, Kurt and Altina were able to find him there following a tip from Margarita Dresden and an encounter with Tatiana, who found his Hector unit.

Ash was surprised to see his classmates and Randy alongside them, but told them to leave him behind. His classmates refuted his argument, with Kurt's words bringing him back to his senses as he realized that the true culprit had to pay for what they did to him. Soon after, Gilbert and several jaegers arrived for a 'talk', which Ash viewed with suspicion. After they were defeated, Zephyr arrived to recruit him, but he refused their request.

Ash also has the chance to confront Migel about his role in his past and come to terms with his past in Hamel when solving a Spiritual World incursion.

Following the conclusion of the Great Twilight, Ash attended the Imperial wedding of Olivert Reise Arnor and Scherazard Harvey.

Ash is present at several events take that place before the main story, including the Branch Campus Academy Festival, the tasting of food for the Imperial wedding, and the Erebonia Martial Arts Tournament. During the academy festival, Ash is once again scouted by Toval to join the Bracer Guild, but he refuses. Ash is roped into completing a series of tasks around the campus, within which each of the characters he meets comments on his growth and reliability as a person. Through the manipulations of Musse, he ends up being elected the Student Council president. Despite protests and threats to drop out, Aurelia refuses to let him drop out on her watch, but states he can pick the remaining members. Ash makes sure to place Musse as the vice-chair, and also recruits Tatiana.

Ash accompanies Rean with the rest of new Class VII to Ymir where Claire had invited them. There they are tested by Matteus Vander and Claire to see if they are strong enough for the important mission of finding the missing Prince. Ash is imprisoned in an electrical barrier, as his unpredictability would otherwise give the team an advantage. They successfully prove themselves after Altina works with Juna to get past Claire and free Ash.

Ash is next seen helping Rean out in Heimdallr, searching for rogue military elements after the hint from the new 'C'. They locate several clues and pursue a group down into the catacombs. They then pursue and unmask 'C' in the Himmel Cemetery.

Ash is present for the final battle against Elysium at Reverse Babel. 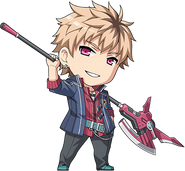 Flashback, memory of the Hamel Tragedy 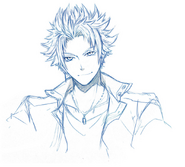 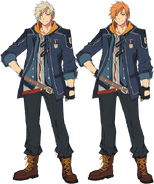 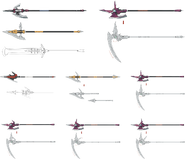 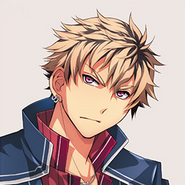 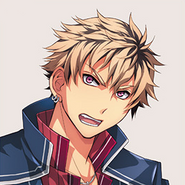 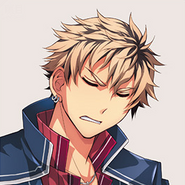 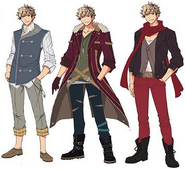 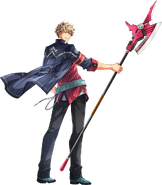 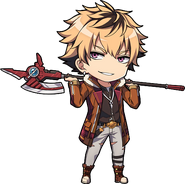 Promotional Screenshot of Ash with Dorothee, Tatiana and Kurt Vander.

Promotional Screenshot of Ash with Rean Schwarzer and Altina Orion. 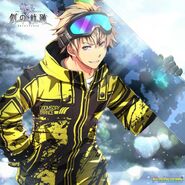