Wind, Space
v · e
Aurelia Le Guin (オーレリア・ルグィン), also known as the Golden Rakshasa (の), is introduced as a countess and head of the Le Guin family and a Noble Alliance general.

Aurelia has long silver hair and purple eyes. She mostly appears in her military uniform which consists of a white jacket and skirt over black tights and thigh-high boots. She wears a purple cape with golden epaulettes and a long violet sash across her chest.

As the principal of Thors Branch Campus, Aurelia wears a blue jacket and red cravat in place of her white one, and a longer white skirt which is split down the side. She has a blue cape with golden epaulettes now, with violet lining on the inside. She has white high-heeled shoes.

Aurelia uses the great sword 'Arcadia' in combat. It has a golden hilt embedded with a green gem, and a wide silver blade with red designs down the side.

Aurelia has a very serious attitude towards both her job and her devotion to her swordsmanship. Considered to be one of the strongest people in Erebonia, she aims to surpass her masters, Zechs Vander and Victor S. Arseid. She enjoys taking any chance to train, either by herself or with others, and loves fighting skilled foes, eager to see what they have in store for her.

In part due to her reputation and strength, Aurelia has an intense air around her while addressing others, which particularly skilled combatants can sense.

Aurelia was born in Erebonia as the daughter of Count Le Guin.

Although born a noble, Aurelia grew up as a passionate and dignified fighter. She enrolled at Thors Military Academy and immediately seized control of the Fencing Club, declaring war on the other clubs. Wallace Bardias, president of the Riding Club at the time, challenged her on horseback. The duel ended in a draw, and the two have maintained a professional relationship ever since.

Her father, serving as the commander of the Lamare Provincial Army, led the chivalry into the the Hundred Days War but was wounded in battle. After the war, the academy gave her special permission to graduate in a single year to succeed her father. After graduation, she joined the provincial army as its new commanding officer.[2]

Aurelia is the only known practitioner of both the Vander school and Arseid school of swordsmanship. She joined the Arseid school in approximately S.1195, around the age of 25, and mastered the school a year later. Determined to become the strongest warrior in Erebonia, she aims to surpass her previous masters, Zechs and Victor respectively.

Aurelia is introduced as in charge of maintaining the Noble Alliance's control in the western half of Erebonia during the civil war. She first shows up in Legram to meet with Laura S. Arseid in her father's stead. On the final day of the war, she is tasked with stopping the advance of the Imperial Army. Although piloting her Spiegel, it gave her a first shot of facing off against one of her former masters: Zechs Vander and his 3rd Armored Division.

Despite her efforts, the Noble Alliance loses to the reformist faction and pledged full collaboration with Chancellor Giliath Osborne. Aurelia complies with the ceasefire. Together with Wallace and 50,000 of their soldiers, they are confined to Juno Naval Fortress during negotiations with the imperial government. The meritorious service of infiltrating and occupying North Ambria would be a substantial compromise in the ongoing negotiations of the uncertain future of the Provincial Armies. It is agreed upon with the imperial government that the Noble Alliance abdicates the naval fortress. Aurelia and Wallace spend the next two months preparing an invasion of North Ambria, together with the Intelligence Division and Railway Military Police.

Sometime after the civil war concluded, Aurelia was approached by Mildine Juzalith de Cayenne of both the Northern War and the Erebonian government's proposal. This in turn convinced her to support Mildine instead of the greed-driven Wilhelm Ballad, who sought to become the new Duke Cayenne after Croire's arrest.

Despite assuming office as principal, Aurelia refuses to compromise her ambitions to become the strongest of the empire. In June S.1206, she joins her students in taking back Juno Naval Fortress from the Ouroboros and the remnants of the Northern Jaegers. The invasion concludes with a battle between Aurelia and Arianrhod. Arianrhod praises Aurelia that she has surpassed what she once was and that she definitely ranks among the strongest of those still human. A couple of weeks later, she challenges her former master Victor to a duel. Once again, she is victorious.

During the outbreak of the Great Twilight, she boards her Spiegel and acts independently from the rest of Thors Branch Campus. She takes up a position in the Weissland Army as a commanding general, teaming up with Wallace and Vita Clotilde. She also rescues Ash Carbide from his confinement and takes back the confiscated Pantagruel.

Now the commanding general of the Weissland Army, Aurelia takes charge from the bridge of the Pantagruel. Her forces are much more competent, but upon amusing from Vita Clotilde, she states that if she had these forces in the October war, the result would still have been the same, just a year or so longer. She escorts Musse to her rendezvous with Class VII, but is pinned in place by the threat of a sniper. After Musse rejoins her classmates, she leaves command of the Army to Aurelia.

Aurelia is part of the forces brought along to help retrieve Class VII from the Black Workshop. She is next seen inviting everyone on board the Pantagruel for a large multi-agency meeting to discuss Operation: Mille Mirage. She has a chance to talk with Elie MacDowell where they discover they share a distant relation. After the plan is shared following dinner, the Glorious attacks and Aurelia moves to the bridge to command. They soon find themselves sin a worst case scenario and prepare to obtain mutual destruction by destroying the Glorious by ramming it. Aurelia says she will cut down anyone who tries to stop her from doing this, but the timely arrival of the Courageous II prevents this scenario.

Aurelia is invited to help set up the conditions for activating the Spectral Moon Mirror by acting as a trail to incite conflict. She is defeated and bids them continue to the final challenge. At the Overture in Mishelam, Aurelia is spotted talking with Mary Altheim and Wallace about Mary's talents and relationship with Makarov. Rean invites her to participate in the drinking challenge, which she does and achieves joint-victory with Sharon and Edel. She and Wallace later have a sparring match.

Aurelia leads one of the teams to attack a fake salt pillar on the first day of the war, intending to take command when the war reaches its climax. She then participates in the final battle against Ishmelga-Loge. Aurelia attends the Imperial wedding.

Aurelia intends to stay on as the Branch campus principal, At their first academy festival, she makes a speech and announces the winners of the student council elections. She challenges Ash when he threatens to leave instead of taking the position, stating she would never allow such weak conviction. Aurelia is present at the Erebonian Martial arts tournament, teaming up with Aurier Vander, however they are defeated by Rean and Duvalie's team.

On another occasion, she remains interested in Mary's love life and the affairs of Wallace who has been brought before Mary as a prospective marriage. She and Wallace prepared a plan to prove Makarov's resolve, pressuring him into completing his project, which he does so. Aurelia, despite having seemingly supported Wallace's suitability for the marriage, is satisfied. Aurelia and Wallace decide to challenge each other as they reminisce about their days at Thors.

Aurelia comes to the aid of Rean's party in Nord at the bidding of Musse who requested her, saving the Nomadic Settlement from automated tanks. She helps them scale the watchtower and face the Simulacrum of Arios MacLaine at the rooftop. When storming the Courageous II, Aurelia helps escort Scherazard Harvey to a safer location, but later returns alongside Mueller Vander in Soldats to help fend off the automated tanks and help the Courageous II to escape. She later helps stave off war by taking on automated Calvardian tanks, and witnesses the mysterious white Divine Knight that appears.

Aurelia participates in the final battle against Elysium when she is teleported in along with four of Erebonia's strongest warriors to deflect a blast from Reverse Babel's Keraunos weapon, after their swords are enchanted by Roselia and Vita. 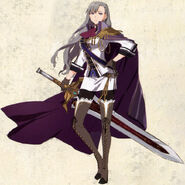 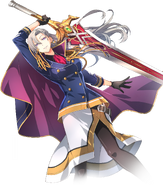 In "2nd Branch of Thors" 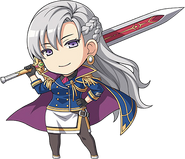 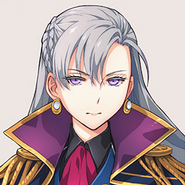 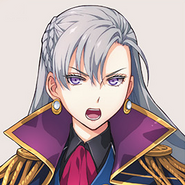 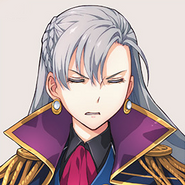 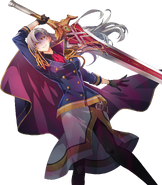