Red
v · e
Black Alberich (黒のアルベリヒ), also known as Alberich of the Black Demise, is the chief of the Gnomes.

Alberich is a tall man with silver hair and red eyes. He wears a black long coat with suit lapels over a number of grey and black shirts, sweaters and an open belt. He wears grey trousers, white gloves and black shoes. As Franz Reinford, his hair reverts back to its natural light blue and the color scheme of his clothing changes, the coat and shirt are now white, and the sweater blue.

Alberich is a dominant personality that takes over the superior descendants of the Gnomes. As such, his personality differs greatly from the original loving and compassionate Franz. Prior to being brainwashed by Ishmelga, Franz was known as a kind and caring father and husband to his family.

As Black Alberich, however, he is a cold-blooded and uncaring man who is willing go to any lengths to achieve his goals, including unquestionable ones. This is shown when he revealed himself to be alive and claimed that he married the Reinford family just to obtain their technology and knowledge as part of his plan to reform the Great One.

Alberich is utterly devoted to his master, Ishmelga and seeks a world where technology can supplant the Septian Church as a seat of power. He cares little for life and his own compatriots, casting them aside easily. He gets enraged easily when his plans are threatened.

Black Alberich is the leader of the Black Workshop, part of the Thirteen Factories and the modern incarnation of the Gnomes, the kin of Earth and the Lost Zem. His goal is to reform the Great One once again, in accordance with the wishes of his master, Ishmelga. 'Alberich' himself is an inherited personality, moving from the bodies of the most prominent gnomes throughout the centuries, making them into immortals and taking over their personalities.

One previous version of Alberich (his last incarnation before the one in the present) was lured to the White Shrine by Isola Millstein who had discovered the secret of the Gnomes and wanted to end him in order to make the world safer. This early version used Zoa Balor and engaged in a fight with Isola, ending with their mutual destruction. Due to Alberich's nature however, he survived and passed onto Franz Reinford.

Franz Reinford (フランツ・ラインフォルト), was a Reinford Group engineer and husband of Irina, as well as a descendant of the Gnomes. Franz Reinford (née Lughman, ルーグマン) became the first discipline of G. Schmidt at the Roer Institute of Technology (RIT). He married Irina Reinford and fathered Alisa. In S.1196, Franz submits a pocket watch alongside plans for all Panzer Soldats as his graduation project at the RIT.[Note 1] At this point, Ishmelga had already interrupted Franz's memories and started controlling him. Alberich fully manifested when Enforcer Kreuger visited him to gather materials requested by Anguis F. Novartis. The battle that followed ended with an explosion, which wounded Kreuger and was believed to have killed Franz.[3][4][Note 2] Afterwards, he revived as an Immortal, and Kreuger became Sharon Kreuger of the Reinford Group under the condition of serving until Franz returns (in reality meaning for the rest of her life as he was believed to be dead).

He serves Giliath Osborne in order to fulfill the Great Twilight and Rivalry of the Seven, for which he has been making preparations for centuries. Alberich was the one who orchestrated the legendary duel between Western Zemuria's two strongest Jaegers; Rutger Claussell of Zephyr and Baldur Orlando of Red Constellation, in S.1203. Both of them had been selected as potential Awakeners for Zector, one of the seven Divine Knights. They died, but Alberich decided to revive Rutger. He approached Xeno and Leonidas, Rutger's most powerful henchmen, and had them work with the Noble Alliance as mercenaries in exchange for Rutger's revival. Later on, Rutger was indeed revived as an Immortal Awakener of Zector.

Alberich is introduced in the series under the guise of Professor Lughman (ルーグマン教授). In order to check up on Altina Orion, he reached out to Class VII in Crossbell and Ordis and guided the group to investigate the Catacombs underneath Heimdallr. In secret, Alberich was observing Class VII and Altina through the use of Zoa Balor in its orb form, which appeared both at the Stargazer's Tower and the exercise involving the Goliath Noa which went out of control with an unconscious Altina.

Angelica, who had been suspicious of Azure Siegfried due to his resemblance to Crow, suspected that George was hiding something. She confronted him at Himmel Cemetery and demanded to know the truth, just as Alberich arrived. Alberich ordered George to kill her, but George intentionally missed her vital organs. George explained to Alberich that he wanted to control her like they did with Crow; Alberich did not mind and allowed him to do whatever he wanted.

When the Gral of Erebos appeared as the place to usher in the Great Twilight, he summoned Altina in order to have her sublimate into the Sword of the End, a weapon capable of destroying Holy Beasts. Altina and her predecessors in the Oz series were developed specifically for this purpose. With Osborne's consent, he stopped the Courageous's interruption of ritual by having Georg detonate the bombs aboard the Courageous. What remained for him was to witness Rean Schwarzer ushering in the Great Twilight.

With the Great Twilight activated, Alberich returned to the Gnomes' headquarters alongside Osborne, who had captured Rean. Class VII infiltrated the Black Workshop in order to free Rean. When Alisa calls him out by his original name, he replied that he - as Alberich, is not her father.

Alberich deployed a Gargantua-class battleship in the area near the Draco Shrine, sealing it off with a barrier to prevent the Second Rivalry from starting prematurely, entrusting George and Sharon to protect it from Class VII. After the two failed to hold them off, Alberich expressed disappointment in both of them, before releasing his "graduation" project, a Leviathan-type Zauber Soldat. Despite its efforts, the Leviathan was unable to defeat Class VII and went haywire, attempting to attack Irena and Schmidt, who were observers. Sharon and George stopped the Leviathan, with the latter's efforts causing it to destroy the shield generator. Alberich was infuriated with George's "betrayal" and dismissed him from the Gnomes.

Following this incident, Alberich had the Black Workshop emptied of all vital documents. He later deployed another Leviathan unit to help McBurn in Crossbell after anticipating that Victor would be incapacitated in some way, but its presence simply infuriated the Enforcer.

As Rean contemplates suicide to stop Ishmelga, Franz appears and reminded him to use what he learned from the Holy Beasts, sparing him from such a fate. Following a brutal battle, Rean kills Ishmelga, ending its curse. With the conclusion of the Great Twilight, Crow and Millium soon begin to fade away, but Franz appears once more and with the help of the Divine Knights, uses the power of the Sept-Terrion to revive the two. Franz himself is unable to be revived due to the time he spent as Alberich. Before he disappears, he tells Alisa he is proud of her, asks Sharon to continue serving his family and tells Rean to return to the workshop with the sword. Once all of the political fallout from the Great War is dealt with, the group heads to the workshop, where they discover Franz had built a spare body for Millium.

Alisa and the others investigate a vestige of the Black workshop that had been hidden until George discovered it. within the depths of its laboratories, they discover a recording of a non-Alberich Franz who wishes them farewell and gives his last goodbyes advice and messages. He had in secret prepared a backup of Airgetlam for Millium to use.

Alberich's orb that allows him to observe events

Alberich with Giliath Osborne in Trails of Cold Steel III

Alberich with Giliath Osborne in Trails of Cold Steel III 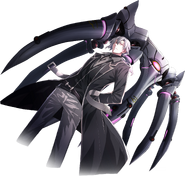