Orbal Staff
v · e
Bleublanc (ブルブラン), also known as the Phantom Thief B (; ), is introduced as Enforcer No. X in Ouroboros.

Bleublanc appears to be a somewhat moderately aged man with blue hair and yellow eyes. As an Enforcer, he usually wears a metal mask that covers his eyes, elongated with two sets of feathers pointed outwards at the ends to look like ears. He wears a blue shirt, with a white, unbuttoned tuxedo on top of it.

In battle, he uses an orbal staff.

Bleublanc has a flamboyant and theatrical personality. He is very vain about his looks and narcissistic and egotistical to a point. A master thief, Bleublanc originally stole to survive, but now does so for the thrill. His thefts are usually not ill-intended, but instead a way to challenge people through mysterious cryptics he leaves behind.

He is entranced by Princess Klaudia von Auslese's beauty and admits that he is in love with her.

He has vain ideas about beauty, attributing it with pride. This puts him at odds with Olivert Reise Arnor, who values beauty as a byproduct of love, and he considers Olivert to be his rival. Despite their differences, he ultimately respects Olivert and is willing to lend a hand when needed to see how he prevails in the face of adversity.

Bleublanc is a notorious phantom thief who operates across Zemuria. His public activities have even led to the blooming of a small fanbase.

Bleublanc was born to a poor family in the temperate south.[1] He became used to stealing in order to make ends meet from a young age. According one of his friends during childhood he was never once caught for such thefts.

At one point Bleublanc converted from a common thief to a con artist, which is believed to have stemmed from falling in love with a noblewoman of much higher social standing than he. The rule of the aristocracy was absolute in the country he called home, and blessed romances between those of different classes unthinkable. With that in mind, he resolved to create a false identity in order to make his dream possible. He was as handsome as he was capable, and he was exceptionally proud in nature as well. Following his first rousing success, he came to do the same on a myriad of other occasions, indulging in one forbidden affair after another.

In c. S.1193 he was arrested on suspicion of identity fraud, but he performed a miraculous escape from prison. He resurfaced in S.1202 as an Enforcer for Ouroboros.

Bleublanc was already in Liberl prior to the start of the Gospel Plan's second phase, and had noticed Joshua. Not one to resist a chance for a chance to play with him, Bleublanc disguised himself as Dario, a manservant in the employ of Morris Dalmore. He stole the ancestral candelabra of House Dalmore and left clues as to its whereabouts for the pair of bracers to locate and solve.

Along with Walter, Luciola, Renne and Loewe, Bleublanc was one of the five Enforcers who assisted Third Anguis Georg Weissmann with the Society's Gospel Plan in 1202. As part of the testing phase, he used a photographic projection device to send ghostly images of himself around the Ruan region, disturbing the peace. When confronted below the Old Schoolhouse of Jenis Royal Academy, he introduces himself and states his desire to steal the pride of Klaudia von Auslese. He meets his match in the fellow seeker of beauty Olivier however and the two become 'eternal rivals'. Bleublanc sets an ancient archaism- the Stormbringer upon them, but after its defeat, he pins them in place with magical knives. After Dorothy Hyatt's camera flash dispels the shadow stitching, he withdraws. from this point onward, Bleublanc would continue to steal various objects for Estelle's group to find clues for and retrieve.

Bleublanc is present on board the Glorious when Estelle is taken captive, but leaves with most of the other enforcers. He is encountered and fought on the top of Esmelas Tower, where he is joined by two balancing clown archaisms. He later witnesses the marvel of the Liber Ark returning to reality. During the confrontation with him aboard the Liber Ark, Bleublanc comments that Enforcers are allowed to do what they want and cannot be obligated to obey others in the Society. After saying this, he states that his motivation for participating is to steal the beauty of Liberl by depriving it of hope.

The plan results in the successful acquisition of the Aureole but results in Georg and Loewe's deaths, along with Luciola going in hiatus and Renne eventually leaving. He did not have any ill will towards the latter two and understood why Loewe had partaken in the plan.

From the deck of the Glorious, Bleublanc watches the demise of the Liber Ark, and takes in the sight. A copy of him is fought alongside Walter and Luciola in the Black Ark on the Sixth Plane, where they chide Kevin Graham for hiding his true strength and motivations. He is defeated whoever and wishes the party well before fading.

The backstory and theories surrounding Bleublanc are explored in the 11th Memory door, Phantom Thief B Report. The X theory is suggested to be his true backstory after he leaves a note stating the truth is already within the report writer's grasp, and his number (X) reveals all.

Bleublanc first appeared in the Cold Steel series as Baron Bleublanc. He first appeared during Group A's field study in Bareahard. The group did not suspect him of anything, but he then ran into Toval, who appeared to be suspicious of him.

Along with McBurn (Enforcer No. I), Duvalie of the Stahlritter, and Vita Clotilde (the 2nd Anguis), Bleublanc was one of the members of the Society dispatched to fight alongside the Noble Alliance during the October War of 1202 in Erebonia. As in Liberl, Bleublanc's motivation was his search for beauty. His organization's involvement was primarily motivated by the Phantasmal Blaze Plan.

He first crossed paths with Class VII atop a watchtower in Nord Highlands alongside Altina Orion, wherein he restrained the students and was about to raze the highlands to the ground. Just like when he held Olivert and co. captive years prior in Liberl using the same technique, he was interrupted again - this time, by fellow Enforcer Sharon Kreuger, who saved the party and the highlands. Bleublanc finally crossed paths with his rival Prince Olivert once again aboard the Pantagruel.

In the final hours of the war, after squaring off against Class VII alongside Duvalie, he and Duvalie battled Olivert and Toval Randonneur in the Infernal Castle.

Bleublanc did not participate in the Society's efforts to reclaim the stolen Phantasmal Blaze Plan from Giliath Osborne. He initially appeared in the guise of an NPC named "Aleister" in Trails of Cold Steel III.

In Trails of Cold Steel IV, Aleister's true identity is revealed. It is also revealed that after the explosion of the Courageous at the end of the previous game, Bleublanc helped save Olivert, Toval and the other Courageous members by deploying a barrier to protect them from the explosion. He was not able to rescue Victor S. Arseid, who later turned up to fight under control of the Erebonian Curse. Bleublanc first appeared when he, alongside a number of people including the Special Support Section, Estelle, Joshua and Renne, helped protect Class VII from the assaults of Rufus Albarea in his newly acquired Divine Knight. Bleublanc was close to Vita, which is why he joined her side and turned against the society when she chose to do so.

He later made a grander reappearance when the Courageous II swooped in to protect the party aboard the Pantagruel, showing that he was now cooperating with his worthy rival, Prince Olivert, who finally revealed himself (along with Toval) to be alive. Later, he helped pilot the ship that the Stahlritter and Zephyr members used to reach their Salt Pale.

Like McBurn, Vita and the Stahlritter, Bleublanc was not stated to have returned to the society at the end of the game.

Upon hearing of Olivert's marriage to Scherazard, Bleublanc decided to congratulate him in his own way. He stole Scherazard's wedding dress and led the two on a wild chase across Heimdallr, eventually culminating at the Karel Imperial Villa where the pair recovered the dress and the tiara that the Arnor family had lost long ago. He had also contacted Luciola, who wrote a message for Scherazard. 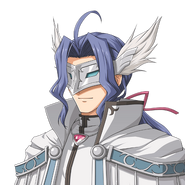 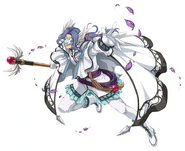 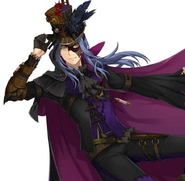