Bridget is a young woman with long golden blonde hair and green eyes. She always has a white hairband. As a student at Thors Military Academy, she wore the nobles' uniform of white, purple and gold, with a blazer, black tights, skirt, lavender shirt and purple tie. Following graduation, Bridget wears a lime green collar shirt with black ribbon tie, blue-black under bust corset and a dark blue skirt with a white layer underneath. She wears black heeled shoes.

Bridget is a very sensible individual, who does not share the sense of superiority that most other nobles possess. She tries to be extremely helpful to others, especially Alan, but expresses her annoyance when she is rebuffed for no reason. Nevertheless she is still extremely concerned for his well-being and their friendship.

Bridget was born as the daughter of a baron, in the same town as Alan. Her father, however, was not one to put much importance on social standing, so he let her attend Sunday School on her own since it was close enough to home. She went to the same Sunday School as Alan until she had to move away.

They would not be able to see each other until they both enrolled at Thors Military Academy in March S.1204. Bridget was assigned to Class II for nobles. As a piano player, she signed up for the Music Club.

Bridget notices that Alan starts pushing her away and taking out his aggression on her. She enlists the help of the Student Council,[Quest 1] picked up by Rean Schwarzer who helps get to the heart of the issue- Alan's own insecurities.

After the outbreak of the Erebonian Civil War, Bridget escaped from Trista with Alan but lost contact with her along the way. She ended up in Bareahard, where she started working as a home tutor and housekeeper in the house of Baron Hancock, a friend of her father.

When she is invited by Class VII to join the Courageous, she turns down their offer until she knows Alan is safe and sound on board and considers herself a liability regardless. She played the piano during the concert Elliot Craig organised to offer relief to the people of Celdic after it was ravaged by the Kreuzen Provincial Army.

Bridget is first seen at Heimdallr where she sees Alan in his Drakkhen Panzer Soldat during a military parade. Sometime after the parade, she began noticing that Alan was acting odd, but was unable to discern the cause.

After the military parade, she spent some time with him at Mishelam Wonderland, where the two of them were trailed by Class VII, who arrived to look for the Occult Point in the area. Bridget was about to leave when she spotted Class VII. She learned from them that Alan was afflicted with the curse and hoped that he would return to normal soon. While walking around with Alan, she had also spotted Matthew Crawford, who the group was looking for before she departed to catch up with Alan.

She later heard of Alan's intentions to transfer to the Second Armored Division and confronted him at Crossbell, seeing that he was throwing away everything he worked for. She had sent a request earlier to help resolve the dispute, which was answered by Class VII. Bridget stalled Alan while Rean gathered as much alumni as possible. After Alan was defeated by Rean and Patrick T. Hyarms, Bridget slapped Alan to bring him back to his senses. She later thanked her former classmates for bringing him back to normal.

Rean and his party encounter Bridget and Alan in their house in Heimdallr. After the war, some of the noble houses are trying to use the time as an opportunity to rearrange their lands or change the ruling system, and Bridget's family had been appointed as a coordinator. She is helping her father out, but combined with Alan's own military duties, it makes it difficult for the pair to see each other. She is concerned about some of the news Alan is bringing about some elements of the military conducting secret operations behind the scenes. 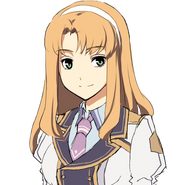