Male
v · e
Butler Klaus (クラウス) is the Arseid Family steward and the acting master for the Arseid School of swordsmanship when Viscount Victor S. Arseid is absent.

Klaus is an elderly man with grey-white hair combed back, violet eyes, and long moustache. He wears a dark grey-purple sleeve suit with silver striped line edges, gold buttons on the wrist collar and on the front of the chest. Klaus wears a white collar shirt underneath, tied with a light pink bow-tie with a gold circle pin in the middle. Over the suit is a blue short cape reaching down to his elbow joints with yellow lining designs and marks, and two buttons for each side with a thread attaching across the open chest spot. He wears white pants, dark grey-purple shoes, and white gloves.

On hand, he wields a silver rapier to aid him in combat.

Klaus is an experienced butler with over his long years of service. He is humble, gentlemanly and patient with others, and he is modest to make light jokes about how his skills aren’t as sharp as they used to be.He is well knowledgable for having lived as long as he has, and seems to be a responsible person in handling tasks for Victor S. Arseid when he is away, including the instruction at the Arseid School. He also shows to have a good assessment of others and their capable combat abilities of what weapon styles they come from, even judging how strong they current are without seeing them fight by deduction. He knows to be calm, cool, and collective when in the presence of those who coming with less than honest intentions but lots of authority.

A steward of the Arseid House, and also serves as acting master of the Arseid school of swordsmanship. He has the proficiency in the art of concealment. While holding quite a few talents being a butler, a steward, and acting master for a school of swordsmanship, he seems capable of handling the shoulders of so much responsibility which shows he’s patient to support. He’s shown being good at deducing how skilled others show to be, even those that he’s never seen how they fight. Even going so far as to sense if his opponent was holding back due to reason; much like when he faced Rean. His honorary title as acting master of the Arseid School of Swordsmanship is no joke, as his stance leaves no openings. Laura even admits that she’s been defeated by Klaus on more occasions then she like to count. Rean even stated he could feel Klaus’ power even when he hasn’t moved yet.

Klaus accompanies Laura to Trista on her first day of school at Thors.[1]

Klaus welcomes Class VII in front of Legram's train station when they arrive at the town for their field study, representing the Viscount who was away. He gives them a brief tour of the town and escorts them to the Arseid mansion, where they'd spend their next days. In one of their field study assignments, Klaus invited Class VII to a friendly bout against the students of the Arseid school so they could exchange knowledge and their experiences, entering the fight later on as well.[2]

After being visited by Duke Cayenne, the Viscount leaves Legram and asks Klaus to send letters to nobles who would wish to remain neutral in the conflict between the Noble Alliance and the Reformist Faction, to let them know they are not alone. When Karno and Julian disappear, Laura has him prepare a boat so Class VII can reach Lohengrin Castle and rescue them.[3]

Viscount Arseid and Klaus visit Thors during the academy festival, and attend to Class VII's concert.[4]

When Rean and the others visit Legram to find Laura and Emma, Klaus tells them they're at Lohengrin Castle, and again readies a boat for them to cross Lake Ebel. After Laura goes to Bareahard with Class VII, she leaves Legram in Klaus' care during the remaining of the October War.[5]

In December 27th, Miles and Klaus send a request for help to the Courageous. The fog around the town started getting thicker and thicker, and on the previous night they heard the sound of a bell ringing coming from Lohengrin Castle. Because Class VII had already explored the castle in the past, they ask the students to find a solution to the problem.[6] 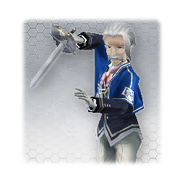 Retrieved from "https://kiseki.fandom.com/wiki/Butler_Klaus?oldid=66135"
Community content is available under CC-BY-SA unless otherwise noted.