Male
v · e
C (《》) is one of the three protagonists in Trails into Reverie.

C is introduced as a black-clad knight hiding his true identity through the use of a full-face black mask and accompanying black hood. C dresses in a dark black overcoat with gold cauldrons and numerous ornamental belts and straps. The lining of his coat is violet, and he also wears white gloves, leggings and boots that match his jacket. A white cravat scarf is tied around his neck and he uses a doubled-edged broadsword in combat.

C is pragmatic and quick thinking, making use of everything that arrives at his disposal and not hesitant about using dishonourable tactics should they prove to his advantage. Despite having had difficulties in the past, he is resolved to pursue and achieve his goal.

C is an excellent swordsman, whose true identity remains shrouded in mystery as he single-handedly investigates the Imperial Defense Force commanded by Rufus Albarea during his time as governor-general in Crossbell. C travels alongside Lapis Rosenberg, Swin Abel and Nadia Rayne.

Not long after beginning his mission, Swin Abel and Nadia Rayne delivered a black case to C and together they open it to reveal Lapis Rosenberg. He convinced Lapis to travel with him to help restore her memories as he felt she was the key to resolving the case. Swin and Nadia were hired as mercenaries to help him in his quest. C sends a message out suggesting he was behind the abduction of the Prince and his newly-wedded wife and directing rean's party to heimdallr to root out the 'sludge' that would turn out to be surreptitious elements of the Erebonian army.

While there, C's party is tracked down to the Mater park, where they briefly escape into the catacombs. They emerge into the Himmel Cemetery where Crow Armbrust, the Original C is waiting for them. After a brief skirmish, they surround crow, but he was only ever intending to buy time as reinforcements arrive and quickly outnumber the party. After dodging several blows, Jusis Albarea lands a hit on the mask, smashing it. C's mask was broken and his identity revealed. He insisted that he was not the Supreme Leader and he was investigating the imposter himself before fleeing on Jingo's airship, grabbing Lapis in tow.

Hello there, beautiful. May I have a moment of your time?
Please be aware spoilers may be present in the following section. Hit [Show] on the right if the show must go on. Adios, amigos!

C doesn't physically appear here, but he's mentioned various times, including during the last battle between Van and Melchior.

A promotional picture showed him, appearing with the new name RA, said to be "under special surveillance from the CID".

Falcom got their ideas for Trails into Reverie's scenario from their younger staff members, with C born straight from their proposal. ‘The Hermit’ basically refers to C, acting as the leader of his group.[1] 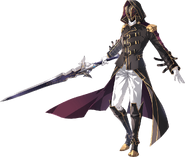 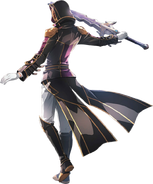 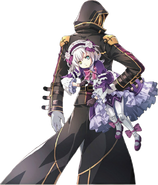 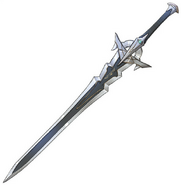