Campanella takes on the appearance of a young boy, but he hasn't aged in ten years. He is not a homunculus, nor an Immortal. His age and sex are not known, but he is referred to as male by the other characters.

Campanella has bright green hair with two strands sticking up like antennae . Although only one eye is visible under his hair, it is red and there is a red tribal tattoo like marking underneath. Campanella wears a pink suit over a lavender collar shirt, with a yellow ribbon tie and black shoes.

Campanella is a mysterious individual whose true self can't be seen. Due to the ambiguous nature of his gender, he is a hard individual to classify.

Although he appears to have an optimistic personality, Campanella is both cold and sadistic, taking enjoyment in taunting and threatening both enemies and allies alike - in particular, he enjoys messing with Gilbert Stein the most. He rarely gets upset.

Campanella is not completely irredeemable however, being able to garner genuine respect for his enemies and understanding their feelings. He also apologizes on the Grandmaster's behalf in the event of accidents or specific incidents, promising not to have the society's presence in said area.

Despite his powers as an Enforcer, Campanella is rather laid-back, letting others do the work for him in most cases, as he acts as an "observer" - simply seeing what will happen and letting his enemies escape upon being satisfied.

Serving as Enforcer No. 0 of Ouroboros, Campanella holds a special position among his fellow Enforcers - he reports directly to the Grandmaster about the progress of the plans enacted, and he doesn't appear to share the same freedoms as them.

Although Campanella first appeared on screen in Trails in the Sky SC, he had already made preparations for Georg Weissmann's Gospel Plan by the time Trails in the Sky FC started. Campanella had been put in charge of the Jaeger Corps' attacks on the Bracer Guilds in Erebonia with the intent of removing the Gospel Plan's primary hindrance, Cassius Bright, from Liberlian territory.

Campanella is first seen exiting an airship, noting Georg Weissmann's excellent taste in hideouts and greets Leonhardt when he appears. Campanella states that he handled the Bracer Guild attacks in Erebonia and that Cassius Bright was magnificent as he countered everything that Campanella threw at him, so much so that he broke the jaeger group 'Jester'. Weissman arrives and thanks Campanella who responds by mentioning how fun Weissmann's new plan is.

Campanella is later seen as the mysterious figure watching Scherazard Harvey or Agate Crosner fighting with Anelace Elfead against archaisms. After the battle is over, Campanella starts clapping and congratulates the pair for their performance. He introduces himself as Enforcer No. 0: Campanella the Fool. Campanella declares that he is an observer for this little soiree and that he barely knows the details of the plan, so they should probably ask someone else. Suddenly, Campanella snaps his fingers and makes the three assailants stand up again and explode. He leaves by teleporting away.

After the mist demon incident in Rolent, Campanella picks up Luciola with Walter and they talk about the plan. Campanella leaves to get permission for the Glorious to be used, where he is next seen in the Sanctuary greeting Estelle Bright with the other enforcers. When the Glorious was sabotaged by Joshua and he attempted to escape with Estelle, Campanella intercepted the two and deployed a Pale Apache archaism. He never intended to get in their way, stating his role as an observer, and just wanted to make it more entertaining.

Estelle and her friends soon defeated Weissmann despite his harnessing of the Aureole. The Aureole disappeared soon after, prompting Weissmann to flee as he staggered throughout the collapsing Axis Pillar, wondering if the Grandmaster had tested him. Father Kevin intercepted Weissmann and killed him with a stake crafted from the Salt Pale. With the job done, Kevin commented on how lucky Joshua would be, as he could escape his dark past. Campanella then called out if Kevin was actually jealous before teleporting in. After the two exchanged introductions, Campanella shattered the salinified statue of Weissman and took his staff before teleporting back to the Glorious.

Returning to the Glorious, Campanella knew that he had to report the results of the Gospel Plan to the Grandmaster and the Anguis. Upon arriving to the sanctuary, he encountered two guards who did not let him pass as Weissmann had stated so. Campanella indirectly revealed Weissmann's death to the guards and threatened the same onto them if they didn't leave.

Inside the sanctuary, Campanella contacted his superiors, all of whom were waiting for him. He informed them of Weissmann and Loewe's deaths, before offering the Aureole to the Grandmaster, who proclaimed the beginning of the Phantasmal Blaze Plan. Returning to the sanctuary, Campanella expected the Phantasmal Blaze Plan to dwarf the Gospel Plan in both quality and scale, eagerly awaiting the results. He then turned around and asked the "mysterious stranger" to stop peeking on him.

Campanella is seen preparing the Phantasmal Blaze Plan with Doctor F. Novartis and Arianrhod in Crossbell. During preparations, Campanella often hindered the Special Support Section by risking their lives in a game of "Pomtto!" or fighting them in order to defend the Moon Temple's bell. During the battle, Campanella summons a "Fake Salt Pale" as his S-Craft.

After finishing his work in Crossbell, Campanella headed towards Erebonia for the second phase of the Phantasmal Blaze Plan.

In S.1206, Campanella himself appears in Erebonia on behalf of the Grandmaster. In order to take the Phantasmal Blaze Plan back, he throws the Empire into chaos with help from Enforcer XVII Shirley Orlando and the Thirteen Factories. He has also requested the help of a former colleague who stopped working for Ouroboros a while ago, presumably referring to Sharon Kreuger.

Campanella heads up the society's operations in Crossbell, after ditching his disguise as railway worker. He tests Rean and new Class VII by trapping them in a forcefield and summoning the cryptid Mordreian. Emma comes to their aid however and Campanella withdraws. He is next seen with McBurn on top of the Orchis Tower announcing their presence, and is later tracked down and fought on the roof of the Stargazer's Tower where they test the Aion Type-β II before withdrawing from Crossbell for now.

Campanella attends the meeting of Ouroboros in the Erebonia region on Bryonia Island, and engages some of the forces deployed by Wallace Bardias in the ongoing barrage by the abducted railway cannons. He also plays the opening note in brining about the Great Twilight by ringing one of Crossbell's artifact bells and summoning the Gral of Erebos. he helps guard the exterior of the Gral, and comments that their side is fighting for the end of the world when the Nameless Holy Beast is slain.

Campanella is first seen in Crossbell City alongside Lechter, observing New Class VII running around the city. He later departed to the marshlands with Lechter and Sharon, where he has his first meeting with them. Juna immediately calls him out as he appears to simply cause chaos for no reason. Campanella is shocked by the accusation, appearing to show some sympathy, but states that he does not share the freedom of the other Enforcers and prepared to fight, wondering if she could back up her words with actions. Following a small scuffle, he comments on how New Class VII had gotten stronger and wonders what is causing them to run all over the place.

He later participated on the attack on the Pantagruel.

In the Eryn Village sidequest, Campanella was doing some errands but had been aware of F. Novartis ordering Gilbert to test out some Field Negation Devices on the village. Novartis had ordered Gilbert to observe the results, but Gilbert decided to seize the village. His forces were routed by Rean's group, just as Roselia, Vita and Emma arrived after Gilbert was defeated. Before the witches could deal with Gilbert, Campanella teleported in, clearly irritated by Gilbert's incompetence, comparing it to the Jenis Academy incident and began electrocuting him. He only stopped after Gilbert begged that he wouldn't disobey orders anymore. Seeing the three witches, Campanella apologized to them for Gilbert's actions and promised that the society would leave Eryn Village alone, teleporting the device, Gilbert and his ruined G-Apache away.

At the start of the Great War, Campanella was accompanying Mariabell at Tuatha De Danann. Anticipating the arrival of Class VII, the two created a welcome sign outside, where he predicted a 60-40 chance that Rean would defeat Cedric. He and Mariabell were not particularly interested in fighting them, but upon being defeated, commented that McBurn could get the fight he had been looking for. He also explained to Class VII that the society did not care about the result of the Phantasmal Blaze Plan, as they were simply observing what man would do with the Sept-Terrion before teleporting away.

Following the conclusion of the Great War, Campanella was seen talking with the First Anguis and Mariabell about the results of the Phantasmal Blaze Plan.

On the Glorious, Campanella has a brief role where he speaks to Mariabell Crois and F. Novartis about Cedric Reise Arnor's suitability for an enforcer position, stating that he has the requisite darkness but lacks experience. 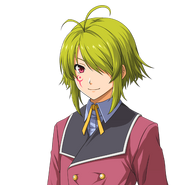 Start of the Gospel Plan (EVO) 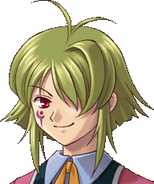 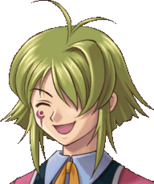 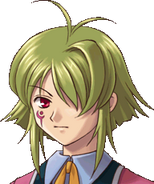 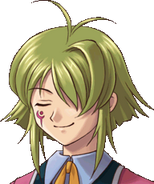 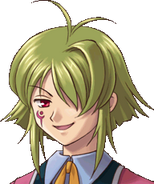 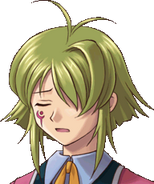 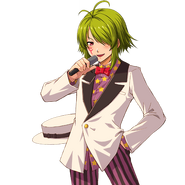 Who Wants to Be a Mirannaire? NORMAL (EVO) 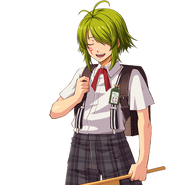 Who Wants to Be a Mirannaire? HARD (EVO) 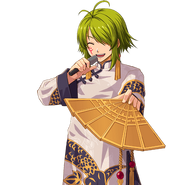 Who Wants to Be a Mirannaire? BRUTAL (EVO) 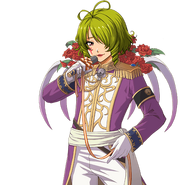 Who Wants to Be a Mirannaire? MANIAC (EVO) 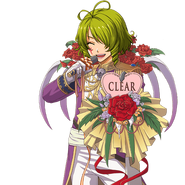 Who Wants to Be a Mirannaire? MANIAC CLEAR (EVO) 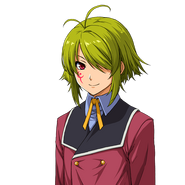 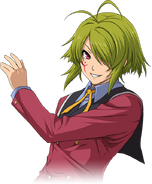 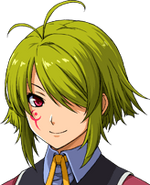 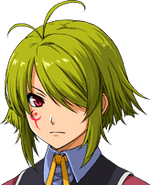 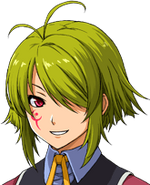 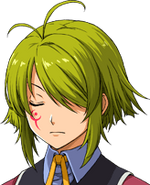 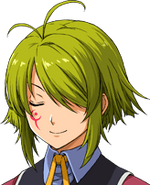 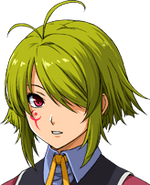 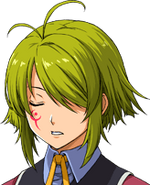 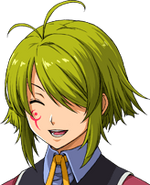 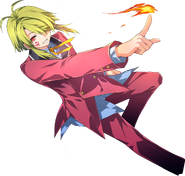 S-Craft from Akatsuki no Kiseki

Xmas S-Craft from Akatsuki no Kiseki 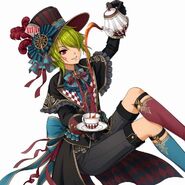 Wonderland S-Craft from Akatsuki no Kiseki