Cao is a tall slender man with bright fuchsia hair and narrow matching eyes. He wears slim red-framed glasses. Cao wears an Eastern style indigo-blue suit with floral embellishments and cord ties over a black high collared shirt and red pin. His trousers open up at the heel and he wears flat slipper-like shoes in violet.

A prominent intellectual, Cao is loyal to the Heiyue Syndicate. Most of his actions generally revolve around ways that would benefit his branch, even relying on authorities to do so. He is cunningly manipulative and changes his branch's affiliation with other parties regularly depending on whatever puts him in the most advantageous position. As such, others consider him to be a slippery, untrustworthy person, but his genuine loyalty to Heiyue means that he generally keeps his word to whoever he helps.

Despite being a skilled combatant, Cao prefers to leave the fighting to his subordinates, but he will partake in a fight if necessary, utilising martial arts. Cao is a skilled practitioner of the Moon Flower style.

Cao was born in S.1179. He has been in the service of the Lu family of Heiyue for many years.

Before Heiyue moved to Crossbell, he is proud of the fact that their organisation 'conquered' the Eastern Quarter, having seemingly driven off the Red Constellation in the process.

Publicly seen as the president of the Heiyue Trading, Ltd. in Crossbell, Cao is actually a manager within the Heiyue syndicate. He came to Crossbell to break Revache's foothold and take over the underside of Crossbell. To accomplish his goals, he contracted the legendary Calvardian assassin Yin.

When he first met the Special Support Section, he surprised them by correctly telling them their names, ensuring he already has his intelligence network in place. In August S.1204, he was contracted by Samuel Rocksmith to protect him during the West Zemuria Trade Conference. Cao and his men apprehended the terrorists of the anti-immigration organization per Rocksmith's request.

During the Red Constellation attack on Crossbell City, the Heiyue branch at the Harbor District was burnt down to the ground. Cao concluded it would be best to team up with the Special Support Section and work toward Crossbell's liberation. After the confusion in the city settled, Cao re-opened the Crossbell branch, which flourished with no rivals in Crossbell's illegal circuits.

When Crossbell was occupied by the Imperial Army, Cao helped Lloyd enter Geofront to claim some classified data before the Imperial government could.

Cao is mentioned as negotiating with the governor, Rufus Albarea to ensure trade can continue with the Empire. After the Great Twilight and listening to the declaration of the National Mobilization Law, Cao re-evaluates his barnch's position and schemes on how to achieve the most beneficial outcome.

Cao Lee eventually returned to Heiyue's Crossbell branch. He was later given a contract by the Crossbell government and given several archaisms to patrol Geofront Block X. He eventually cornered Class VII with the loaned archaisms, but was stopped by Elie and Estelle. Regardless, he had completed his side of the bargain.

He eventually appeared to offer help to Class VII and the SSS after the contract with the government expired, as he was solely interested in keeping Heiyue afloat, which would not be possible with the Great Twilight. He showed them a picture of McBurn and Victor S. Arseid at the top of Orchis Tower, and later had his associates help them set up a performance to distract the guards around the tower.

Cao entered an contract with Rufus Albarea, who simply wished to keep his branch afloat. He appeared to be aware that the Rufus that had come to speak with him was a fake, but continued to maintain his agreement regardless. After the Supreme Leader took over Crossbell, Cao kidnapped KeA Bannings and Ilya Platiere in the aftermath. Aware of Lloyd's recovery, he set up a trap at the Ancient Battlefield. Although the trap failed, he let KeA go for Lloyd entertaining his request.

When the rebels attacked the city, Cao deployed his branch to help the real Rufus, having been in contact with Dieter Crois and Garcia Rossi before their attack began. He claimed that the likely success of the uprising meant that his contract would be useless. After Project BABEL's Keraunos weapon leveled Juno Naval Fortress, Cao was unsurprised by its destruction, simply stating that the weapon was what the enemy had developed in secret.

Cao contacts Van Arkride and serves as the conveyor for the request that Arkride Solutions Office travel to Langport to provide assistance to Heiyue. He outlines the situation in the city regarding Heiyue's role as 'balancers' and the upstart actions of the Almata mafia. His request is for the office to prevent one particular individual, Aaron Wei from causing an escalation that would lead to a massive underground conflict. He bribes Van with fresh dried fruits from Varis to get him to accept the case. Cao himself is sent to Crossbell by Gien Lu to request the assistance of Yin, which he does, returning a day early and helping to prevent Aaron from falling into Gien's plot. It is stated that Cao has had his eyes on the the Solutions office for quite some time. Ashen Lu has a particularly strong crush on him, which many others regard as 'bad taste.'

Cao takes part in a clandestine meeting between various groups in the Dark Light District in Edith, including Zin Vathek of the Bracer Guild, Walter Kron of Ouroboros and an Unknown hooded figure. Cao and Van are roped into a fight between Walter and Zin, with Cao teaming up with Walter. Kilika Rouran, the rest of the Solutions Office and two Gralsritter show up to break up the fight and many parties move on. Cao stays and continues the discussion about Almata, exchanging information.

Cao leads the Lu family's operations in Oración when Almata threaten the city and start their death game. Cao stations agents around the city and involves Yin as well. Van may decide to work together with Heiyue, in which case Yin and Cao will join the party, after first testing their strength. If Heiyue are not selected as allies, they will instead act as opponents. Regardless of which path is chosen, Heiyue will offer to take the defeated individuals or prisoners off the party's hands. Should the Bracer Guild be chosen as Allies, it will be Cao and Rixia who defeat the Doole Family and eliminate them form the game.

If Heiyue is not chosen as an ally, he will be challenged fairly early in the game, although offering to pretend that the two groups never encountered one another. He doesn't particularly mind if they are defeated as their motives do not necessarily involve winning the game, and then lend assistance in any result. Within the city during the game, Cao maintains contact with the republican government through Rene Kincaid and plans to make moves on the city after the event. He also converses with Zin later on.

After the death game and death of Gerard Dantes, Cao takes an active role in dismantling Almata's operations and trade routes. He comes to edith once again and is present in the city for revolution day. Cao attends the party in Bistro Monmarte, having been invited By Aaron as long as he brings Rixia. On revolution Day itself, Cao meets with Gilliam Thorndyke and Yang Cronkite to discuss technology. When Pandemonium envelops the city, Cao lends his assistance to Van and helps the group reach the Dark Light District before he heads off to regroup with Heiyue forces. Cao and Rixia may appear to help destroy the Diabolos pillars and allow the party to enter Genesis Tower.

Cao returns to Langport in the New Year. 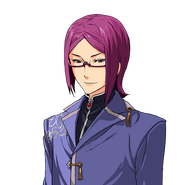 Promotional Screenshot of Cao with Lau.