Kiseki Wiki
Register
Don't have an account?
Sign In
Advertisement
in: Characters, Bracers, Trails in the Sky FC Characters,
and 5 more

Support
v · e
Carna (カルナ) is a Senior Bracer affiliated with the Ruan branch of the Bracer Guild in Liberl.

Carna is a young woman with long black hair and green eyes. he wears her hair is a high ponytail with two strands left to fall in the front of her face over her red headband. She dresses lightly, with a crimson bustier and short brown cape that is belted around her neck, a short crimson skirt with brown armor plates and two black stockings, one reaching her thigh and the other with the top not visible.

Carna is a strong and caring individual. She acts like a older sister to the younger bracers and is very helpful to those that she meets. She is also very much a tomboy.

Carna works mainly from the Ruan Branch. Carna is one of the most senior members and has been close friends with Scherazard Harvey for a long time. She also gets along with Kurt Nardin, Grant, and Anelace Elfead.

After Mercia Orphanage is burned down, Carna arrives and helps to take of Matron Theresa and the children. At Jenis Royal Academy's School Festival, Carna meets up with Estelle and Joshua and explains that she had been hired as security detail for some of the Alumni. She then becomes one of the audience members at Estelle and Joshua's play. After the play, Carna is there when Matron Theresa receives the charity money that the school had raised for them. Dean Collins and Carna then reveal to everyone that she has been hired by Dean Collins to escort Matron Theresa back to Manoria Village as her personal security detail.

However, on the way back to Manoria Village, Carna, Matron Theresa and the children are attacked by some thieves and Carna gets hurt in the attack. The children reveal that Carna had done her best to drive the thieves off, but the thieves had thrown sleeping powder straight in her face and caused her and Matron Theresa to collapse. While Carna was unconscious, the thieves then made off with the money. Carna then stays asleep while Estelle, Joshua, Kloe and Agate Crosner go to reclaim the money from the thieves. When Estelle and co. arrest the culprits, Carna locks the thieves up in Manoria Village's storage shed and guards them until the Royal Army arrive to arrest them.

Carna is spotted again in the City of Grancel. She is seen greeting Estelle and Joshua when they arrive at the Grancel Bracer Branch and informs them that she, Kurt, Grant and Anelace are going to be participating in the Martial Arts Tournament. After winning the first round of the tournament, Carna and the others inform Estelle that the Martial Arts Tournament was originally an individual tournament, but somehow suddenly got changed into a team tournament at the last minute. She and the others then suggest to Estelle that she and Joshua should join Zin Vathek's team if they want to see the Queen; as he needs team members. Carna and her team are then seen losing to Zin's team in the Semi-Finals and cheers their team on in the finals.

After Estelle and the others come back from Grancel Castle, Carna is summoned to the Bracer Guild where she finds out about the rescue operation to rescue Princess Klaudia and the other hostages. She then participates in the operation by distracting the guards and taking them out. After Princess Klaudia is rescued, Carna then participates in the Grancel Castle recapture operation and helps retake the Castle. She is then present when the Queen thanks them during the Queen's Birthday Celebration Speech and is present during Estelle and Joshua's promotion ceremony to senior bracers.

Carna is first introduced as one of the pseudo-jaegers during Estelle's and Anelace's final test in the training program. Carna and Grant walk out of the back room and remove their masks revealing themselves to Estelle and Anelace. Estelle reveals to Elnan upon her return to Liberl that that Carna had stayed behind at Le Locle because she wanted to do some high-level training with Kurt and Grant, so they wouldn't be back for a while.

She returns to Liberl after the Ragnard incident and helps Kurt investigate a suspected Ouroboros base in the middle of Lake Valleria. Whilst there, she is defeated and hypnotised, fighting Estelle and her team when they come to rescue them all. Carna notes the research staff and jaeger guards have all left. She is too exhausted to continue fighting.

During the Orbal Shutdown Phenomenon, Carna escorts the Mercia Orphanage occupants to safety in Manoria, relying on an old Reinford gunpowder assault rifle as her usual weapon is down. She states it is noisier, heavier and runs out of ammo quickly, but has plenty of stopping power. her actions are, as she says, a way of paying Estelle back for the rescue.

A replica of Carna is recreated in Phantasma to serve as a guardian in the Looking Glass on the Sixth Plane. It is defeated, unlocking the way forward. 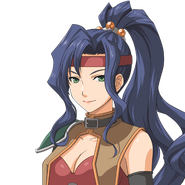 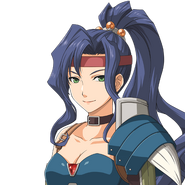 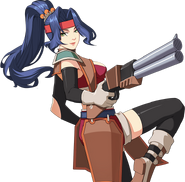 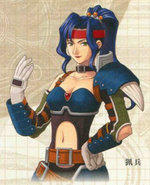 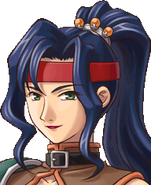 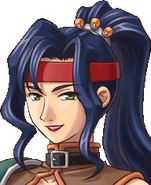 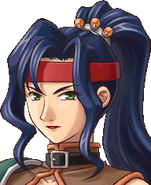 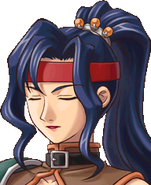 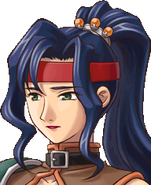 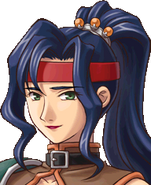 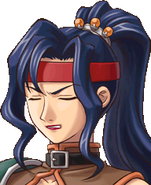 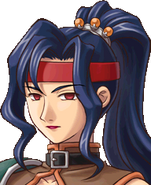 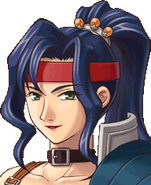 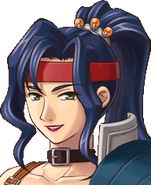 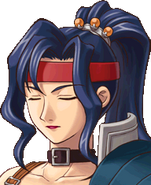