“How is a "second-rate" branch school worthy of the Ashen Chevalier?”
— Cedric Reise Arnor, Trails of Cold Steel III

Cedric is a young man with short blonde hair and bright blue eyes, traits he shares with other members of his family. In his first appearance as Imperial prince, he wears a coat of red, black and gold, with a white shirt, cravat and trousers, and black boots.

As he gets older, he becomes much taller and more well built. He is usually seen wearing the new uniform of Thors Military Academy, consisting of a red and black blazer with gold accents, black trousers and brown leather shoes.

Cedric uses an ornate double-edged sabre in combat, with a gold handle and guard, and a red fuller stretching down the blade.

Cedric has always been known as a kind and gentle boy, albeit timid and lacking the self-confidence, strength and determination required to rule a kingdom. Although aware of this, he is plagued with self-guilt over his inability to stand out, as he even considers his sister Alfin to be better than him. He considered Olivert and Chancellor Giliath Osborne to be ideal models. This awakens a small tint of jealousy inside him, but it is not potent enough to overwrite his thinking and personality.

Following a recovery after being forcibly used to awaken Testa-Rossa during the end of the Erebonian Civil War, Cedric returned as completely different person. He was much more confident and arrogant in his ways, lacking his past self's timidness and meekness. The Erebonian Curse was said to have influenced Cedric's change of personality. His past friendship with Kurt Vander had also become strained by that point with Cedric beginning to mock Kurt casually in front of his friends and Classmates.

Once he joined Osborne and the other Ironblood members, he was willing to help them spread the Erebonian Curse throughout the country and managed to convince the entire Thors Main Campus to help them achieve their goals. Once the Nameless One was awakened and they prepared to kill it, Cedric was willing to choke Altina Orion to death so she would become the weapon they needed to kill the corrupted Holy Beast.

After the events of Cold Steel III, the curse had eroded Cedric until the point where he becomes somehow arrogant and drunk in power after obtaining Tessa-Rosa. He is also annoyed at the fact that he cannot defeat Kurt, Ash and Juna who are piloting Panzer Soldats, and is now a person who is willing to get revenge on those who have put a dent on his pride. His relationship with Kurt had also become antagonistic with Kurt disgusted by how far Cedric had fallen.

He seemed to not care about his siblings' wellbeing anymore as he is now a person who wanted to "change the world" like Osborne, and is willing to put aside his personal feelings to achieve that goal. He also seemingly didn't care that the rest of the students from Thors Main Campus eventually stopped following him and Osborne.

Right before his Rivalry fight with Class VII however, Cedric began to realize that he was letting the curse influence his actions when Class VII asked him what he was so afraid of and reminded him that he would eventually have to fight Osborne himself if he won their rivalry battle. While he was disgusted by how he had been acting under the influence of the curse, he still decided to fight them alongside Shirley after she reminded him why he originally wanted to help Osborne to show them his newfound resolve.

After he lost the rivalry battle, Cedric's friendship with Kurt begins to mend after he told him not to take his loss so seriously and that they should continue as friends and rivals before he passed out from exhaustion. once he regained conscienceness, he asked Shirley to let him join Ouroboros as an Enforcer and believed that Erebonia would be in better hands with his brother and sister.

During Cedric's Enforcer training, he began to realize that his pride and his identity of being the crown prince of Erebonia was holding him back and eventually let them go in order to finish his training. After becoming Enforcer XIX, Cedric learned of his older brother's wedding and watched it from a distance and showing that his love for his siblings had been restored.

Cedric is a frail boy who possesses many doubts over being a successor to the rulership of the empire. He was born in S.1189. As Alfin is female and Olivert has commoner heritage, Cedric is the apparent Crown Prince.

During the Erebonian Civil War, Cedric was held captive under the pretension of protection (alongside his parents and Governor Carl Regnitz) in the Karel Imperial Villa at the outskirts of Heimdallr. When Duke Cayenne found that only members of the Reise Arnor family could awaken the Divine Knight Testa-Rossa, he took Cedric to the basement below the Valflame Palace where the Divine Knight was kept sealed. Duke Cayenne forced Cedric into the Divine Knight, and from the combination of the Reise Arnor family's bloodline, and the cursed Testa-Rossa, emerged the Vermillion Apocalypse.

Cedric was saved from the Vermillion Apocalypse's core by Valimar's pilot Rean Schwarzer, and Ordine's pilot Crow Armbrust, a terrorist who sacrificed his life in order to save Cedric's.

After the Testa-Rossa incident, despite medical treatment, Cedric's health continued to lag behind. He enrolled at Thors Military Academy in S.1205, but let his first year slip through his fingers due to his medical condition. In S.1206, he once again appeared before his instructors, this time as a radically changed person. It was not only the Civil War that had affected him, but something happened during his medical treatment as well. During his time as a student, Cedric saw Thors Branch Campus as a rival to his own.

Cedric's respect for Osborne has grown stronger as he now has a firmer grip on the Imperial government. He also respects Rean as the hero who saved him during the Civil War. Cedric wanted to see Rean come to the old campus, along with one of Rean's students: Kurt Vander, who was supposed to be Cedric's guardian, akin to how Kurt's older brother was the guardian of Olivert.

In the end of the game, Cedric attempted to strangle Altina, but was stopped. It is also revealed that he now has full control over Testa-Rossa (his Divine Knight), and stood by Giliath Osborne during the outbreak of the Great Twilight in the Gral of Erebos. He accepted the apparent death of his older brother when his airship was blown up to keep its passengers from interfering in Osborne's plans.

During this game, Cedric makes a partner out of Shirley Orlando, who is said to care for Cedric due to his similar age to her and inner darkness. He continues to fight for Osborne, first sparring alongside Shirley and the students of the main campus (including Ada and Fritz) against New Class VII in the Osgiliath Basin, and then later fighting alongside George Nome and Rutger Claussell aboard the Pantagruel. After the latter fight, Cedric learns that his older brother is alive, but this does not sway his loyalty to Osborne.

During one of Alfin's bonding events, Cedric sends a letter to her for a parley with a person of her choosing. She picks Rean to accompany her to the meeting spot. Cedric tries to convince Alfin to return home, but fails to do so.

Alongside Shirley, Cedric and Rean are faced as the second roadblock in the Tuatha De Danann. When Class VII arrived and as Kurt spoke to him, Cedric appeared to have doubts about being manipulated by Osborne and the actions he had done, including harming his own family. Shirley snapped Cedric back to his senses by reminding him why he joined, thanking her and Class VII before formally challenging them to battle.

After an initial scuffle (during which Shirley held back), Cedric summoned Testa-Rossa, and together with two Melgea units, he held the Fourth Rivalry against Rean Schwarzer, Crow Armbrust, and the Soldats of New Class VII (including Kurt's). Cedric was defeated and lamented his loss, before Kurt reassured him that he shouldn't take it too seriously and that they continue on as friends and rivals. As a result of losing the Rivalry, Cedric lost his Divine Knight as it was absorbed into Rean's. Overcome, Cedric fainted from exhaustion. Shirley followed soon after, declining to continue fighting despite having some strength left in her.

The two came to sometime later where they witnessed Ishmelga's death. He asked Shirley if he could join Ouroboros, who accepted his request after he explained why he wanted to, hoping to become an Enforcer.

His cooperation with Osborne to start the Great War shook the public's trust in the royal family, which was painstakingly repaired by Alfin and Olivert. The Bracer Guild obtained reports that he had joined Ouroboros as a "high-ranking member". Mariabell Crois later remarks that his ancient bloodline and mana would be a remarkable asset.

Shirley brought Cedric to Ouroboros, where he was placed as an Enforcer candidate. Because of his lavish upbringing as the Crown Prince, Cedric initially struggled with the more intense training of both the Red Constellation and Ouroboros' jaegers, complaining that the main campus had not prepared him for such hardship. When Shirley brought him to the Sun Fort, she ordered him to clear the ruins of the Red Constellation and Ouroboros jaegers, assisted by an experimental combat shell developed by F. Novartis. Much to his bewilderment, but he was forced to complete it after Gareth fired warning shots at him. During the dangerous training, Cedric realized that his pride and identity as the Crown Prince had been holding him back all along and let go of them, allowing him to successfully complete the training, much to Shirley's delight.

He eventually completed his Enforcer trials, becoming Enforcer XIX. Sometime after becoming an Enforcer, Cedric learned of his brother's wedding to Scherazard Harvey and observed from a distance. 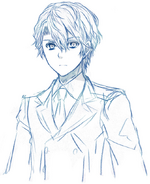 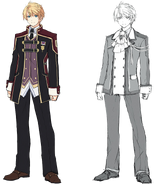