Celine is a black cat with yellow eyes and purple tufts of fur on her paws, chest tail tip and ears. She has a blue collar with a small Hexen bell around her neck, and a blue ribbon tied to her tail.

Celine's human form takes the form of a young girl with darker skin, some of which is covered in black fur. She retains her claws, fangs, and tail, and also has two large cat ears extending from her hair. She wears a single black dress which appears to be made of a leathery like materials that is split from the bust downwards and covered in a series of belts to keep it together. Her collar and bell are incorporated into the collar of this new dress. She goes barefooted.

Celine has a shy and mysterious personality. She can be cold and harsh, yet also shows a warm side to people like Emma, Elise Schwarzer and Princess Alfin Reise Arnor. She also often encourages others to find their own answers. She does admit sometimes that there are certain mysteries of which even she is not aware of the answer to. She also does not seem to be fond of the Septian Church, possibly due to witches having been prosecuted by them at one point in time.

Celine shows a great deal of dislike towards Vita Clotilde and her familiar Grianos because of her betrayal of Hexen Clan law. Unlike Grianos, Celine is capable of human speech.

Celine was created by Roselia as a conduit for for of her powers, and to provide a successor for the Holy Beast should Roselia herself ever fall. Celine serves as Emma's familiar and guide to the world of magic. She has been informed about a great deal of things related to magic from Emma's grandmother (e.g. Spirit Shrines) and knows a great deal of magic herself.

Celine is first seen lurking around the Old Schoolhouse building as well as at several other places around Trista. She appears to be an ordinary cat at first until Rean almost catches her talking to Emma one time. Emma though just tells Rean that Celine is a cat that she had smuggled in.

After this encounter, Celine begins acts even more mysterious and begins to pull suspicious stunts. One such stunt is when Celine lures Elise Schwarzer to the chamber where the first guardian is located in the Old Schoolhouse. She then watches on as the Guardian begins to attack Rean and watches the awakening of his Oni powers. When the rest of Class VII come down to help Rean, Emma notices Celine and glares at her in anger.

When Rean's group goes to Legram for a field study, Celine is seen secretly boarding their train. Later that night, Celine has a secret conversation with Emma. In the conversation, Celine notes Victor S. Arseid's perceptiveness, but states that he probably won't notice her midnight stroll. She then expresses doubts about the reliability of Rean's combat skills, to which Emma tells her that it's not for them to decide.

Emma then sternly reminds Celine about their role as Overseers and that their job is only to watch and guide Rean - not to jump to conclusions or pull stupid stunts in order to force his progress. Emma then warns Celine to never pull what she did again, as they are only meant to be Overseers and that her actions could've gotten Elise killed. Celine shakes it off though and warns Emma about a mysterious power within the Saint's Castle.

Celine then watches over the group from a safe distance as they explore Lohengrin Castle to find some missing boys. She then follows the group to Garrelia Fortress and resumes her role as Overseer for the rest of the game.

During the preparations for the school festival, Celine and Emma escort Rean and Class VII to where the last trial awaits them. After Valimar is discovered, Celine continues to wait until Vita Clotilde reveals herself during the assassination attempt on Giliath Osborne.

During the Invasion of Trista, Celine reveals herself and her ability to talk in front of Class VII and helps Rean activate Valimar for the first time. After Valimar is badly damaged during Rean's fight with Crow Armbrust, Celine commands Valimar to withdraw despite Rean's outbursts of his desire to stay with his classmates. Celine then watches over Valimar and Rean until they fully recover.

Celine is first seen when Rean wakes up in the Eisengard Range. She informs Rean on what has happened and of his status as a Awakener. She then informs Rean that Valimar still needs to charge as he used all of his energy to heal Rean. As the two of them walk down the mountain to reach Ymir, Celine tries to talk to Rean several times, though Rean just mostly ignores her because he is more concerned about his friends' safety. Lashing out at him, Rean apologizes to Celine for his behavior.

When Rean becomes aware that Celine had purposely lured Elise to the guardian, Rean gets angry and scolds Celine. Celine though brushes it off by saying that the Guardian wouldn't have attacked Elise as its been pre-programmed to attack only the Awakener candidate, earning another angry glare from Rean. Seeing his face, Celine also admits that she felt bad about what happened and apologizes to him.

Celine continues to assist Emma in her duties across the Empire, and in her search for Vita. They reunite with Rean and the new Class VII in Crossbell. When Rean summons Valimar, Celine once again, usually accompanies him. She strikes up a rivalry with Coppe, the cat on the roof of the SSS' headquarters. Throughout the story, Celine continue to provide information about the history of the spiritual side of the Empire, as well as complain about Vita.

Celine attempts to get through to Rean in the Gral of Erebos, but is swept up in the teleportation back to the Black Workshop, where she remains with the captive Rean, unable to contact the others. Trails of Cold Steel IV reveals Celine can take on two forms - a young girl, and a cat. She prefers staying in her cat form and shares the traits of one, such as a dislike of dogs. It is in this human form that she assists Rean when he breaks free after sensing his allies close by.

Celine continues to provide assistance to Emma and Class VII from thereon, most notably when she is needed at the Lunar Sanctuary. The Sanctuary's ability to reveal the truth forces Celine into her human form. Roselia reveals Celine and Grianos's true origin as separated parts of her power and back ups that could become the new Holy Beast of Fire should Roselia ever fall. They would do this by visiting the Lunar Shrine.

After learning the truth, Celine continues to aid Class VII, up to the final battle where she joins them for the assault on the Tuatha De Danann.

Celine is part of the party of witches that accompanies Emma to the White Shrine after finding a journal by Emma's mother Isola Millstein. They pass the trials and find a message from Isola in the Shrine's depths.

Celine takes her human form on to assist Rean in locating the Sonorous Seashell which is somewhere in Mishelam Wonderland. They track it down to the Castle of Mirrors where Celine encounters a Simulacrum of herself which must be defeated. Celine is then present for the final battle against Elysium and Reverse Babel, lending her magic to help teleport the large group inside. 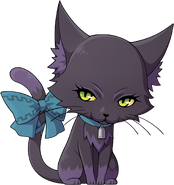 Rex's Photo of Celine and Roselia 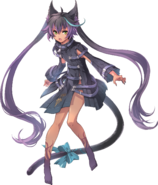 Promotional Screenshot of Celine with Zeit