Kiseki Wiki
Register
Don't have an account?
Sign In
Advertisement
in: Stubs, Characters, Kuro no Kiseki Characters,
and 3 more

comments about her appearance

v · e
Celis Ortesia (セリス・オルテシア) is a knight of the Gralsritter of the Septian Church and occupies the seat of Fourth Dominion.

Celis is a short woman with long bright red hair and turquoise eyes. She wears a variation of the uniform of the Gralsritter, predominantly crimson and black in colour, with white accents. This variation features a long black skirt with a fleur-de-lis motif, black tights and red laced boots, a black corset and white collared shirt. She wears her sword arm, the right with the long sleeve rolled up.

In contrast to her traveling companion Rion Balthazar, Celis is quick to anger and irritable. Due to her small stature, Celis is self-conscious about her age and how she appears, and will quickly starta fight with anyone who aggravates her.

Like Rion Balthazar, Celis was trained or mentored by Bergard Zeman. At an unknown point in time, Celis took the position of the fourth Dominion of the Gralsritter. Bergard notes she is amongst the highest ranking.

At the time of the battle at Reverse Babel, Celis could not take part as she was leading another team.

Alongside Rion, Celis is active in the effort to defeat Almata. During this time, the two of them are shown to have a hostile relationship with Ashrad, a member of the Papal Guard, which has conflicting views with the Gralsritter. She first shows up the the Dark-Light District of Edith where she calls out Ashrad for taking part in the clandestine meeting between different meeting parties discussing Almata. She calls out Van Arkride and immediately begins hostilities, recognising him as a fellow disciple of Zeman. Celis also gets into a confrontation with Walter Kron.

Celis and Rion take part in Almata's death game in Oración, first coming into combat against Ashrad and Isacarion. They engage their stigmas but Bergard intervenes and breaks up the fight. Discovering he was actually alive, they decide not to fight and move on. Van and company meet up with her later in the city and she mocks Iscarion for both units being defeated at once. She explains her primary objective in the city is the recovery of artefacts used by Almata and Garden. Later, the pair of Dominions face off against either Hasan Al-Fayed or Geraint Leger but are forced to withdraw from the game after Arioch makes an appearance. She makes one more appearance after the game to take over the battle against Arioch's Fang of Ragot and makes it out when the Vashtar Palace Ruins explode.

Both Celis and Rion have undisclosed business in the capital in the lead up to Revolution Day, with some part of this being rounding up remnants of Almata. Father Orwell lets them use his chapel as a base of operations. Celis wonders why Bergard would travel around with Van when they run into each other. She arrives too late to stop Amdo-Jiliath when it manifests below Edith, sensing the presence of an arch-devil, having been beaten by Van's party. She attends the celebration party at the Montmart Bistro.

On Revolution Day, Celis travels with Elaine and Rixia to the bakery. After they pay the bill, they are caught up in Pandemonium and Celis wastes no time in slaying the fiends that manifest. She gives aid to Van and the group but doesn't accompany them as they have Bergard and she wants to search on her own. She lends her spiritual sensing ability (although she admits she isn't as skilled with it) to find Quatre Salision and gets into another quarrel with Walter. She uses her stigma to help bring down the barrier blocking access to Genesis Tower.

In the New Year, Celis travels back to Arteria with Bergard and Rion and meets up with other Dominion. 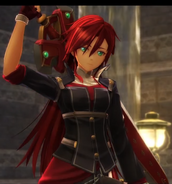