Kiseki Wiki
Register
Don't have an account?
Sign In
Advertisement
in: Characters, Bracers, Akatsuki no Kiseki Characters,
and 3 more

Fire
v · e
Chloe Barnett (クロエ・バーネット) is a junior bracer from Ruan, Liberl. She is the protagonist of Akatsuki no Kiseki.

Sporting a black bob cut, Chloe is a young woman with black hair and scarlet eyes. There are two sakura blossom pins in her hair. She wears a white top with several buckles, with a small red jacket and matching skirt. She wears thigh high boots, a small mint green neck tie and a large flared semi-fingerless glove on one hand. Chloe wears an ornate katana and accompanying purple sheath.

Chloe is an energetic girl inspired by the travelogues and heroic epics traditionally associated with boys. She sometimes makes rash decisions due to her impulse-driven personality. In her line of work as a bracer, she is extremely proactive. On the one hand, Chloe has a solid grasp on the world of economics thanks to her time as a student at Jenis Royal Academy. On the other, her attitude toward society's underworld and criminality is naive, calling it "unforgivable". This makes her a great partner for Nacht Weiss, who is intimately familiar with society's dark side.

Chloe wields a sword in battle. She is completely self-taught, practising what she calls the 'Chloe school'[JP 1] and crafts she invented herself based on moves described in the adventure novels she loves to read; she has no experience with any of the formal schools of swordsmanship.

Chloe was born with a fatal chronic disease and it was stated that she would not be able to live until the age of 16. Even as she beat the odds and managed to enter Jenis Royal Academy, she spent most of her days at the school going straight to the infirmary. Thanks to medical advances in S.1203,[Note 1] she miraculously recovers from the disease. Chloe wants to repay the St. Ursula Medical College she was hospitalised in and admired the bracers who resolved the Orbal Shutdown Phenomenon in Liberl, leading her to the decision to drop out the academy and pursue a career as a bracer.

Although she has a lot of knowledge about Liberl, but little first-hand experience with the kingdom because of her history of being bedridden and hospitalised. She also knew no bracers, aside from what she heard and read in the papers. Since she was raised in City of Ruan, she is highly familiar with the downfall of its mayor, Morris Dalmore, and his secretary, Gilbert Stein, as told in Trails in the Sky FC, Chapter 2: "Madrigal of the White Magnolia". She was acquainted with neither, however. 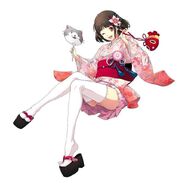