Orbal Gun
v · e
Claire Rieveldt (クレア・リーヴェルト), also known as the Icy Maiden (), is introduced as a commissioned captain in charge of the Railway Military Police and a member of the Ironbloods.

She appears as a young woman with long sky-blue hair pony-tailed in a side-curly fashion and red eyes. She appears in the standard RMP officers' uniform, consisting of a gray and black two piece with several utility belts, brown boots which her trousers are tucked into and a short pointed cape on the back. She also wears a small cap and black scrunchie in her hair.

When not on active RMP duty, Claire wears a green-blue minidress over a black turtle-neck sweater with a fleece lined bomber jacket and gray knee-high boots.

Claire uses a large orbal pistol in combat, as well as several orbal 'mirror devices' that she can send out and control at will to angle an reflect her shots. On some occasions, Claire makes use of an orbal sniper rifle.

True to her nickname "The Icy Maiden," Claire can be a cold, calculating person when on duty. She is devoted to serving Chancellor Giliath Osborne and is especially devoted to her job. However, Claire does display a softer side and likes to watch and protect her juniors from Thors Military Academy. This is especially true of Rean Schwarzer, whom she has a special attachment to after feeling he is similar to her brother.

Claire's father was the president of the Rieveldt Company. Her uncle served as its vice-president. Claire loved her family and got along well with her cousin, Michael (who was her uncle's son).

However, in S.1196, everything changed after a car crash took the lives of Claire's father, mother and little brother Emil with Claire being the only survivor. The culprit fled from the scene so the crime couldn't be solved. Claire was taken in by her uncle's family.

She was very happy and got along with the members of her new family, but privately, she wondered why she was the only survivor.

When Claire was going through the documents left by her father, she noticed something strange. Her uncle, the vice-president of the company, was secretly making profit by selling cheaper instruments as "high-quality Rieveldt products". Her father tried to stop the scam before the car accident, which she found unusual.

When Claire confronted her uncle about this, he admitted that he had orchestrated her father's death, confident that he had disposed of all of the evidence and that he had numerous nobles supporting his scheme.

Claire soon met with Chancellor Giliath Osborne. He told Claire how he had known her father since his days in Thors Military Academy. Claire was amazed how Osborne knew the whole truth behind the incident. He tells Claire how he was planning to judge the incident personally, but had just changed his mind.

Osborne also shares how he noticed her ability, what he calls "enhanced cognition". Taking her family's car accident as an example, he explained she demonstrated the an innate ability to instantly grasp the whole through its parts. Osborne told Claire that she should take revenge for her lost family by bringing her uncle to justice.

Claire made up her mind and decided to gather any possible evidence that could prove her uncle guilty. While Claire was collecting evidence, Marquis Hyarms heard about the incident and forced the nobles behind Claire's uncle to withdraw their support.

With all the proof she had gathered, Claire was able to prove her uncle guilty and he received a death sentence. Her adoptive family broke up after the incident. Claire reclaimed ownership of the company, but decided to hand those rights over to a veteran employee of the company and decided to follow Chancellor Osborne's advice to enter Thors Military Academy.

Claire was the top student during her time there, eventually landing a position as a captain in the Railway Military Police. She gained a reputation as the "Icy Maiden" for her somewhat cold, yet calculating personality. She also joined the Ironbloods around this time, maintaining a good relationship with the youngest member, Millium Orion.

As part of her duties as an Ironblood and Railway Military Police captain, Claire often worked with the Intelligence Division in order to maintain Erebonia's security, dealing with both internal threats and disputes between her subordinates and the provincial armies.

Claire helps apprehend individuals at the Lunaria Nature Park, assists security in Heimdallr, gets involved in a dispute with the Nortia Province army and helps investigate the Imperial Liberation Front in the Sachsen Iron Mine.

During Osborne's speech in Heimdallr in 18 August S.1204, Claire had been informed that Crow Armbrust was C, the ringleader of the Imperial Liberation Front. She was too late to stop him from apparently stopping Osborne and watched in shock as the Noble Alliance deployed new, secret weapons to seize Heimdallr.

Claire was able to escape Heimdallr in the ensuing chaos. At the start of the Erebonian Civil War, she decides to team up with Class VII, switching to a civilian garb to avoid unwanted attention. Fighting alongside the students gave her a newfound appreciation for her alma mater. Class VII's position as a third, unaffiliated party allows the Imperial government to make significant gains over the Noble Alliance, eventually culminating with her launching a counter-offensive to retake Heimdallr.

After the civil war, Claire is rewarded with a promotion from captain to major. She also gains command over the whole Railway Military Police, which now includes the annexed state of Crossbell. She visits Leeves to hand over the Derfflinger and meets Rean for the first time since the Northern War. Claire is present on several occasions, including investigating the attack by Ouroboros on the Derfflinger, handling Operation: Birdcage in Crossbell and being part of the operation to find Calvardian agents in the capital. Claire volunteers to help Rean and Lechter Arundel find a lost Hercules member during the summer festival.

Claire begins to show some signs of hesitancy for following Osborne's controversial policies, but nonetheless remains loyal to him out of gratitude for saving her in her youth.

She and the other Ironbloods are present as the final roadblock in the Gral of Erebos.

Like Lechter, Claire was shaken by Millium's supposed death in the Gral of Erebos. Unlike Lechter, who simply resolved to follow Osborne for Millium's sake, Claire was secretly grappled with guilt for simply allowing the Great Twilight to be ushered in and doing nothing to stop it.

Claire first appears to fight alongside Black Alberich and Mariabell Crois to impede the progress of Estelle Bright, Joshua Bright, Lloyd Bannings, Elie MacDowell, and Renne at Orchis Tower. She then later appears at Ordis where she deploys the Railway Military Police to stop Class VII from rescuing Towa and Empress Priscilla Reise Arnor alongside Red Rosseweise, but they are both defeated. She witnesses Rosseweise return to her normal state as Angelica and is allowed to leave the scene.

The day before the Great War, Claire was fully consumed by guilt and sent an orbal mail to Rean, requesting to meet him in the wetlands of Mishelam. She had worn her Knight of Blood and Iron attire and attempted to instigate Rean to fight her so he could have one less obstacle. Rean refused to fight her, seeming to hold no grudge her despite what she had done. Claire hesitated, before Millium joined in on the conversation. Claire was shocked to see Millium as a spectre, but after hearing her resolve, she decided to prepare herself for their arrival on Tuatha De Danann the following day.

She is fought a final time as the first roadblock inside the fortress alongside Lechter. Despite being powered up by the floating fortress and the Curse, Class VII succeeds in defeating them. Afterwards, she and Lechter are both about to take their own lives, overcome with guilt for what they had done, but their suicide attempts are interrupted. Following Ishmelga's death, Claire and Lechter are unsure who should take the blame, when Rufus appears and offers to turn himself in to the authorities so that the two can continue to help Erebonia in its time of hardship post-war.

Claire calls Sharon and Sara to the capital for assistance when an unknown criminal with advanced technology gets away with data from right under the RMP's noses. They gather leads and data from an investigation until Isara Irving announces herself, whom Claire does not initially recognise. When discussing her family's past with Sara and Sharon, she wonders if it is time for a fresh start. She then receives a call saying Isara has been captured by the Invisible man and they head into the catacombs to confront him. They successfully rescue her and Isara and Claire have a chance to talk.

Claire travels to Ymir, calling Class VII and Rean as well, for an unknown purpose. There, Claire asks Rean if he is truly happy. She escorts them up the mountain where it revealed she is working with Matteus Vander and engage the Class in a battle, trapping Musse and Ash in an electric barrier while she engages Juna and Altina. It all turns out to be a test, after which Claire and Matteus reveal that they are recruiting for a mission to track down the missing Prince Olivert Reise Arnor and his wife. Claire later reveals Crossbell has been attacked but does not yet know all the details.

Claire is present in the final battle against Elysium at Reverse Babel. 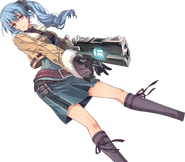 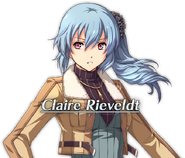 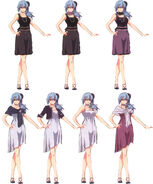 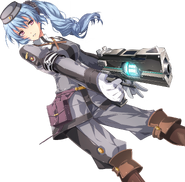 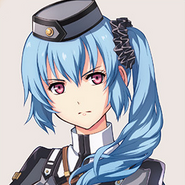 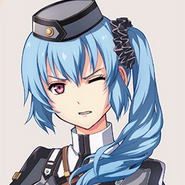 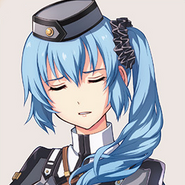 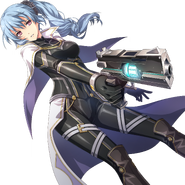 S-craft (Knight of Blood and Iron)

Claire, Millium and Rean in Heimdallr 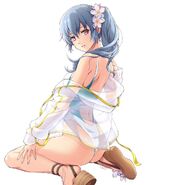