Male
v · e
Clem （クレーム）is one of the young orphans who lives at Mercia Orphanage with Matron Theresa.

Clem is a young boy with messy red hair and blue eyes. He wears a white shirt with a small red ribbon tie and large blue three-quarter shorts with braces. He has small round brown shoes and also wears a large cap with green buttons.

Clem is a cheeky youngster who has a habit of pulling pranks and swiping stuff. He cares about Matron Theresa and the other orphans very deeply and will do anything to protect them. However, this does make him reckless and rude at times.

Clem is then next seen when Estelle and Joshua come to Mercia Orphanage to get her badge back. Seeing Clem show it off to his friends, Mary and Daniel, Estelle rushes in and demands he give it back. Denying that it is hers, Clem runs around for bit and gets tickled by Estelle, when she finally caught him. Suddenly, Kloe comes out and seeing Clem in distress orders Sieg to attack Estelle and confronts her. Seeing Kloe, Clem yells at her to help him. Joshua then comes over and quickly soothes the situation and as he is about to explain Matron Theresa comes out.

Seeing the ruckus, Matron Theresa correctly assumes that Clem has been up to no good again. Clem denies this, but Matron Theresa tricks him into confessing and makes him give the badge back to Estelle. Clem then runs off and reappears when Estelle, Joshua and Kloe are about to head off to Ruan. Finally catching up, he apologizes to Estelle and Joshua and then mocks Estelle for easily allowing her badge to be taken before running back to the Orphanage.

This made Estelle and him clash heads for a while until his home was burned down. It was rumoured that the Raven Gang burned down the orphanage. This made Clem run off on his own and confront the gang which almost caused him to be badly beaten if it wasn't for Estelle Bright and partners to come to his rescue. After being saved by the quartet, Clem started looking up to Estelle and being more wary of his actions.

He also starts helping Matron Theresa with chores, such as chopping wood, and helping his friends more often. Clem can still be a bit of a prankster, though.

Clem is still at the orphanage and wonders why Estelle is not travelling with Joshua. Estelle also meets Clem at Sunday School in Manoria Village where Kevin Graham is reading them The Doll Knight. Clem wants to know more about the fight with Harlequin.

Later, Clem has the opportunity to meet Joshua again when he reunite with Estelle. He comments that there is an airship in the bay which he would like to check out.

Clem leads the group of orphans in a discussion about what present to get for Matron Theresia. The topic of a happiness stone is brought up. Clem and Daniel rush off to find a present, leaving the girls to fend for themselves. he later helps find Mary on the Gull Seaside Way, and expresses his concern and that he said that he would protect her. They combine the amulet he found with Mary's happiness stone to make a gift, then return to the orphanage for a party. 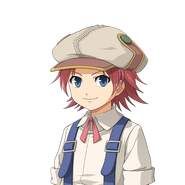 Clem at the party for Theresia 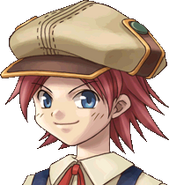 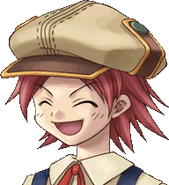 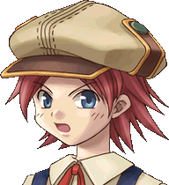 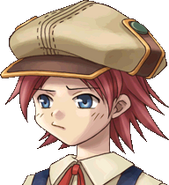 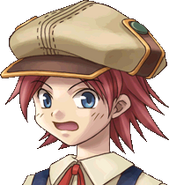 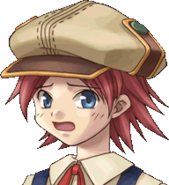 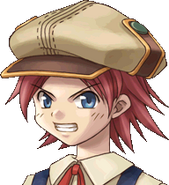 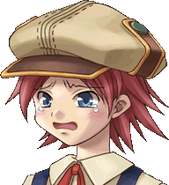 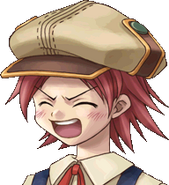