Member of the Royal Assembly

Dean Collins is an elderly man with long wavy white hair and an equally long beard. He has brown eyes and a small eyepiece worn on his nose. Collins wears long violet robes which are hemmed in gold vertically and silver horizontally. A diamond patten descend down the front from his red-belted waist. he wears a black short cape with gold tassels and a mortarboard.

Dean Collins is a kind soul who cares about all of his students. He is also willing to help anybody in need and is aware of Kloe's true identity as Princess Klaudia von Auslese because of his position in the Royal Assembly.

Dean Collins is the headmaster at Jenis Royal Academy and is the one tasked with the administration of the school. He is also a member of the Royal Assembly and is a greatly respected individual around Liberl.

Dean Collins first meets Estelle and Joshua when Kloe brings them over to help out with the School Festival. After he is introduced to them, Collins expresses his admiration of them for becoming Bracers at so young an age. He then expresses his desire to help them in some way with the orphanage fire and endorses the play. He plans a surprise with Jill Ridonor behind the scenes, which turns out to be a huge donation from the proceeds of the play towards the orphanage. Collins hires Carna to escort Theresia, the money and the children back to Manoria Village.

After Mayor Dalmore is arrested, Collins expresses his shock on the matter and hopes that Dalmore will realize his mistakes and try to repent for his crimes.

Dean Collins then reappears again when Estelle and Joshua arrive at Grancel Castle to meet with the Queen, under the pretence of being the Martial Arts Tournament victors. Dean Collins congratulates the pair for winning the tournament and it is explained that Collins is also a member of the Royal Assembly. Mayor Klaus and Dean Collins then talk about all of strange events and insist that they must talk to the Queen. They then mention to Estelle and Joshua that the princess had arrived in Grancel a couple of days ago.

Dean Collins is then seen attending Duke Dunan von Auslese's banquet and becomes upset and appalled by the announcements that he and Alan Richard make about him becoming heir apparent to the throne, Klaudia's arranged marriage and about the terrorists. After the Coup d'etat is thwarted, Dean Collins is seen attending the Queen's speech and then after the speech meets with his students in the lobby of the Roembaum Hotel. Later that night, Dean Collins can be found in his room listening to Joshua's harmonica playing.

Dean Collins grants Estelle and her group permission to investigate the campus in regards to the sightings of the white ghost.

Later, when Gilbert Stein attacks the Academy in search of the princess, Collins expresses his disappointment. When Estelle and the Bracers arrive to liberate them, he sincerely thanks them and wishes them well against the threat the society poses.

Dean Collins is at the celebratory banquet where he tells Mayor Maybelle that the occupation of Jenis was a shock to the students but no real harm was done.

In a Memory door, it is revealed how he first consoled Klaudia upon her enrolment to the Academy and how it was not to do with giving her special treatment due to her status, but her own merits. he continues to highlight how Lechter understands his actions and their consequences, but ultimately will do the right thing. He states Lechter likes to sleep in his office. 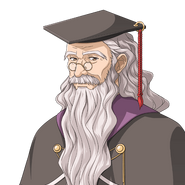 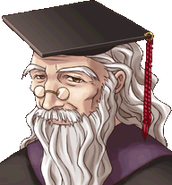 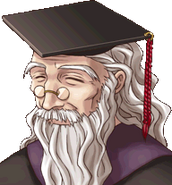 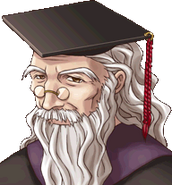 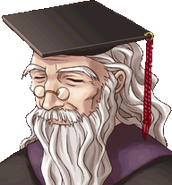