v · e
The Crawfords (クロフォード) are the family of Juna Crawford, including her mother, Lina; father, Matthew; and siblings, Ken and Nana. Together they live in the Bellheim Apartments at West Street, Crossbell City.

Lina Crawford (リナ・クロフォード) is the mother of Juna, Ken and Nana Crawford and the wife of Matthew.

Lina is a stout woman with blue eyes and bright pink hair cropped quite short. She wears a blue and pale yellow blouse and dark blue skirt with an apron draped above.

She is a housewife, looking after their apartment in Crossbell City's West Street Bellheim apartments. She is very welcoming, preparing tea for Class VII and exclaiming how she has heard much from her daughter, and asks the class to excuse her daughter's rudeness.

Matthew Crawford is the father of Juna, Ken and Nana and the husband of Lina. He works at the Planning and Sales Department of Hotel Delphinia in Mishelam.

Matthew is also quite a large figure. he has brown hair cut short and wears glasses. he dresses quite plainly, having a white polo shirt and brown trousers with a leather belt.

Juna Crawford is the the eldest child of Matthew and Lina.

Ken Crawford is the son of Matthew and Lina, Juna's younger brother and twin brother to Nana.

Ken is relatively short and has blue eyes and pink hair in the same shades of his mother, whom he inherited them from. His hair is kept short and messy. Ken wears a long red shirt with a green hoodie on top, brown shorts and red sneakers.

The pair of twins are extremely lively and inquisitive, rushing up to ask personal questions and probe for more information about their elder sister. Ken attends Sunday School under the tutelage of Sister Mabel alongside good friends Colin Hayworth and KeA Bannings.

Nana Crawford is the youngest daughter of Matthew and Lina, Juna's younger sister and twin sister to Ken.

Nana is relatively short and has blue eyes and pink hair in the same shades of her mother, whom she inherited them from. her hair is kept in two short pigtails by bands with a pair of yellow pom-poms. Nana wears a colourful, white, blue, black and yellow top with short button up sleeves, a yellow polka dot skirt and blue sneakers.

The pair of twins are extremely lively and inquisitive, rushing up to ask personal questions and probe for more information about their elder sister. Nana attends Sunday School under the tutelage of Sister Mabel alongside good friends Colin Hayworth and KeA Bannings.

During the annexation of Crossbell, Rean Schwarzer piloting his Divine Knight, Valimar, saved the life of Juna and her siblings by intercepting a falling Republic Army of Calvardian airship.

Juna Crawford is the first member of the family to be introduced as part of the new Class VII at Thors Branch Campus. On their field exercise in Crossbell City. Juna is noticeably nervous when West Street is mentioned as it is the location of her family's home. After reluctantly getting Juna to agree, Rean and Class VII decide to visit the apartment where they are introduced to Lina and Juna's two siblings who eagerly rush up to embrace her. Class VII have tea with the Crawfords before continuing with their field exercise.

Class VII infiltrates Crossbell in order to search for an Occult Point that Roselia had sensed in the area. Arriving at the city, Juna is nervous that her family is marked by the Imperial Defense Force due to being part of the branch campus, but is reassured when she learns that nothing had happened to them. After a brief reunion with her mother and siblings, they head off to Mishelam to find her father, who gives them a key to the marshlands after hearing of their story. This in turn allows the group to discover the final Divine Knight, El-Prado, piloted by Rufus, along with the Occult Point.

Matthew returns in Hotel Delphina, beckoning Rean's party inside a store to help them avoid the patrols of the Supreme Commander's forces. Later he stands in surprise as hotel guests run screaming from the beachfront when two mechanical gargoyles are spotted.

Lina, Ken and Nana attend the Thors Branch Campus festival, cheering on Juna. They also encounter C's party in Crossbell city, wishing him well on his mission for the good of Crossbell. Ken points out the mask and asks why he is wearing it. 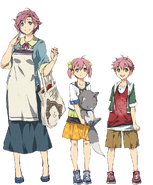 Lina with Ken and Nana