S.1134
v · e
The Crossbell State (クロスベル), formerly known as Crossbell Province (クロスベル), is a landlocked, self-governing demilitarised buffer state located in western Zemuria. It is bordered by Erebonia to the west and by Calvard to the east.

The history of Crossbell is incredibly complex. Located historically at the convergence point between the Erebonian Empire and Calvard Republic, the city has been site of an extraordinary number of battles between various groups of people.

With its geographical position along a route between Erebonia and Calvard, Crossbell became an important trade centre in West Zemuria. The wars from the Dark Ages continued during the Middle Ages, laying ruin to whatever had become of the city of numerous occasions.

In a period of five centuries, between c. S.600 and S.1130, ownership of the area changed at least five times. The territory was a province of Erebonia[1] when it was proposed to have a tributary state established, over which both nations would gain suzerainty. Both nations agreed to the proposal and Crossbell was established.

Crossbell became the heart of Zemuria's international economy. Crossbell became the test site for Epstein Foundation's Orbal Network, a direct data connection between orbal computers within Crossbell and with Leman. Despite Crossbell's growth and its interest to gain a more global point of view, the chance of whether the state would ever become a country remained low.

After a brief referendum, Mayor Dieter Crois declared Crossbell's independence on 23 October S.1204 and subsequently had the IBC freeze the assets of both Erebonia and Calvard. Dieter Crois assumed office as president and held an inaugural speech at the Orchis Tower.

Immediately after the speech, the 5th Armored Division of Erebonia's Imperial Army and Calvard's Republic Air Force invaded Crossbell, only to meet complete annihilation through the means of Ouroboros developed Aions. In the process, Garrelia Fortress was wiped out by Aion Type-α, powered by the Sept-Terrion of Zero.

The independence did not last long, as Henry declared Dieter's declaration of independence invalid, coupled with him being overthrown by the Special Support Section and arrested for treason.

Meanwhile in Erebonia, the nation was dealing with a civil war, but around the same time Dieter was arrested, the Imperial faction finished absorbing the remnants of the Noble Alliance and set to invade Crossbell. Within a single day and without bloodshed, its capital fell in the hands of Erebonia. On 14 January S.1205, recently re-appointed Mayor Henry MacDowell signed a treaty with Erebonia and forfeited Crossbell's autonomy; the state became Erebonia's Crossbell Province once again. In February that year, newly appointed Governor Rufus Albarea announced that Crossbell would merge with Erebonia. With the power of Valimar, opposing forces from Calvard were easily stopped at the eastern border, ensuring that Crossbell would be kept by the Imperial Army.

After the Great War ended, Rufus was arrested for perpetrating the war. His group Imperial Defense Force personnel that remained in Crossbell City attempted to regain control of the situation, but they were eventually forced to surrender around February S.1207 by the SSS and Crossbell Guardian Force. With the backing of the Septian Church, Crossbell was finally able to secure its independence.

Before Henry could sign the documents formally declaring Crossbell's independence, the ceremony was interrupted by Rufus and his newly formed Black Guard. He declared himself the Supreme Leader and took over the country by force, armed with new technology that had never been seen before. During the events of the game, it is eventually realized that the Supreme Leader is a fake, created by Elysium after it malfunctioned. The Supreme Leader and his Black Guard are eventually disposed of by the SSS and their affiliates after several months of fighting, and with the situation resolved, Henry resumes the independence ceremony, allowing Crossbell to become a fully independent, recognized state.

Crossbell is located in western Zemuria. It is landlocked, bordered by to the west by Erebonia, separated by the Erebonia operated Garrelia Fortress; on the east, it is bordered by Calvard. In the centre of Crossbell lies its capital, Crossbell City, which is technologically advanced in contrast to the few surroundings villages, except St. Ursula Medical College in the south. Southeast of the capital lies Lake Elm. The Mishelam wellness resort and attraction park is built south of it on the banks of the Marshland of the Blue.

To protect itself from external threats, Crossbell makes use of natural defenses in addition to two gates. In the west, across the Garrelia Fortress and adjacent ravine, stands the Bellguard Gate; it is protected in the east by the Tangram Gate, built amidst the Tangram Hills, and the Kylo River, which flows alongside Crossbell's eastern border into Calvard. 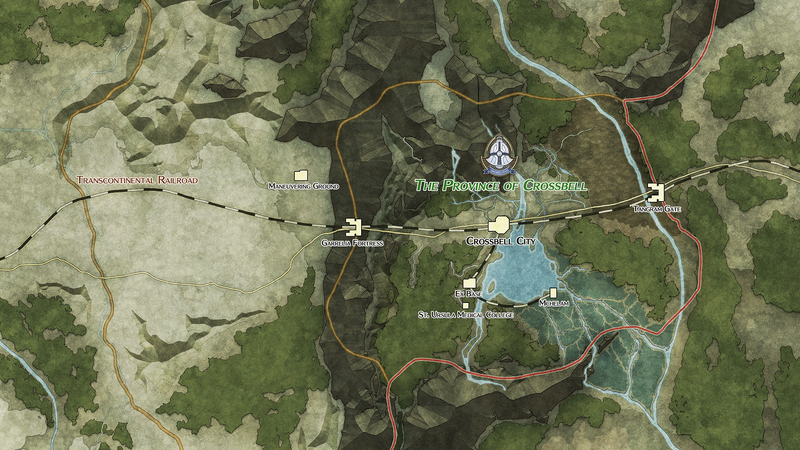 As an autonomous state under suzerainty of Erebonia and Calvard and therefore not an actual state, Crossbell is governed following a state-like government system. Although Crossbell has the right of self-government as long as it is granted by Erebonia and Calvard, it does not hold state sovereignty. Crossbell's mayor and the members of its parliament are directly elected through the means of democratic voting. Some of the heads of states include:

Although on amicable terms with other smaller nations such as Liberl, Leman and Remiferia, Crossbell has historically had a complicated relationship with its two neighbouring superpowers: Calvard and Erebonia who both lay claim to it. With both countries exercising a large amount of influence on the state, Calvard was practically powerless to stop corruption and self determine. Remiferia, through its medical businesses , and Leman, though the Epstein Foundation maintain strong presences in the state and have good relations.

Some citizens remarked on the positive changes annexation had brought for the state, but most were for their own independence which was eventually regained following more strife. International relations seem to be improving from the present time onwards.

Crossbell was historically not permitted to have its own standing army, having instead a guardian defence force. This force operated from the two gates on either side of the state and made use of armoured cars.

Crossbell features a large police department consisting of different divisions. The Special Support Section was a special division established to help the the reputation of the force and help on a more public level, in a similar capacity to the Bracer Guild. Ian Grimwood formerly held a practising lawyer firm in the city.

Crossbell was known to be a hive of corruption and illicit activity. Two major criminal syndicates, Revache and Heiyue were known to operate in its borders, as well as the D∴G cult, working to subvert authority and achieve their own ambitions. various other criminals with roots in Erebonia and Calvard could also carry out their schemes with little to fear in the way of persecution because of the political circumstances. This included counterfeit goods salesmen from the republic and conmen from the Empire. this was no longer the case following re-independence, when these types of criminals could face the full might of the law.

Crossbell produces large amounts of honey from the renowned fields of Armorica Village. There is also a significant amount of mining activity in the mainz area.

Crosbell has many attractive destinations for tourists, including the world famous Arc en Ciel Theatre, and accompanying casinos and Mishelam Wonderland- with its resorts, lakeside beach and theme park facilities.

Crossbell is home to the IBC (International Bank of Crossbell) which sees commerce and the flow of money around western Zemuria. The IBC had an enormous amount of financial power, able to cripple the finances of neighbouring countries should they choose to freeze any assets. Other prominent organisations such as the Epstein Foundation and Reinford Group had offices within the IBC.

Other business operating on a local scale include a law office (formerly), bakery, orbal and retail outlets, cafes and restaurants, hotels,

Crossbell is said to be one of the most technologically advanced places on the continent. The Epstein Foundation conducts regular testing in the city, most notably for the Orbal Network Project and testing of their ENIGMA orbments. The orbal stores such as Genten receive the latest technology from all of West Zemuria.

The Transcontinental Railroad crosses through Crossbell horizontally, stopping only at Crossbell Station. Crossbell also has air links via Crossbell Airport. Orbal vehicles are commonplace within the city and a bus service runs around the state.

Through investment and links with Remiferia, St. Ursula Medical College offers care that is acclaimed and sought after internationally. Cutting edge medical research is conducted in the research lab, and esteemed doctors from Remiferia work here alongside a team of nurses.

News in the state is run by the Crossbell News Service and the publication of the Crossbell Times. They have a branch in the harbour district.

Crossbell has large numbers of people from various walks of life and countries due to its location. The vast majority of its population follow the Septian Church and belief in Aidios, however the D∴G cult has its origins in Crosbell and practise an alternative religion.

Crossbell city is sprawling metropolis with many high rise buildings and modern architecture. Some regions like the Downtown District were left behind by this development, but were later addressed under Erebonian Annexation. Styles from the East are also present in the city. Notable landmarks include the Orchis Tower, the largest tower in the world and Mishelam Wonderland.

There are several sites of archaeological importance such as the Sun Fort, Moon Temple and Stargazer's Tower which date back to the middle ages. other smaller sites of interest include the Ancient Battlefield and the Lupinus River Ruin.

The Arc en Ciel theatre is the centrepiece of the Entertainment district, and the skills and performance of its actors is known across Western Zemuria. Nearby the theatre are casinos and hotels. Mishelam wonderland is a source of entertainment with its theme park attractions, resort facilities and retail outlets. The city also features jazz bars, restaurants and cafes.

The famous sculptor, Magnus Hector is from Crossbell, with one of his statues on display in the City Hall.

Darts is played within the city. The Fisherman's Guild and Imperial Fishing Club both maintain a presence in the city, sharing a branch and spreading the joy of fishing.

Crosbell has a few legends about strange moaning sounds heard near the Ancient Battlefield, as well as the legend of St. Ursula and the white wolf.

Scenic photo of the sandbar on Ursula Road