Male
v · e
Daniel （ダニエル）is one of the young orphans who lives at Mercia Orphanage with Matron Theresa.

Daniel is a young boy with curly purple hair and green eyes. He wears a brown and red shirt with a small lime green waistcoat, along with baggy orange pants and a green and white sleeveless jacket. His shoes are thick and brown with green edges.

Daniel is the quiet one out of the orphans. He is happy to go along with what the other suggest.

Daniel is a young orphan who lives at Mercia Orphanage with Matron Theresa and the other orphans. He lost his parents at some unknown point prior to the game.

Daniel is first seen when Estelle and Joshua come to Mercia Orphanage to get Estelle's badge back from Clem. He is watching Clem with Mary. Daniel and Mary ask Kloe about an apple pie which they all eat before playing.

Later that night, as Daniel and the rest are sleeping, Matron Theresa smells a fire and runs in to wake everyone up. Daniel wakes up and follows Matron Theresa and everyone else downstairs in a attempt to escape. However. as they are about to reach the door, the roof collapses and they are trapped inside. Praying for help, a silver-haired stranger comes in and saves them. The stranger then calls for help from the nearby town and when they arrive, they put out the blaze and escort Daniel and the rest to Manoria Village.

Daniel is one of the children seen during Jenis Royal Academy's school festival. He comes along with Matron Theresa and the other kids. After having fun at the school festival, he goes with Matron Theresa and the other kids to watch Estelle, Kloe and Joshua's play. After the play, Daniel goes backstage with everyone to congratulate Estelle, Kloe and Joshua about their play and appears delighted when Dean Collins comes in with a bag of donation money to rebuild the Orphanage with.

Daniel then goes with Carna and the others back to Manoria Village. However, along the way, his group is attacked by bandits who knock out Carna and Theresa and run off with their money. He is unhurt, but stays with the Matron until a passerby comes along and helps them by taking them to Manoria Village. He is then seen crying in Kloe's arms when Kloe and the rest come into the inn worried, after hearing about what happened to them.

After Mayor Dalmore's arrest, Daniel is seen happily playing with the other kids in Manoria Village.

Estelle, Kloe and the party return to the orphanage where they seek out Daniel, who is one of the individuals in the region who has seen the 'white shadow' that is referred to as a ghost. he tells them that he saw it flying off the East. Daniel cries when they leave, as he doesn't want them to go. He also still eagerly looks forward to the gift of pie.

Daniel follows Clem around in the operation to find a gift for Matron Theresia. He comes with Grant in the search to find Mary, eventually finding her on the Gull Seaside Way. They all return to the orphanage and have a party. 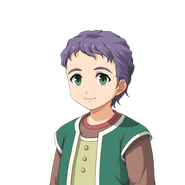 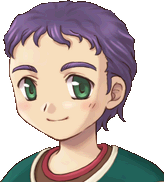 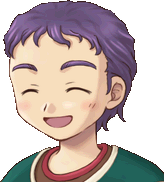 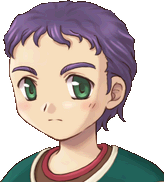 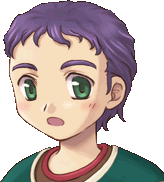