Kiseki Wiki
Register
Don't have an account?
Sign In
Advertisement
in: Stubs, Characters, Trails to Azure Characters,
and 11 more

Time, Space
v · e
Duvalie (デュバリィ), also known as Duvalie the Swift (のデュバリィ) and romanised by Falcom as Dubarry, is the head knight of the Stahlritter.

Although her age is not known, Duvalie is younger than her fellow knights Ines and Ennea. She is a young woman with green eyes and braids in her hair.

While on Stahlritter duties, Duvalie wears their usual armor: a series of silver plates over a form fitting black outfit with a violet skirt emblazoned with the Ouroboros insignia. Her sollerets and jewelled headpiece also feature white feathers.

When not on duties or going incognito, Duvalie goes around with more typical civilian attire, such as a white shirt, green tie, red skirt and knee-high leather boots. She still retains her sword and kiteshield for self-defense.

Due to Duvalie's personality quirks, she is very easy to irritate, intentional or not. In part due to her young age, she dislikes being treated like a child. As a knight, she is extremely devoted to her lord, has a strong sense of justice, and takes pride in her skills. She does not like incompetent fighters, considering Gilbert Stein to be a disgrace and disturbed at the thought he works in the same organization as her.

Duvalie is shown to have an interest in Erebonia's two top swordsmanship schools, Arseid and Vander. She is shown to be interested in and respect particularly powerful individuals, such as Victor S. Arseid, Cassius Bright and Arios MacLaine. Throughout the course of the Cold Steel series, she also develops a rivalry with Victor's daughter, Laura S. Arseid.

Little is known of her past. In S.1183, she was born into a small noble family in a remote region of Zemuria.[2] Her hometown was attacked by brigands[3] in a manner similar to the Hamel Tragedy.[2]

Duvalie was discovered by Arianrhod in S.1198. Duvalie had always admired the legend of the Lance Maiden of the faraway Erebonia.[2] Arianrhod revealed her true identity to Duvalie and patiently trained her. Duvalie eventually gained the title "the Swift" for her fast, yet powerful strikes.[2]

Duvalie was both the youngest and first member of the Stahlritter, who later recruited Ines and Ennea. Ines was a former Bracer, and Ennea was a victim of the D∴G cult.

She looked up to Loewe due to his expert swordsmanship and was shown some techniques by him despite their contradicting swordsmanship. Duvalie is a very powerful swordsman: as Bleublanc once put it, "she may not have a number among the Enforcers [of Ouroboros], but it's most assuredly not for a lack of skill".

Duvalie is introduced as one of the three members of the Stahlritter whom the Special Support Section fights as they ascend the Stargazer's Tower. She only appears briefly. Her actions during this game overlap with her actions during Trails of Cold Steel II; she is working in both Crossbell and Erebonia, while Arianrhod and the Stahlritter are only seen working in Crossbell.

She makes a more proper introduction in the second Cold Steel game. Along with McBurn, Bleublanc and Vita Clotilde, Duvalie is one of the three agents of Ouroboros sent to assist the Noble Alliance during the Phantasmal Blaze Plan. Duvalie first crosses paths with Class VII at Bareahard where she fights alongside McBurn. Duvalie may be knocked down by the party, but McBurn will stop holding back once this happens and defeat the party afterwards.

Aboard the Pantagruel, she later has a chat with Rean Schwarzer. She comments on how because she is not an Enforcer, she does not require the "darkness" that they usually have. She briefly fights Rean in his ogre form alongside Bleublanc.

She is later seen with McBurn at Aurochs Fort, with Helmut Albarea believing that she was there to protect him. When Class VII confronts him for his crime against Celdic, Duvalie watches as McBurn leaves as he has no interest in fighting them, leaving her alone. Duvalie is knocked down, but this is partially because she is tired as this battle takes place during the same day as her battle against the SSS in Ao. After losing, she leaves, disgusted with and unwilling to defend the Duke after his crimes, remarking that her only objective was to watch the fortress fall.

She last appears fighting alongside Bleublanc in the first roadblock at the Infernal Castle. After being pushed back at first, Duvalie awakens her inner power and Class VII seems cornered, but they are saved by the sudden appearance of Olivert Reise Arnor and Toval Randonneur. The two of them take on the Ouroboros members before the rest of Class VII proceeds inward and escape, to Duvalie's frustration.

Alongside the rest of the Stahlritter and some other Ouroboros members, Duvalie is now working for the society's plan to reclaim the Phantasmal Blaze Plan from Giliath Osborne. She first works in the Saint-Arkh region alongside Shirley Orlando on the first Aion experiment. Alongside Shirley, she battles some of Class VII again near Hamel, after all of them pay their respects to the deceased Loewe.

She later participates in the third Aion experiment alongside her fellow Stahlritter members in the Ordis/Juno regions. There, she and the rest of the Stahlritter fight the members of New Class VII, and then later team up with their lord to battle some members of Old Class VII who fight alongside Aurelia Le Guin.

During the final chapter of the game, she does not enter the Gral of Erebos, instead staying outside of it along with the rest of the Stahlritter. Duvalie seemed disturbed to discover that her master intended to bring about the Great Twilight, sought to end the world.

Unsatisfied with the consequences of the plan which sought to end the world, Duvalie opts to search for her own answer and leaves the society, clashing with her fellow knights while helping Rean and Crow escape the Black Workshop. Later, she fights alongside Crow in the First Rivalry against Rean, at the end of which Crow decides to tag along with Rean. Duvalie reluctantly accompanies the group, seeing that she has no way off the island.

She aids Rean in defeating Ines, Ennea, Arianrhod and her Divine Knight in the third of the Spirit Shrines, before witnessing the assassination of her lord at the hands of Rufus Albarea piloting the golden knight, which she is distraught with, but resolves to continue on for her sake. At the end of the game, Duvalie reconciles with Ines and Ennea, tagging alongside Zephyr members Xeno and Leonidas to lead a charge on one of the Salt Pales. She did not return to Ouroboros following the end of the Great Twilight.

In March 15 S.1207, Duvalie heard that Rufus had escaped imprisonment and took over Crossbell as its Supreme Leader. Already enraged at Rufus for the assassination of her lord, Duvalie and the Stahlritter attempted to sneak into the city, but were forced out by Garcia Rossi, Cao Lee and even Arios himself. The three knights then decided to scour the surrounding area for information, temporarily separating.

During her investigation, Duvalie ended up running into the Black Guard and was outmatched, only for Renne to appear with three children and a masked man to defeat them. When the man took his mask off and spoke, Duvalie immediately recognized the man Rufus, becoming incensed at his presence and swiftly attacked him, blaming him for her lord's assasination and calamity he had caused. Rufus offered Duvalie a one-on-one fight to set matters straight, which she accepted. Her fighting spirit matched his skill, but she was defeated and conceded when Rufus used a sneak arts attack. She expected him to kill her, but became bewildered when he spared and then offered her to work with him. Renne explained the situation to her, and she reluctantly decided to assist him for the time being when he offered her a proper rematch if he was successful.

When Ian Grimwood explained the recent events to the group, in which the real Arios had also joined, Duvalie resolved to accompany Rufus to stop the Supreme Leader and the mastermind behind the events. 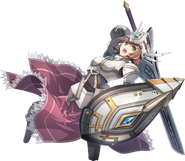 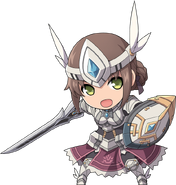 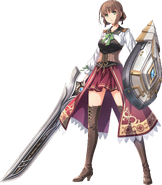 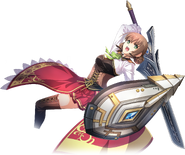 Promotional screenshot with Ines and Ennea

Promotional Screenshot of Duvalie with Arios MacLaine and C. 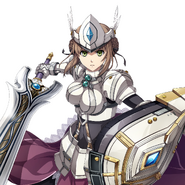 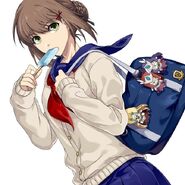 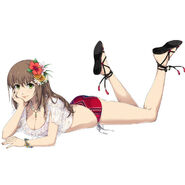 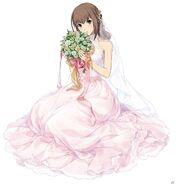