Edel is a young woman with long greenish blonde hair and violet eyes. During her time as a student of Thors, Edel wore the nobles' uniform consisting of a white and gold blazer with padded sleeves, a white skirt, lavender shirt, purple tie, black tights and a purple bow. Edel also wore a large sun hat and a red ribbon in her hair.

After graduation, Edel wears a long pencil skirt in beige with white frills, a padded white dress shirt with a black vest over the top. She still has a large sun hat, but it now has a pale green ribbon with a purple flower in it.

Eddel is soft-spoken and kind-hearted. She cares greatly for all living things and avoids violence where ever possible. She can be very undeterred, using passive aggression instead of anger, such as when she easily deduces between Vivi and Linde. her greatest desire is to bring smiles to the faces of everyone in Erebonia by filling the country with flowers. She is unexpectedly one of the most formidable drinkers in Erebonia.

She serves as the head of the Gardening Club during her years at the academy, always wearing her signature straw hat. She is almost always found looking after the gardens or plants. She establishes a good relationship with Fie, teaching her how to grow and care for plants. the produce grown is later sold at the Thors Academy Festival.

During the October War, Edel remained at the academy, and defended it by joining the Order of the Lion. She uses an orbal staff in combat. After she joins the Courageous II, she offers advanced arts training.

After graduating, she aimed to start up a nature conservation society to fill the country with flowers.

Edel is encountered by Fie and New Class VII when they visit the Noce rest lodge, where Edel is the manager. She took up the position as an administrator both as a hobby and to study. She is self-teaching herself cooking, and can be given unexpected cooking results. She knows people from all sorts of backgrounds and walks of life from this position, and uses this intel to help her fellow Thors graduates. She uses her land to help grow food for those in need.

Edel comes to the aid of Class VII in the waterways below Ordis. She also takes part in a radio drama, taking the part of Selma as she helps out on the Courageous II. In the Overture in Mishelam Wonderland, Edel is invited to take part in a drinking contest, where she matches strong contenders like Aurelia Le Guin and Sharon Kreuger drink for drink until the alcohol runs out. In the final conflict, Edel's role is to make sure the food supplies are properly balanced and sent to each home.

Edel is at Angelica Rogner's upperclassmen reunion. She also helps out behind the scenes with gathering intelligence (speaking to Vivi) and with supplies and logistics in the final battle.

Edel as a student 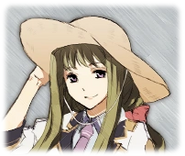