Sabre
v · e
Ein Selnate (アイン・セルナート), also known under her alias as Carnelia (), is the Grand Master of the Gralsritter of the Septian Church. She occupies the seat of First Dominion.

The eponymous character of the Carnelia book series is modelled after her.

Ein is a tall woman with greenish-blonde wavy hair and scarlet eyes. Although she wears the normal habit of a Septian Church sister in The Ring of Judgment, she normally wears a unique variation of the Gralsritter uniform consisting of a black long sleeved top with a leather underbust, a long skirt like attachment with crossed belts and fleur-de-lis resembling patterns, a white high-necked collar with a crimson cloak attached and a golden medallion with the symbol of the Church.

Ein is fiercely stern, confident in her position of authority and commands a degree of respect and fear by those who know her. Despite this, Ein can also be surprisingly flippant and humorous at times. She playfully teases Kevin Graham, calling him a "dog of the church" after he becomes a knight. Later, after he asks to take on a new title as a Dominion, she warns him that he needs to consult with Rufina on the new title, lest she give him a new title instead that he dislikes.

Ein Selnate is the Grand Master of the Gralsritter, commander of the twelve Dominion and the thousands of Knights and Squires.

Ein was originally supported by Knight Rufina Argent, whom she considered one of her closest friends. After Rufina's death and the manifestation of Squire Kevin Graham's Stigma, she was asked to recruit Kevin into the Dominion. It is not known whether a new Knight joined Ein as a supporter.

When the Stigma of Wazy Hemisphere awakened, she escorted him back to Abbas. She also trained Ries Argent in using the Templar sword, even though Ein is seen with a sabre promotional artwork. She also encouraged Toval Randonneur to become a bracer when he had problems finding his place in the world during an incident that was later loosely adapted into the Carnelia book series by Micht.

In late S.1203, she contacted Kevin Graham after he retrieved the Fool's Locket artifact from Hermann Conrad to ask him to investigate a possible artifact found in Valleria Lake and held in the Primal Ground underneath Grancel Cathedral. She mentioned that a Squire, who turned out to be his childhood friend Ries Argent, had been assigned to him as a support.

When reporting to her the outcomes of the ordeal in Phantasma, Kevin requests a new title. Ein laughs and states that such a thing has rarely happened in the history of the Dominion, but accepts. She earnestly requests that he ask Ries to help him choose however.

After the Phantasma incident, Ein rang the Bracer Guild in Alster, Erebonia and asked for Toval Randonneur, who was surprised she knew he was there. Ein asked him to retrieve an artifact that was likely in the possession of the remaining members of the Jesters. Claiming her people were busy but that she filed an urgent request among her knights, she would reward him with information on Renne in return.

Toval retrieved the artifact with the help of Estelle and Joshua Bright. Keeping her end of the deal, Ein told them that Renne had not returned to Ouroboros and had instead gone to Crossbell. Estelle's satisfaction with that answer surprised her, after which Ein questioned why they were looking for Renne. Ein was surprised that they told her, the Grand Master of the Gralsritter, that they wanted to add an Enforcer to their family.

After Estelle and Joshua set out for Crossbell, Ein and Toval sat down with the granddaughter of the mayor, Tilia. To spare Tilia's already poor eyesight, Ein offered to read her a chapter from Carnelia. She also donated money for the treatment of Tilia's eye under the guise of a present from Aidios, which Toval presented to Tilia's brother Kai. While Ein and Toval argued over the financial administrator, Tilia suddenly realised that the eponymous 'Carnelia' and 'Toby' were modelled after Ein and Toval.

Ein is present at the Imperial Wedding.

Ein is present at the gathering of Dominion in the New Year in Arteria. 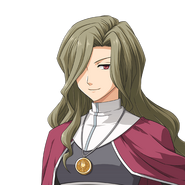 Ein Selnate inviting Kevin Graham to take the seat of Fifth Dominion after the death of Rufina Argent.

Abbas and Ein Selnate after the manifestation of Wazy Hemisphere's Stigma. 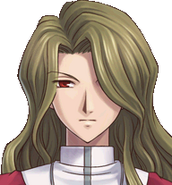 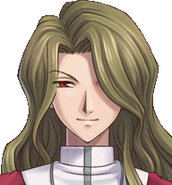 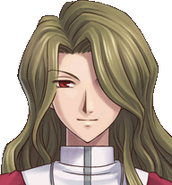 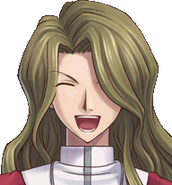 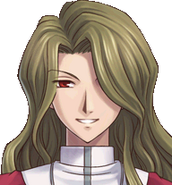 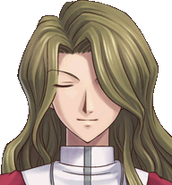 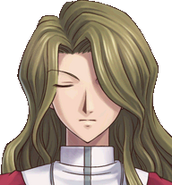 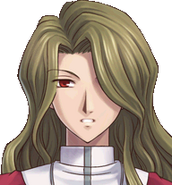