With abilities second to only the Ebon Knight, El-Prado is considered the strongest of the other six Divine Knights alongside the Argent Knight.[1] Throughout Erebonia's history, the Auric and Argent have won more battles against other Divine Knights than any of the others.[1]

El-Prado possesses the ability to generate a golden force field around itself, strong enough to effortlessly block attacks even as formidable as the arts of Roselia, the Elder of the Hexen Clan. It also seems to be competent at stealth; it was able to cloak itself and teleport, as shown when it suddenly appeared out of seeming thin air right behind the Argent Knight, and without even having its presence detected by any of those present.

El-Prado is the last Divine Knight to be awakened, not doing so until the Great Twilight was already in effect. It was sealed in the Marshlands of Crossbell, which had become a candidate site upon the state's annexation by the Empire. Its trial was completed by Awakener Rufus Albarea, who muses that one of the major reasons he took the position of Governor General in the first place was to monopolize this possibility. Rufus deploys his guard en-masse to the swamps combing the area for signs of the trial ground becoming active, eventually succeeding.

Even immediately after its awakening, El-Prado demonstrated its overwhelming strength and Rufus competence at piloting it, defeating several of Class VII's Soldats. While under Rufus's command, El-Prado makes use of a scaled up version the Holy Sword of Ishnard, one of a pair of swords handed down by the Albarea family that was once used to fight Nosferatu.

Rufus later took El-Prado to the Stella Sanctuary, where El-Prado absorbed Argreion's powers at the end of the Third Rivalry, having stabbed it from behind; it did not participate in the fight. Because of how its pilot Arianrhod was an Immortal, the absorption of Argreion directly caused her death. Later, Rufus lost the Fifth Rivalry against Rean Schwarzer's Valimar, Crow Armbrust's Ordine, and the Soldats of New Class VII at Tuatha De Danann, causing El-Prado to be absorbed by Valimar.

With the conclusion of the Rivalries, and the defeat of Ishmelga, the remaining Divine Knights gather one last time before disappearing from the plane. They activated the Sacrament Programs of the Sept-Terrions of Fire and Earth at the behest of their Kins' respective leaders (Roselia of the Hexen Clan and Black Alberich of the Gnomes), using said Programs' divine domains (souls for Fire, bodies for Earth) to restore Crow and Millium Orion to life. Upon this act, the Divine Knights leave the plane for good.

El-Prado is able to manifest his power inside of Rufus's Zauber Soldat unit when the manifestation of the Great One due to Elysium's interference makes it possible for it to crossover from the Beyond. This is but a temporary phenomena, but this timely intervention allows the heroes to gain the edge and buy enough time for victory to be obtained. 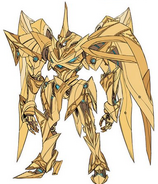