Kiseki Wiki
Register
Don't have an account?
Sign In
Advertisement
in: Characters, Trails into Reverie Characters, Kuro no Kiseki Characters,
and 3 more

Cruciform Sword
v · e
Elaine Auclair (エレイン・オークレール), also known as the Sword Maiden (), is an A-rank bracer affiliated with the branches in Calvard.[1].

Elaine is a young woman with long platinum blonde hair, some of which is tied back into braids. She wears a green bust dress with long tails, short white shirt sleeves attached to a collar, and black thigh-high stockings with white high-heeled boots. She also wears silver wrist guards with white gloves and carries a silver cruciform sword kept in a blue scabbard. Elaine wears a white handbag over her shoulder with a golden cross buckle.

Elaine has enough humility to decide she isn't yet worthy of A rank within the Bracer Guild. She doesn't like making things hard for other people but also doesn't like to be in the spotlight. As such she maintains a serious and dedicated personality to her profession as a Bracer, ignoring the attention and fanfare around her. Elaine is nostalgic about the old days when she hung around with her two friends that now have gone separate paths. Elaine is, for the most part, devoted to doing things the lawful way, but will skirt along the grey if it is necessary for her aims. She will get extremely antagonistic should someone make comments about her age.

Elaine is the daughter of Edmond Auclair, the CEO of the Quincy Company and a descendent of the Marquis Auclair. She grew up in Oración and made strong childhood friendships with the son of a businessman, Rene Kincaid and orphan Van Arkride. The three were fast friends with Elaine introducing Van to sweets, something that would become his lifelong passion. Rene, as the eldest, looked out for the other two. Van was then adopted and Elaine suspected her father, who had never approved of Van, had had a hand in Van's disappearance and subsequent trauma that would haunt him for the majority of his early life.

Van would return one day and they all attended Aramis High School together. Elaine developed feelings for Van, with the two becoming an item after subtle manipulation from Rene. After Rene left the position of student council president, Elaine as the vice-president was the favorite to take over the position with Van in the vice chair. Van gave the endorsement speech that got Elaine elected, citing stories about how she beat up delinquent or exposes scandalous traders, making the student terrified of her. After her election, Van disappeared once again from their lives.

Elaine still had heavy suspicions about her father, not just about van but about other illicit activities he may have been involved it. She distanced herself from the family and, in search of a way to bring justice, took up a position with the Bracer Guild after graduating from high school. She was quick to earn a name for herself and amassed a fanbase. She received offers to star in a movie and model for a magazine and received the title of 'Sword Maiden'.

In March S.1207, she received the proposal to promote her to A-rank through her senior Zin Vathek from the guild's headquarters in Leman, breaking Sara Valestein's record as youngest to achieve that rank.[Note 1].[1] She turned down the offer, arguing she has neither the strength nor the achievements to be worthy to become A-rank.[1]

In August S.1207, Elaine was assigned to a guild request to locate two ten-year-old siblings who left home and never returned. After reaching an impasse, she succeeded in locating the kidnappers the following month thanks to intelligence obtained to a childhood friend working for CID. The mafia responsible turned out to be a subcontractor for "A". When Elaine reached its leader, he and his subordinates were brutally murdered by their superior, wielding a cruciform blade. After a short duel, he teleported away and Elaine managed to bring home the children safely. The sight of death and the superior's massive strength shook Elaine significantly, resulting in her accepting her promotion to an A-Rank bracer.[1]

Elaine continues to work for the Calvard branches of the Bracer Guild, primarily stationed in Edith but often called to assist in other branches. At this time, the increased activity of the Almata is leading to increased workloads and the bracer guild is often overworked, with members frequently being called out to other cities. Elaine is conscious of Van's return to the city but until the events of the story has been unable to meet him in person. she heard rumours of the places he frequents, such as Bermotti's bar but doesn't encounter him until patrolling with other Bracers Zin Vathek and Alvis. Elaine expresses her disapproval of Van's career and involvement with Agnes Claudel in his work.

Van would continue to run into Elaine throughout his time in Edith, with the two exchanging a few words here and then, leaving many things unsaid. This would include Van buying her her favourite drink, a vanilla cocoa and Van meeting her at orbal film screenings. She focuses primarily on her work as a bracer, sometimes to the degree that others think she might be pushing herself too hard.

Elaine is present in Langport assisting the bracers when Almata increase their activity there and a large scale conflict threatens to erupt between Heiyue and Almata. Elaine independently reaches many of the conclusions that Van and the Arkride Solutions Office reach and the two collaborate to share information, despite not approving of each others' ways. Elaine accompanies the party to the Hei Long Stronghold and hold off Melchior, while looking after Maxim Rogan and the women he brought with him.

When Almata threatens Oración, Elaine travels to her home town for the first time in years as part of the bracer guild's forces. She continues to avoid her father and family, but knows that she will confront him soon as her investigations heavily suggest a link between Almata and her father. She, Zin and Fie Claussell form the underground investigation team for Almata's death game. Elaine helps bring down the Doole Family forces whilst in the city.

Should Van side with the Bracer guild, Elaine would team up them only briefly before disappearing on the second day. Elaine will acknowledge that Van has grown and willing team up. Should Van choose any other allies, he will instead face Elaine along with the Bracer Guild, and she will accept the result after being defeated but likewise disappear the following day. Elaine encounters Melchior and offers him a 'deal' to make the game more exciting, and she forms the 20th team, taking the access point and card intended for the team Van joined forces with. Elaine would continue to participate in the death game and face off against Arioch, tracking him down and claiming his access keys. She lost the fight and had to retreats, but snagged the keys in the process. Van would face Elaine in single combat for the last remaining keys, but is defeated and leaves the rest to him. her deal completed, Elaine gets the information she needs from Melchior.

Elaine resigns from the Guild and goes after one of the main sponsors of Almata, which she has now verified after all these years- her father, Edmond. Asherrad is also after Edmond, branding him a heretic but is content with leaving his retribution to Elaine when they confront him in his office. Elaine explains everything she knows to her father and calls him out on all his misdeeds, to which her father pleads against. Elaine prepares to hand him over when Arioch and Melchior appear, intending to dispose of the loose end Edmond. Edmond apologises for his foolishness but Van intercepts an attack at the last moment and saves him from critical injury. Elaine arrests her father. She apologises for not being able to assist in the final phase, having to answer questions, but she wishes them well.

Having been dissuaded form leaving the bracer guild, Elaine continues her work with them in Edith. She relentlessly starts pursuing the remnants of Almata and confronts them and monsters in the underground. That night, Elaine and Van catch up on the roof top and talk about the past. Van encounters her on Revolution Day travelling with Celis Ortesia and Rixia Mao and the two reminiscence about the past.

Elaine is separated from her companions when Pandemonium envelops the city, having head off once getting Melchior's message. She comes to the party's aid in the Vantaille District, disposing of one of the Seventy-Seven Devils quickly and helping to break the Diabolos Pillars. Elaine is prevented from joining the party in breaching Genesis Tower. She likewise tries to join the party in retrieving Van from the Infinite Boundary but a similar barrier prevents her.

In the New Year, Van, Elaine and Rene meet up for drinks.

Elaine acts separately from the Bracer Guild to come to the Arkride Solutions office for an unknown purpose.

Elaine Auclair in Trails into Reverie, Episode: "Beyond the Reverie, And the Sword Maiden Moves On" 創まりの先へ, そして、乙女は剣を手に進み続ける 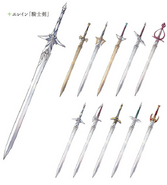