Water, Time
v · e
Elise Schwarzer (エリゼ・シュヴァルツァー) is a student at St. Astraia Girls' School. She is the adoptive sister of Rean Schwarzer.

Elise is a young woman with long straight black hair and turquoise eyes.

When she is not wearing her white and black St Astraia uniform, a younger Elise wears a dove grey and lilac dress with a purple underbust and cravat with a blue broach. She also wears black tights and pale pink heeled shoes resembling ballet slippers. She wears a pink hairband with ribbons trailing off in her hair.

An older Elise wears a darker blue and white colour scheme, with a corset and skirt dress with a tall collar, white boots over her tights and long white sleeves which open up to a more loose pale blue shirt underneath. She now has a blue ribbon bow around her collar, and a blue pin in her hair above the ear.

She is a well-mannered young lady who seeks to better herself. While aware of her social standing, she treats everybody like they are equals and cares deeply about people.

She worries greatly about her adoptive older brother and it is implied by Alfin that Elise has a crush on him. When this is brought up by anyone, she becomes extremely flustered, but can also at times seem dejected when she feels like she cannot get her feelings through to her brother. She is also friends with Princess Alfin, even though Alfin's teasing and pranks do tend to get on her nerves. She seems to be familiar with Musse Egret, one of her brother's students at Thors Branch Campus.

Elise Schwarzer is the daughter of Teo Schwarzer and Lucia Schwarzer.

When Elise was younger, she and her brother Rean were attacked by a monster in the Ymir Valley. In that desperate situation, an unknown power overwhelmed Rean and he viciously murdered the monster. After the incident, Elise noticed that her brother had started to distance himself from the family, and so she sought to train herself to become stronger.

In S.1203, Elise left to attend St. Astraia Girls' School in Heimdallr. Although she had other reasons, such as preparing for her debut into high society, her main reason for attending St. Astraia was to free Rean from the guilt he felt over the monster attack.

Elise visits her brother at the academy, trying to convey her feelings about Rean not having to feel guilty about what happened in the past, but gets frustrated when he doesn't seem to take heed and hasn't visited her despite being only 30 minutes away. During one evening, she is led into the Old Schoolhouse by Celine Millstein and nearly falls to an attack by Ol-Gadia, a prototype Magic Knight that was activated from behind a trial door when a potential awakener was identified. Patrick T. Hyarms, Crow Armbrust and Rean act quickly to save her.

Elise is later met again when Class VII are invited to St. Astraia Girls' School to meet a special guest- Olivert Reise Arnor. She prepares tea for them all, having been told to expect nine, but she had no idea it would be Rean and his classmates. Alfin Reise Arnor is also introduced, the best friend of Elise who has been told much about her brother and friends.

Elise and Toval Randonneur locate Rean in the Eisengard Range following his month long absence, and help him take down a Magic Knight. They escort him back to Ymir where She remains. Alfin is also present there, in hiding from the Noble Alliance. During an attack on the village by jaegers hired by Helmut Albarea, Vita Clotilde appears and apologises for thier actions, memory wiping them and sending them away, but also distracting everyone long enough for Altina Orion to swoop in abduct both Elise and Alfin.

Elise is not seen for quite some time, and is not rescued until Rean and his allies liberate the Karel Imperial Villa where she is being held. from thereon, she joins the efforts against the Noble Alliance by helping onboard the Courageous.

She and Alfin later visit Thors Military Academy once again and lend their aid to solving the activation of the shadow trial at the Old Schoolhouse. She is once again acquainted with Patrick, but Rean is staunchly defensive of her.

After the Erebonian Civil War, Elise graduated into the senior high school of St. Astraia Girls' School and was elected student council president. The close distance between Leeves and Heimdallr allows her to stay in touch with her adoptive brother. She also continued to support her best friend, Alfin Reise Arnor.

She visits her brother, now working as an instructor at the Thors Branch Campus, in Leeves. She turned down his proposal to show her around town and offers to clean up his messy bedroom instead.

Elise accompanies the Princess to Crossbell for the Imperial Inspection on board the Pantagruel. There she sees Musse Egret and recognises her from St Astraia. At the dinner party for the inspection, she takes a moment to confront Musse about what she was doing, until Rean catches them and ends the conversation. Elise and Alfin try to help out when Ouroboros appear mysteriously by putting on disguises and intending to sneak out, but Rean talks them out of it.

Elise is present at the Heimdallr summer fair where she is organising a charity sale in the Sankt district. When the Gral of Erebos is summoned, Elise takes shelter in the School, with Patrick acting as their defense.

Elise has taken prisoner once again following the outbreak of the Great Twilight, and is held in Leeves. The students and some of the faculty of Thors Military Academy, in conjunction with G. Schmidt and Michael Irving are keeping her and Tio Plato secure in the Einhel Keep. Expecting a rescue, they fortify the Thors Branch Campus until Rean and his party arrive and defeat them, liberating the captives. It turns out they were unsure about the direction they were being asked to follow, and used the operation to test their resolve.

Now with Elise at the orbal terminals, Elise and Rean contact their parents in Ymir to discuss the truth about Rean's body and what happened in S.1192. Elise is brought onboard the Pantagruel and has lots of conversations with various visiting dignitaries, including Lucy Seiland and being hounded by Grace Lynn. She is present on the bridge when the Glorious attacks and despairs at the thought of Musse becoming a sacrifice too.

Rean speaks with Patrick and Elise on the bow of the Courageous; Patrick notes Rean is strangely calm about seeing them together. Elise is helpful at various spots around the Empire, including helping to mediate a conflict between Shirley Orlando and Leonora, by helping smooth out the unrest in Alster, and by helping sort out Gilbert Stein's operation in Eryn Village.

In the final battle, Elise helps out by operating an orbal terminal on the Courageous II and providing remote orders. She attends the Imperial Wedding.

Elise offers her assistance in the capital when Rean is investigating the whereabouts of the missing prince and his wife. he initially refuses her help on the grounds of danger, but she wins him over by stating it is her duty as the friend of the sister of the prince and that she no longer needs protection as she has been practising the Schwarzer style of swordsmanship and has been trained by Aurier Vander. It is also later revealed that she has had training from Yun Ka-fai for a brief time. She helps them dispel a ghost beneath the museum and investigate and question various people around the city, eventually tracking down <C>'s party and facing them in the cemetery.

Elise is present in the final battle against Elysium at Reverse Babel. 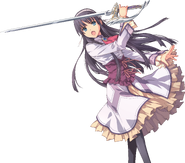 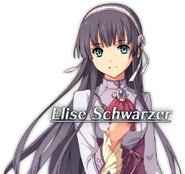 Memories - Rean and Elise being attacked by a monster 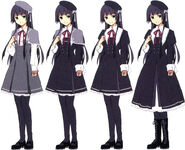 A promotional screenshot of Alfin with Elise and Olivier.

A promotional screenshot of Alfin with Elise. 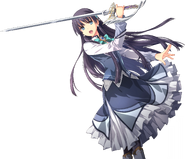 swimsuit in Trails into Reverie 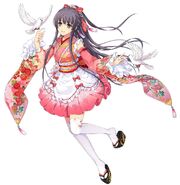