Orbal Staff
v · e
Elliot Craig (エリオット・クレイグ) is the son of the famous Imperial Army officer Craig the Red. He is introduced as a member of Thors Military Academy's Class VII.

Elliot is a young man with a youthful appearance. He has bright red hair and turquoise eyes.

In the October War, Elliot uses much baggier clothing: cobalt blue coverings over his trousers with a chequered pattern, a forest green waist coat, leather skirt attachment as a mustard yellow hooded coat.

In his older appearance, Elliot grows his hair out into a ponytail. He wears a long sleeved white shirt with a red cord tie around his neck and a yellow waistcoat. He now wears teal leggings with black knee high socks, and leather boots and gloves.

Elliot uses an orbal staff in battle. It has two lime green protrusions near the amber orbment and a longer green blade-like attachment at the top resembling a fan. The staff can shift into a violin by shortening the pole.

Although shy and timid, Elliot is capable of mustering an enormous amount of courage in the face of incredible adversity, as he stood by classmates on numerous occasions, against enemies such as the Imperial Liberation Front. His soft personality and looks form a striking contrast to his bold father. He is a firm believer in the power of music and the healing power it brings.

His mother Liana, a beloved piano teacher, passed away when he was 9 years old. To follow in her footsteps, Elliot and his sister Fiona aspired to pursue a career in music.

Elliot's desire to follow in his mother's footsteps was put to a temporary halt after his father refused to give approval. Olaf believed that it was not appropriate for an Erebonian man to pursue a career in music, and that he should instead join the military with him.

Since Elliot was stopped in his tracks by his father's opinion, Elliot gave up on attending music school. As a way of meeting halfway with his father, Elliot signed up for the Thors Military Academy, which had military courses and allowed him to sign up for the Wind Orchestra as a school club activity. Elliot was chosen to become part of Class VII, and was also one of two individuals chosen for a beta test of an orbal staff from the Epstein Foundation. Elliot is one of Rean Schwarzers first friends, teaming up with him on the 1F of the Old Schoolhouse.

During the Heimdallr field study, Elliot confides to his classmates that it had been a personal goal of his to pursue a career in music. He was deeply frustrated in not being able to go to the Music Academy in Heimdallr, but eventually came to accept the outcome of events. Like Alisa Reinford, he does not have any regrets with coming to Thors Military Academy, as he feels that being with Class VII has done more for him than anything else in his life. Elliot also introduces his sister, Fiona Craig, at their house in Heimdallr.

Elliot took a key role in organising Class VII's musical performance at the end of the school year.

Elliot is one of the first classmates Rean reunites with following his month-long absence and the outbreak of the October War. Elliot, Machias and Fie are active in the Celdic region, running a resistance operation from a local windmill. When Celdic is burnt down later during the war, Elliot spearheads the efforts to put on a charity concert in aid of the victims, enlisting several musicians from Eastern Erebonia.

Elliot is a loyal party member for the rest of the conflict, joining the party in the liberation of Trista and the assault on the Infernal Castle.

Although Elliot proactively participated in student life and joined the rest of Class VII in field studies, he never came to terms with the decision to enroll at a military academy and before long, he made up his mind to choose a career in music once again.

Following his graduation from the Thors Military Academy in S.1205, Elliot enrolls at the Music Academy at Heimdallr. He graduates the following year and becomes a professional musician who travels across Erebonia. Elliot also works as a music teacher for children. Elliot also starts to make a name for himself during this time. Rean recognises his playing when he and the new Class VII visit Saint-Arkh and pass the Cathedral. Elliot introduces himself and later comes to the aid of the Derfflinger when Ouroboros attack it. He then participates into an investigation of their activities and helps track them down to Hamel.

During the summer festival, Elliot travels the capital with Mint. Elliot is present at Class VII's reunion in Heimdallr, the operation to track down Calvardian agents as well as the mission to vanquish the dark dragon, Zoro-Agruga. During the summoning of the Gral of Erebos, he helped defend the city and then joined his friends and allies in an assault on the Gral. Elliot stays behind on the penultimate tier to support Jusis and Machias against the Ironbloods with his arts.

After the Great Twilight begins, Elliot searches for ways to lead people to peace with the healing power of music while supporting New Class VII in their activities. he is part of an effort to locate Rean by placing magical stakes across the Empire, eventually finding his location in the Black Workshop which they storm and rescue him from. Elliot is also present at the battle on board the Pantagruel when the Glorious attacks.

There is also an occasion where Elliot is involved in getting through to some of his older friends who have been consumed by the curse and jealousy, with the result of their music firing up people for war. Elliot helps them come to peace with their music and stops the negative effect. Elliot supervised the music for a Arc en Ciel performance that was intended to be a distraction for the forces occupying Crossbell, giving Rean enough time to get a party into the Orchis Tower and take out the barrier generator preventing him from accessing the Stella Shrine and the next Rivalry.

Elliot spends the last night before the Great War in Mishelam where he plays a few performances, and helps his sister pick an accessory for Neithardt. The next day he takes part in the final battle at the Tuatha De Danann. Elliot plays at the Imperial Wedding.

Elliot takes up a role in St. Astraia Girls' School as a music teacher. During his time there, he helps out in a case involving one of the Seventy-Seven Devils causing students to fall into comas when using an artifact.

It is in Heimdallr that Rean reunites with him in his mission to track down the whereabouts of missing Olivert Reise Arnor and Scherazard Harvey. Elliot had been playing in a performance with his old friends, and pass on the information he has about some elements of the military acting strange. he joins the investigation, eventually tracking down some rebels into the sewers where a new unit Gospel R temporarily disables his staff. Elliot also witnesses the new C's true identity in the Himmel Cemetery.

Elliot is present in the party for the final battle against Elysium at Reverse Babel. 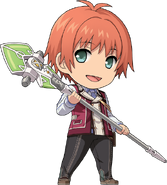 Memories - Olaf getting Elliot to enroll at Thors 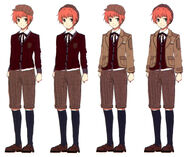 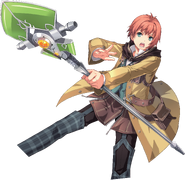 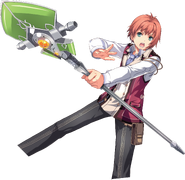 A screenshot of Elliot playing his violin 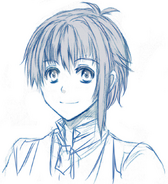 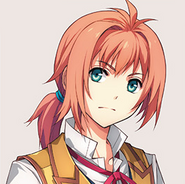 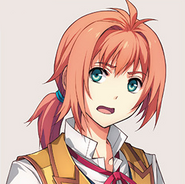 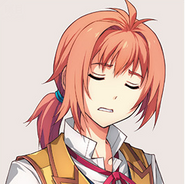 Promotional Screenshot of Elliot with Rean Schwarzer and Elise Schwarzer.

Promotional Screenshot of Elliot with Ash Carbide and Elise Schwarzer.