Elnan is the receptionist at the Grancel Bracer Guild. He has apparently worked there for a long time.

In S.1202, Elnan helped planned the rescue operations to save the Queen and Princess Klaudia.

Elnan is a well-mannered gentleman. Judging by his appearance, he is apparently from a high-ranking family.

Character History (In the Games)

In Trails in the Sky FC, Elnan is the NPC character that Estelle and Joshua Bright interact with during Chapter 4: Turmoil in the Royal Capital.

He registers the two of them when they first arrive at the Grancel Branch of the Bracer Guild and after they tell him their circumstances and Professor Russell's request, he agrees to help them. Elnan furthers tells them to give him some time to think about it.

In Trails in the Sky SC, Elnan is the NPC character that Estelle interacts with during Chapter 1: Sneaking Shadows.

Elnan is first spotted when Estelle Bright and Anelace Elfead arrive back at the Bracer Guild from their Training Program to report to Elnan about the results of their training. Elnan gives them their Bracer points and compliments them on how much stronger they've gotten and how different they seem than before. The two of them cheerfully agree.

When Elnan asks about Carna, Estelle affirms that Kurt and others had stayed behind at Le Locle because Carna and Grant had wanted to do some high-level training and tells him they won't be back for a while. Elnan expresses his disappointment and Anelace explains to Estelle that what Elnan meant is that the guild is down 3 Bracers now, so they're are going to have to do the brunt of the work.

Anelace then asks Estelle about her father and Estelle confirms that he is still going to be working for the Military for a while and that he is currently stationed at Leiston Fortress. Elnan then states that Cassius has been promoted to Brigadier General and is now the head of the army. He then furthers explains that General Morgan has basically retired which causes Estelle to express grim feelings of doom for the army. Anelace also expresses her disappointment at losing another one of the Bracer's power players.

Elnan further informs them that they'll be receiving help from the military so it won't be that bad, but at the same time, they'll also have new threats to deal with as well. Estelle correctly assumes that it's Ouroboros and Elnan confirms it before informing the two of Ouroboros' recent actions and the strange events that have been happening over the last two months e.g. new monsters, strange phenomena etc. He then informs the new of a response that they've come up with.

Suddenly a voice comes from the front door and Scherazard Harvey and Agate Crosner walk in. Scherazard and Agate welcome the two back, and Agate explains that he heard about Joshua from Cassius. He expresses his condolences, but states that he's happy that she's back to normal now. Estelle thanks him and then asks why they are both here. After some banter, Elnan explains that they are here for a special mission: to investigate Ouroboros. Confused, Estelle and Anelace show their concern, but Agate explains that they are just walking around Liberl and trying to get some information at this point.

Slightly disappointed, Estelle laments that it is not going to be easy, before turning to Elnan and asking if this mission that he wants them on. Elnan states that it is and that he wants one of them to go with either Schera or Agate to their allocated specific area. Elnan then asks if they still want to go and Estelle and Anelace cheerfully agree. Elnan thanks the two of them and Anelace decides that Estelle should choose the pairings. Schera compliments Anelace and Agate agrees, they then explain their different fighting styles to Estelle.

After the decision-making is done, they then decide on how they will travel based on Elnan's recommendation. Elnan recommends that they go to the busiest branches which are Ruan and Rolent. Estelle expresses her excitement at meeting everyone in Ruan again and Elnan states that he call the branches, so that they know that they are coming.

In Akatsuki no Kiseki Chapter 1, Elnan requests help from the Crossbell Bracer Guild with regards to Queen Alicia's Birthday Celebration. In response, the guild send Chloe Barnett and Nacht Weiss to help him.

Meeting them, Elnan soon puts them to work with requests. 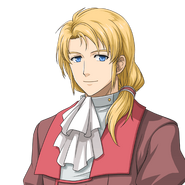 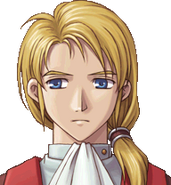 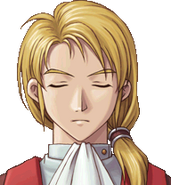 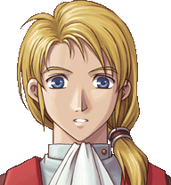 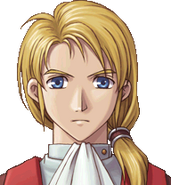 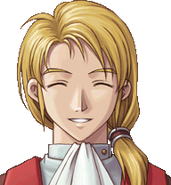 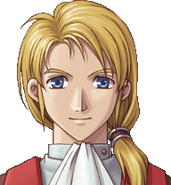 Portrait
Add a photo to this gallery
Retrieved from "https://kiseki.fandom.com/wiki/Elnan?oldid=49688"
Community content is available under CC-BY-SA unless otherwise noted.