Emma is a young woman with plum-coloured hair, which is worn is a long braid and mint blue eyes. Emma wears large round glasses, which she does not actually need.

As a student of Thors, Emma wore the Class VII uniform consisting of a red blazer with a purple bow on the back and around her collar, green pleated skirt and black thigh high stockings with brown shoes.

On her travels during the October War, Emma wore a black and purple corset with detached black sleeves, long tails which acted like a dress, with a white skirt, brown laced-up boots and a short white shawl around her shoulders.

Emma uses an orbal staff in combat, consisting of a large silver rod with a golden moon type attachment at the top with a round orbment installed. At one point, she uses the elder's staff, which glows purple when in her possession.

Emma is a very compassionate person. She carries herself in a quiet, yet polite and courteous demeanor, which makes her very well liked among the other students. She generally follows her tasks without much question and rarely, if ever, disregards them. Despite this, she is equally pragmatic as well as secretive.

Emma remains modest in most of her interactions with her classmates. She acknowledges Machias' one-sided academic rivalry with dismissal and kindness, and she also tutors Fie to help her with paying attention in class and getting better grades.

During the events of Trails of Cold Steel II, Emma spends most of the game grappling over her duty as a witch of the Hexen Clan, and the guilt she feels for keeping it a secret from the others. She displays a noticeable inferiority complex, developed by being in the shadow of Vita, who she regarded as a sister figure to her.

Emma was born in Eryn, the hidden village of the Hexen Clan in Isthmia Great Forest, Erebonia.

Emma's mother is Isola Millstein. Emma did not get know her father, as he had died shortly after she was born. She spent time with both her mother and Vita, the latter of whom she saw as a sister figure. Isola eventually left Eryn to investigate a sudden change in the Empire's mana, leaving Emma in Roselia's care.

After her mother's death, Roselia acted as a surrogate grandparent for Emma. Roselia created Celine to serve as Emma's familiar.

In S.1204, she starts studying at Thors Military Academy, where her academic disposition quickly resulted in her becoming the class president. She joins the Literature club and remains a faithful friend to Fie Claussell. As a member of the Hexen Clan, it is her duty to guide the Awakener of the Ashen Knight, Rean Schwarzer, and this is actually her true purpose for enrolling at the Academy. Celine accompanies her, undercover as a normal cat.

Emma initially does well to disguise her abilities and heritage, but is first forced to use them in front of her friends discreetly to unlock a waterway in Bareahard. She is also on the lookout for Vita Clotilde, a fellow witch for abandoned the village, but an enchantment had the effect of forcing her to just miss every encounter until Vita reveals herself towards the climax. By the end of the exploration of the Old Schoolhouse and the discovery of Valimar, Emma's identity has been revealed.

Emma is amongst the last of the classmates to be reunited with Rean following their separation and occupation of Trista. She is met with Laura S. Arseid in Lohengrin Castle where they are fighting to dispel a Cryptid. Although they succeed initially, a second one manifests and Rean must intervene to save them. Emma proceeds to join up with Rean and for most of the war, provides a spiritual perspective on events that take place, including reporting on the actions of Vita. It is Emma who teleports Class VII onto the Pantagruel to rescue Rean--something that becomes one of her most frequent contributions.

At the Infernal Castle, Emma makes comments about McBurn's abilities and sword, but is quickly told to be quiet. She resolves to make Vita come clean of her actions and bring her back to village. During the climatic battle, Vita and Emma work together to shield the party from the soul-draining aura of the Vermillion Apocalypse. Her magic is not enough to revive the fallen Crow.

Emma comes to the aid of Rean and new Class VII when they are trapped in a barrier and forced to fight the Cryptid Mordreian by Campanella. Her magic is much stronger now. She is in Crossbell because she is following a trail of Vita, whom she is looking for following the end of the Civil War. Emma is present at the Orchis Tower when McBurn and Campanella announce their arrival, and makes good use of her magic to shield everyone from the flames. She then accompanies Rean in an investigation into the Society's presence in Crossbell, tracking them down to the Stargazer's Tower where they fight. She briefly sees Vita but does not get long to speak with her.

Emma is present at Class VII's reunion in Heimdallr and takes part in the operation to find Calvardian agents and slay the reawakened Zoro-Agruga. It is in the catacombs that she has the opportunity to introduce her 'grandmother' Roselia to the party. Emma respects her grandmother but at the same time, thinks little of some of her childish behaviours and frequent withholding of key information.

After the Emperor's injury, Emma is with Class VII when Thomas and Roselia give an explanation in the Cathedral. She notices Vita's presence and calls her out. The three witches work together so that events unfolding at the newly summoned Gral of Erebos can be witnessed. Emma then takes part in infiltrating the Gral, with Roselia lending Emma her staff, which changes to a purple hue when in her hands. She is left behind on the first tier, where she uses her magic to reduce the power of McBurn's flames.

Emma uses her magic to evacuate all of Class VII, save Rean, from the collapsing Gral, to Eryn Village--the hidden home of the Hexen Clan in Isthmia Great Forest. Old Class VII recovers after some words of admonishment and motivation from their successors, and set about placing stakes around the Empire to try and locate Rean. Emma helps out frequently and provides key assistance in allowing the party to travel to the Black Workshop where Rean is held in a rescue operation. Emma once again finds herself using her magic to hold back McBurn's flames and tangle opponents up with vines of magic.

Emma is present at the Glorious's attack on the Pantagruel. After the battle, Emma travels to Luna Shrine at the behest of Roselia to uncover the history of the Empire and truth behind the Rivalries, confronting Vita, Aurelia, and Roselia in her true form along the way. Emma does her best to support Rean through the oncoming Rivalries from thereon, even at one point in a bonding event trying to remove the curse portion from his body unsuccessfully with forbidden techniques.

In the overture in Mishelam, Emma helps the other witches place a barrier over the area to protect them. She spends most of her time there chaperoning her irresponsible grandmother. In the final battle, Emma takes part in the main assault against the Tuatha De Danann, helping to teleport everyone inside from the Courageous II. She helps to teleport everyone in for the final battle against Ishmelga-Loge. Emma is present at the Imperial Wedding.

During one of Vita's visits to Eryn, Emma's deceased mother's (Isola Millstein) journal manifests and the three witches and Celine travel to a location found by visiting Zeit to uncover a memoir left by her. They overcome the trail and finally receive a spiritual message revealing the truth of her death and how proud she is of everyone and the woman her daughter has become.

Emma accompanies Rean's group to the Nord Highlands in search of Olivert Reise Arnor. She mainly provides magical assistance, for example teleporting the party to the Courageous II once they find it. She states that some of technology they have been encountering is beyond even magic. Gaius and Emma work together to transfer spiritual energy in the following plan to stop the automated tanks. Afterwards, she uses the power of the Aria Shrine to help mass transport everyone to the location of the Sonorous Seashell in Mishelam Wonderland.

Emma takes part in the final battle against Elysium and Reverse Babel. She helps to teleport everyone inside the facility. In the final battle, her magic helps create a platform for the party to stand on. 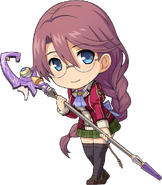 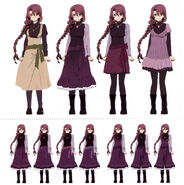 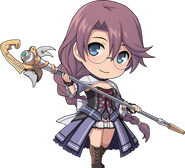 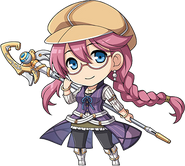 A screenshot of Emma sighing alongside Machias Regnitz, Alisa Reinford and Olivert Reise Arnor in Trails of Cold Steel III.

A screenshot of Emma with Olivert Reise Arnor in Trails of Cold Steel III.

Memories - Young Emma with Vita and Grianos and Roselia watching them 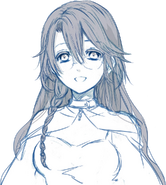 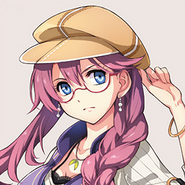 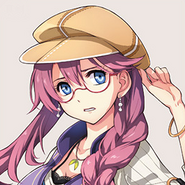 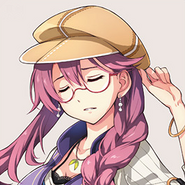 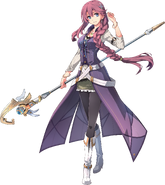 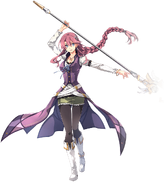 Promotional Screenshot of Emma with Celine

Promotional Screenshot of Emma with Roselia and Celine 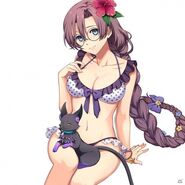