Kiseki Wiki
Register
Don't have an account?
Sign In
Advertisement
in: Characters, Trails into Reverie Characters, Novel Characters,
and 3 more

Monarch's Regalia
v · e
The Emperor (エンペラー) is a mysterious man operating as a high-ranking member and Warden of the organization Garden.

The Emperor is an enigmatic figure with a face that is mostly shrouded. He appears to be a tall man wearing a black shirt and trousers and several pieces of golden armor — the Monarch's Regalia. This set is comprised of a twisted sceptre, purple orb with a golden eagle, helmet emblazoned with a crown, and arm guards, chest plates, waist guards and boots. He also wears a belt with a crown and a tattered black cloak with a high upturned collar.

Emperor exploits low-ranking members of the Organization as tools, seeing them not as individuals and ruthlessly murders anyone daring to escape. He was dangerously analytical, knowing the inside and outs of each of the assassins, including their tactics, strategies and equipment. The Emperor was also sadistic, enjoying the thought of slaughter and the members killing each other. With his abilities also came arrogance, with him never imagining anything other than domination. When this was challenged, arrogance gave way to outrage and he lost his composure.

The Emperor is one of the Wardens of Garden, and by reputation one of his most savage members. He seemed to be heavily involved in the deployment of assassins and reporting, and would also hunt down traitors and deserters without mercy. This included Swin Abel and Ace, who were unable to overcome his gravitational manipulation. He wears a set of four golden artifacts called the Monarch's Regalia that allow him to manipulate gravity. At some point following his hunt of Ace and Swin, he lost the Orb, reducing his number of artefacts to three.

Although speculating, Nadia Rayne suggests one possible backstory for the Emperor is as the son of tyrannical king. When the prince came to succeed his father and set out to be more benevolent, the populace were still so full at anger that they overthrew the monarchy and the small country became a republic. The prince fled these events and somewhere along the way became the Emperor.

As a simulacrum, the Emperor still retained his sadistic streak but an unexpected anomaly in his creation resulted in him being left impressed with Swin and Nadia's skills and sought to have them rejoin the Organization. Upon learning that he was a fake, he expressed a desire to replace his then-deceased original.

Swin reports to the Emperor after the mission to assassinate Haldor Baarn is completed successfully. The emperor grills him on all the mission details, including what his partner, Nadia did. The emperor questions Swin on whether he is planning to betray the Organization again, and although he is, Swin denies it. Swin recalls it was the Emperor who hunted him down in the first place following his first escape attempt.

Swin is recalled to the Emperor less than twenty four hours later as Nadia has told him all about Swin's upcoming plan of betrayal. Nadia had found out the Emperor already knew and decided to act first, playing on the Emperor's desire to see bloodshed in order to try and get the advantage. Nadia plays a show of taunting Swin, before preparing to kill him with prepared steel wires, but at the last second, pulls them and triggers a boulder fall which apparently crushes the Emperor. The power of the Regalia protects him however and he soon frees himself, waiting for the pair to return.

Nadia and Swin soon return to fight as they will never get a better chance, but are initially unable to get the advantage over the Emperor whose precise control of gravity and intricate knowledge of the two's combat styles leave him with no openings. Nadia feigns a mortal injury and Swin becomes more aggressive in trying to land three blows in the same spot. Nadia soon reveals she has analysed the him and states he is one artifact down- before using her wires to adjust Swin's combat style and allow him to land blows which detonate. They then finally slay the Emperor who states they will never escape.

A simulacrum of him appeared to assist Supreme Leader Rufus Albarea when the latter stages a coup in Crossbell. Like his namesake, the simulacrum bore most of the Emperor's personality, appearance and equipment. However, rather than eliminating Swin and Nadia for betrayal, he sought to bring them back to the Organization for besting him.

This new figure is active in around Crossbell and Erebonia. The Emperor used cloaking technology to keep his presence concealed. He broke into the Railway Military Police headquarters to take something, and after being spotted by Isara Irving, abducted her and took her to the catacombs where she was rescued by Claire, Sharon and Sara. The Emperor had knowledge of Sharon being a part of the Order of the Moonlight Horse. The Emperor is also spotted using his gravity to bring down Wilhelm Ballad's aircraft in the hopes Tita would sacrifice the orbal gear IV to save him, which she does and the emperor takes the artefact used as an anti-gravity device.[1] Lloyd Bannings also spots his cloaked figure for a second in the Geofront.

Swin and Nadia confront the new emperor in the Doll Studio, where he expresses the notion that the pair are the best assassin tools he has seen and wants to bring them back under his heel. The simulacrum only learned that he was a fake when Nadia was able to discern glaring flaws that confirmed her suspicions about him. Regardless, he chose to take the place of his original upon learning of this, destroying the terminal that F. Novartis was using to broadcast his voice and hologram. He was ultimately defeated by Nadia and Swin, alongside the rest of their group.

Following his defeat, the regalia resonated with him, with the orb cracking and transforming him into a monster. This new form was consumed by the desire to retrieve Nadia and Swin and tracked them down to the Knox prison where he ambushed the group once more after smashing through a wall. With help from their allies, and the newly arriving Zeit, the Emperor was defeated for good this time by the pair. The arm containing the orb was severed and Nadia and Swin jointly pierced it with Swin's blade, shattering it into pieces. 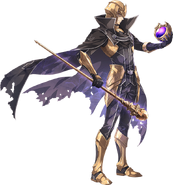 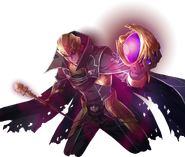