Mirage
v · e
Ennea (エンネア), also known as Ennea the Sharp (のエンネア), is a commanding knight of the Stahlritter.

Ennea is a young woman with gray-lavender eyes and long wavy indigo hair which is worn loosely to her waist. She wears the standard armor of the Stahlritter, resembling a medieval knight's with several metal plates and round guards at the joints. Form-fitting black under clothing is worn beneath the armor, and a fuchsia skirt, split down the sides, is draped around the waist, sporting the Ouroboros emblem. Ennea also wears an armoured headband with four protruding feathers and a large central piece above the forehead.

Ennea carries what is described as a 'magic bow' with a large hand guard and several protrusions along the arms of the bow.

Like the other members of the Stahlritter, Ennea carries a deep and unflinching loyalty towards her master. Despite being the head knight, Ennea loves to tease the younger Duvalie.

Ennea was a victim of the D∴G Cult before being rescued by Arianhrod and Duvalie. The magic bow she was given to her as a test subject, and she mainly served as an assassin for them. She states that she would have died for the cult, had Arianhrod not extended her hand and invited her to see the world with her own eyes. She joined the Stahlritter in gratitude.[2]

Together with Ines, Ennea serves as the assistant leader of the Stahlritter. She occasionally makes fun of Duvalie.

Ennea assisted Duvalie during the initial stages of the Phantasmal Blaze Plan in Crossbell in S.1204. The unit makes its first appearance in the marshlands of Crossbell, not far from Mishelam. They effortlessly take down Lynn and Aeolia who were operating in the area, necessitating a search and rescue operation.

As the second of the Stahlritter to confront the SSS at the Stargazer's Tower, Ennea complements them on defeating Ines and states she will go all out. She introduces herself but is defeated. After losing to them, she states that she will be scolded by Duvalie later on and surrenders, leaving.

Ennea, together with the rest of her unit, moved to Erebonia in S.1206. She makes her debut appearance coming to the aid of Duvalie in Hamel, but does not engage in combat directly after shooting an arrow, teleporting out with the others after an introduction.

Ennea is present at the meeting of Ouroboros members on Bryonia Island. Later, they use the Sol Shrine as a base, defeating and capturing Millium Orion who discovers it. When Rean Schwarzer and his new Class VII arrive in search of her, Ennea and the Stahlritter engage them with the Radiant Star Formation. They are defeated but withdraw when Arianrhod herself appears.

The Stahlritter are next seen attacking the Juno Naval Fortress. Ines and Ennea confront New Class VII in one of the paths, but teleport out after being scolded by Duvalie and are not seen again until the rooftop where they fight in conjunction with Arianrhod. They lose and withdraw once again, and are later seen running through the Langudoc Canyons relating their stories of how they met their Lord.

Ennea takes part in the preparations of the Great Twilight, and acts as a guard for the Gral of Erebos along with the rest of the Stalhritter and their archaisms.

Ennea is present at the Black Workshop, where they are patrolling and eventually called upon to apprehend Rean, who is trying to escape in a frenzied rage. Duvalie , having decided against the path of her lord temporarily has joined him and they engage sin a battle, supported by McBurn. Although Rean is successfully rescued, Ennea stands by her Lord even as Duvalie herself leaves with Crow.

Ines and Ennea later appear as part of the forces attacking the multi-nation summit onboard the Pantagruel by the Glorious. Ennea is present on the female side of the deck, with Sharon supporting them to use the Radiant Star formation.

Further on, Ennea relates her backstory and motivation to the party as they reach her in the Stella Shrine in preparation for a rivalry with Arianrhod. Their fight helps charge the stage with conflict ready for the Rivalries to begin. She once again loses, but resuscitates in time to witness the death of her lord at the end of the rivalry. She does not initially fight on the same platform, instead standing at a distance until the archaisms are dealt with.

Here on, Ennea joins the side of Rean and his companions, including Duvalie. They volunteer their efforts to take on one of the five fake salt pales protecting the Tuatha De Danann alongside Zephyr. They are also teleported in to help in the final battle against Ishmelga-Loge.

Ennea makes a brief appearance as part of the forces summoned by Vita Clotilde to aid in the conflict against Elysium and Reverse Babel.

A version of Ennea appears as a Lieutenant of the Demon Prince Rean in Magical Girl Alisa, acting as a boss for the second stage alongside Ines. This version wears gold and black armor instead of the usual silver. 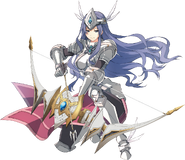 in "Banquet of Snakes"