Erika is a woman with long blonde hair, worn loosely tied with a red ribbon, and turquoise eyes- traits she shares with her daughter Tita Russell. She wears a buttoned up navy collar shirt and long black skirt with tights and fuchsia heeled shoes. Over this, she wears a smart tailored labcoat.

Erika dotes on her daughter Tita to the point of over-protectiveness. She detests Agate Crosner, whom she regards as an uncouth never-do-well unfit to be in Tita's presence, and frequently seeks to inflict suffering upon him. She appears to have an obsessive and hyperactive personality that can manifest itself in several ways, when she wanted to become a sister while young (mostly because she liked the clothes). Although seemingly an overwhelming crazy person at times, she can turn on a dime and become very serious and thoughtful as well. Erika's relationship with her father Albert Russell appears tense at times and often prefer to be referred to as "Professor Erika" instead of "Professor Russell" though they work quite well together and it's hard to tell how much of the animosity is serious or their own unique way of humor and family bond.

Erika has a 'Success Dance' she performs before every experiment, consisting of wild leaps and blasts of energy. her family state that whether she does the dance or not has no real outcome on the actual success of the experiment.

Erika Russell was born as the daughter of the then-Zeiss Engineering Factory Chief Albert Russell. She ended up marrying Dan Russell and gave birth to their daughter, Tita.

Like her father, Erika has had a profound interest in orbal technology since she was a child. Whereas her father is more theoretically oriented, she herself is mostly focused on the pragmatic side of orbal science. She submitted an outline for the Capel Project, but had to back down from its development after losing a bet with her father, who finished its development in S.1197.[1] At some point as a child, Erika had a competition against G. Schmidt for inventions and cried when she lost, apparently because Schmidt refused to hold back against a child. Erika is also responsible for the fundamental system of the Arseille.

With her husband, Erika returned to Liberl after the Orbal Shutdown Phenomenon in S.1203. She immediately set her plans for the Orbal Gear Project, inspired by the Pater-Mater, into motion. With help from her family, she finished the first prototype in two weeks.[2] She was at first reluctant to involve Tita in the development process, but after overhearing her heartfelt plea and motivation for wanting to do so, Erika was persuaded.

She uses the development of the Orbal gear to punish Agate, whom she believes 'corrupted' Tita. She rushes off to the Bracer Guild to request his participation in the tests directly, and from there on does everything in her power to make him suffer and look bad. She dismisses his efforts, and urges Tita to uses jet boosts in the race in order to beat him. When the prototype loses control and Agate saves Tita, she gazes on with a steely look. She requests further tests with Agate in order to further punish him, and sets up extensive traps to harm him when he visits the Russell home.

Hello there, beautiful. May I have a moment of your time?
Please be aware spoilers for Hajimari no Kiseki may be present in the following section. Hit [Show] on the right if the show must go on. Adios, amigos!

Erika travels to Erebonia where she eagerly dotes on Tita and 'refills her Tita energy'. She quickly becomes antagonistic with G. Schmidt, with the two trading jibes and insults. Her business is part of a collaborative effort to locate any remaining remnants of the Black Workshop and dispose of them, but also to bring back Tita to Liberl, stating the Empire is too dangerous.After some back and forth arguing, Erika states she will let Tita stay if she can produce something worthwhile in four months, and pass Erika's 'final challenge'.

Erika finishes the Black Workshop cleanup operation and the conversation turns to the Thirteen Factories. Erika is displeased that Renne thinks she would get along well with F. Novartis. Erika is concerned about always lagging behind the Thirteen Factories and proposes the West Zemuria Technology Federation, a joint enterprise between the leading orbal developers, ZCF, Epstein, Reinford and the three disciples of C. Epstein. Schmidt initially refuses but Erika goads him into it. Erika then commences the Final test for Tita using Einhel Keep, which she has modified to level XX. She also enlists several other individuals to act as obstacles, including Agate. Erika herself participates in the final battle, using a remote controlled archaism. She performs her 'Success Dance V.3' and attempts to warm up the machine by striking Agate. After defeat, she permits Tita to stay, citing that she was impressed with the Orbal Gear Mk 4.

Erika travels to Crossbell with Agate acting as a research assistant. When Supreme Leader Rufus Albarea takes control of the city, Erika is seized by the Black Guard and she makes Agate swear to protect Tita. She is eventually tracked down to the Reinford Arsenal Factory where she has been forced to cooperate with F. Novartis on his research. She found it a great experience but threatens Agate for not keeping his promise by brining Tita to the factory. In the final battle Erika tries to do something about the communication black-out, heading first to St. Ursula Medical College and then to the terminal in the Castle of Mirrors. She does not want to let Tita fight, but is convinced after Tita brings up her similarities to her mother and how she fought for justice in her own way. 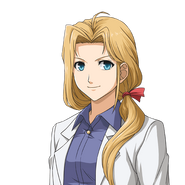 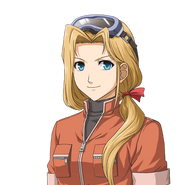 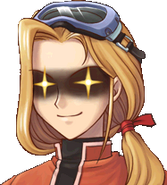 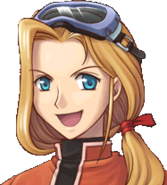 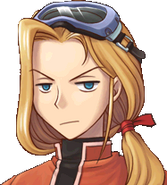 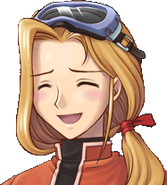 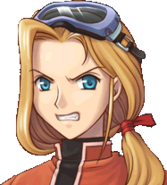 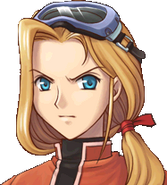 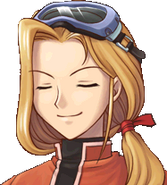 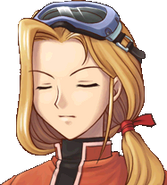 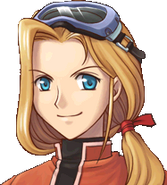 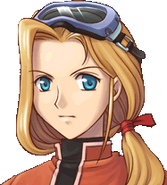 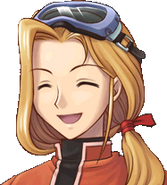 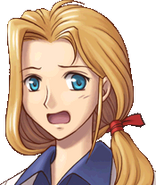 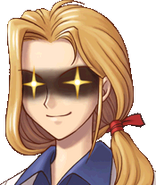 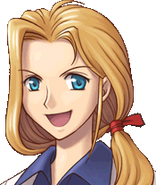 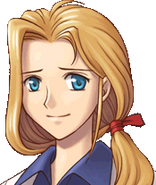 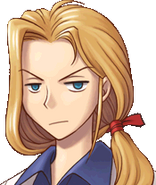 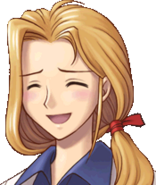 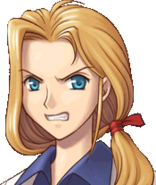 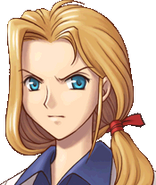 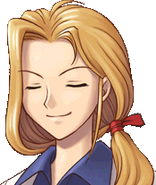 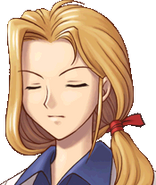 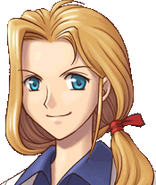 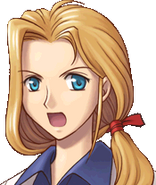 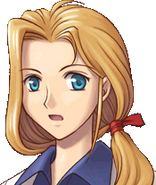 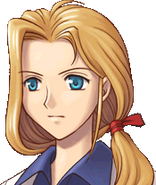 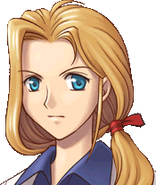 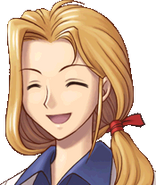 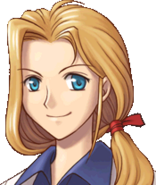 Promotional Screenshot of Erika with Tita Russell and G. Schmidt.

Promotional Screenshot of Erika with Tita Russell, Agate Crosner and Tio Plato.
Add a photo to this gallery

Retrieved from "https://kiseki.fandom.com/wiki/Erika_Russell?oldid=64963"
Community content is available under CC-BY-SA unless otherwise noted.