172 cm
v · e
F. Novartis (F・ノバルティス) is the sixth Anguis of Ouroboros and leader of the Thirteen Factories network.

Novartis is an elderly man with crop cut blonde hair, blue eyes and golden round spectacles. Novartis wears a medium length lab-coat, while underneath he wears a dark blue ornate waistcoat and white dress shirt. To complete his outfit he wears white gloves, tan coloured dress pants and sand coloured boots. The Ouroboros insignia is displayed on his left shoulder.

Novartis' personality is akin to that of a mad scientist, prioritizing the results of his creations over safety, including human test subjects when applicable. Nonetheless, he is extremely intelligent and is mostly responsible for a number of breakthrough technologies.

He reluctantly accepts the free-will stipulation of the Enforcers but is often seen going about his own interests even in the middle of the society's operations and plans. He is not on particularly good terms with McBurn.

Doctor Novartis is in charge of the unification of the Thirteen Factories, which are each specialised in a particular expertise. He is also responsible for the development of humanoid weapons and network systems. Other technologies that Novartis was involved in was voice identification technology, which was implemented on the Glorious.

In S. 1196, Novartis was the one who dispatched Sharon Kreuger on a mission to infiltrate the Reinford Group and make contact with Franz Reinford. The mission ended in failure with Reinford deceased, and ultimately resulted in Kreuger joining the group and entering a hiatus from the society.

One of the developers of humanoid weapons is Joerg Rosenberg of the Doll Studio in Crossbell. Novartis considers him peerless when it comes to fine-tuning and making the final adjustments to dolls, whether they are consumer collectables or humanoid weapons. He had Joerg do the final check on the Aion.

Despite Novartis' trust in Joerg for his excellent work, Joerg dislikes Novartis' work ethics, who had seized the Pater-Mater to have it sync with Renne. Despite the dangers, he still continued regardless, which Joerg thought as inhumane.

Following the conclusion of the Gospel Plan, Novartis was the only Anguis who thought little of Leonhardt's death, being more concerned with Renne and Pater-Mater. The other Anguis then reminded him about Weissmann's obsession with Joshua resulted in his downfall, causing him to quickly drop the subject, although he insisted he would continue to monitor the two.

For the Phantasmal Blaze Plan, Doctor Novartis collaborated with Arianrhod, Campanella and the Crois family to bring their plans in Crossbell to fruition. He provided them with humanoid weapons - Aion Type-α, Type-β and Type-γ - and, as agreed on with Mariabell Crois, he recovered the Type-α after completing his duties.

When he caught a glimpse of the awakened KeA, Doctor Novartis expressed a profound interest in the newborn potential that exceeded the original Sept-Terrion of Mirage's powers and started to collect data on her.

When the Azure Tree appeared he became deeply interested in researching the phenomenon, but much to his disappointment, he had to leave since the focus of the Phantasmal Blaze Plan would shift to Erebonia next.

Along with the other Anguis except Vita, he votes in favour of abandoning the Phantasmal Blaze Plan in favour of the Great Twilight plan.

Novartis sends Gilbert Stein and the enhanced Jaegers to test the Field Nulling Devices on the the Hidden Village Eryn whilst Roselia Millstein was away and Class VII were supposed to be travelling to Crossbell to fight the third Rivalry against Arianrhod, though Gilbert decides to capture the village whilst doing so. To their surprise Class VII had first attempted to travel to Eryn only to find themselves unable to due to the Field Nulling Devices provided by Novartis restricting the use of orbal energy. Class VII concoct a plan and manage to break Rean Schwarzer, Tita Russell, Randy Orlando, Tio Plato, Agate Crosner, and Olivert Reise Arnor into Eryn, who proceed to defeat Gilbert and the Jaegers, saving the village.

Novartis continued to operate the Thirteen Factories, learning of the singularity Elysium, which had created various Simulacrums of notable Zemurians, such as Rufus Albarea, Arios MacLaine and the Emperor. Using what he learned from Elysium, McBurn was able to create a simulacrum of McBurn with the forced assistance of Erika Russell and Professor Seiland to recreate the Divergent Laws.

Alongside the McBurn simulacrum, Novartis assisted the Rufus simulacrum in taking over Crossbell City by providing it with new Zauber Soldats and archaisms; he had only done so because he saw it as beneficial to his research. He oversaw the Reinford Military Arsenal and took control of Joerg's Doll Studio, using the former to create equipment and renovating the latter's underground system completely.

When Lloyd Bannings's group infiltrate the facility and confront him, he unleashes his McBurn simulacrum on them, only for it to be defeated. After the simulacrum realizes it was fake, it tries to kill Novartis but fails and hits the data panel, although the attempt leaves him slightly shocked. He then teleports out, having memorized most of the code. He simultaneously communicates with Renne and C's group in the Doll factory, where he had set up dolls of Renne's parents, multiple Lapises and the Emperor to entertain the party.

Novartis later witnesses Reverse Babel reveal itself in Lake Elm and basks in its magnificence. Vita confronts him about his role in all of this but he states he is still loyal to Ouroboros's aims. He teleports out having satisfied his curiosity.

Shocked at the final outcome, Novartis interrupts (the real) McBurn and the Grandmaster in the Celestial Globe. He is cautious of McBurn who he had copied, and wants to know if he had anything to do with it, pointing out something in Ored. Another transmission interrupts them all, with Novartis recognising the logo and Roy Gramheart. 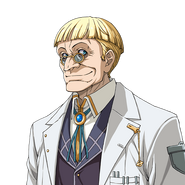 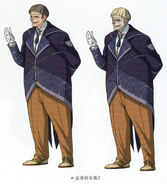