v · e
F.I.O. (FIO) is an orbal done developed by the Verne Company accompanying Quatre Salision. He was introduced in Kuro no Kiseki.

FIO is an autonomous orbal done, a technology still relatively early in its infancy. FIO is the floating support version, as opposed to terrestrial attack versions like XEROS. It works on an AI that is based on a hollow core, and FIO is capable of rudimentary language and decision making processes.

FIO can deploy forcefields, lasers and support crafts, and is capable of lifting moderate weight. Quatre can use FIO as a lance weapon when riding XEROS. FIO has a high-powered sensor capable of detecting enemies and reading various pieces of information. It has the ability to detect material composition, and deduce when an item is likely to be an Artifact based upon this information. It can also identify Phase Space.

FIO accompanies Quatre wherever he goes. Risette Twinings is surprised to see functional orbal drones working in the field as it is still technology being developed. FIO can operate independently from Quatre, and when the two are separated, FIO works with Feri Al-Fayed until its original owner is located. Quatre uses FIO to help buy groceries and other household tasks. 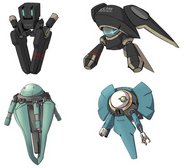