Fie is a young woman with stark white hair and lime green eyes. During her days at Thors, Fie wore the red blazer uniform of Class VII complete with a short tan skirt, lavender bow, black socks and green sneakers.

During the October War, Fie reverts to wearing a Zephyr style black coat, worn unbuttoned over a green crop top and gray shorts. She now wears a black scarf with a green cross emblazoned upon it, goggles, striped socks and high heeled lace-up boots in green.

As a bracer, Fie grows her hair out to mid back and now wears a white and white crop top with a sleeveless beige cropped jacket above. She also wears a a beige miniskirt, a dark turquoise scarf, black elbow length gloves and black thigh high boots.

In Kuro no Kiseki, Fie returns with a new outfit consisting of a sleeveless khaki shirt, blue underbust corset, white pleated skirt, black shoulder length arm coverings and thigh high black boots. She wears a series of brown belts to fasten her outfit togther and now sports a blue beret with a golden wing motif. The blue in her outfit and attacks is stated to reference to her friendship with Laura S. Arseid.

Fie is armed with twin gunswords, short pistol-like weapons that double as both blades and firearms. they are capable of rapid firing and being thrown like chakrams.

Fie is a quiet girl who doesn't take a strong interest in many things. She doesn't focus much on studying, and tends to slack off by sleeping anywhere around the school. Nevertheless as she was raised as a Jaeger, Fie is more focused and serious on the battlefield. As she matures, she becomes much more playful and interactive, often teasing the others.

A girl with no family or friends, she wandered until she came upon Zephyr, a Jaeger Corps group who claimed to be undefeatable and on par with its rival group, the Red Constellation. Fie was found and raised by Rutger Claussell, the leader of Zephyr known as the Jaeger King.

As a jaeger, she was given the codename "Sylphid", specializing in gunswords and was well-regarded for her physical abilities, making her an agile fighter. She was also on good terms with fellow members Leonidas and Xeno. Rutger was especially fond of his adoptive daughter, as he felt like an actual human and not a "mindless creature" with her around. Fie was grateful to Rutger for taking her in.

Rutger eventually fought Baldur Orlando, the leader of the rival jaeger corps Red Constellation for three straight days, both of them eventually dying in the process. Zephyr eventually disbanded with the death of their leader. It was later revealed that Rutger had informed Leonidas and Xeno to find a way to bring him back from the grave, something which Fie was not aware of. After some time wandering she is found by Sara Valestein, who recovers her, and soon she is enrolled in Thors Military Academy where Sara teaches.

While she initially comes into conflict with Laura, as someone who lived a completely different lifestyle from her, the two eventually become close friends, and she does a lot of growing up by participating in school life. Most notably, her presence in the gardening club where she became good friends with Edel and learned how to look after grown things.

During the October War, Fie is one of the first classmates Rean Schwarzer meets up with in the area around Celdic, where she, Machias Regnitz and Elliot Craig are conducting covert operations. When travelling to Garrelia Fortress, Fie alerts the group to the presence of mines and they barely escape before two jaegars working for the Noble Alliance appear- Leonidas and Xeno. Fie recognises them from Zephyr and asks why everyone disappeared leaving her, but the pair remain cryptic and withdraw.

As the war comes to a conclusion, Fie challenges Xeno and Leonidas once again and they reveal they have been working to 'Bring back the boss' despite his apparent death.

After the Erebonian Civil War and graduating from Thors Military Academy in S.1205, Fie started working as a bracer. With the guidance of Sara Valestein and Toval Randonneur, she reaches the rank of full bracer at the young age of 16. Ever since she's been working alongside Sara.

Fie had been monitoring Rean and his new class upon their arrival in Saint-Arkh, and comes to their aid when Ouroboros members Shirley Orlando, Duvalie and a host of archaisms attack the Derfflinger. Fie engages Shirley on the roof of the train, without a clear conclusion before Ouroboros withdraw. Fie then joins Rean in a special operation to discover what Ouroboros are doing in the region, confronting them in Hamel. She is shocked to see Leo, Xeno and a resurrected Rutger appear before them before leaving in Zector.

Fie is later present for the reunion in Hiemdallr and the subsequent operation to locate Calvardian agents and slay the reawakening Zoro-Agruga. She attends the party in the Esmelas Garden when the Emperor is shot. Fie participates in the battle in Heimdallr when the Gral of Erebos is summoned and enters the Gral with the main party. She stays behind on one of the tiers to keep Shirley and Rutger busy with the help of Sara Valestein.

While new Class VII recuperate, Fie joins her classmates in efforts to locate Rean, placing spiritual stakes at key sites around the Empire. Fie joins Class VII intermittently during the following efforts and is part of the raid on the Black Workshop. She would also be a part of the battle on the Pantagruel and subsequent efforts around the Empire.

Fie plays a key role in the rivalry that takes place in the Draco Shrine, where she helps take on Xeno, Leonidas and eventually Rutger. She finally has the chance to say goodbye as he fades from existence as he states how proud he is. She and other jaegar figures toast a drink to him some time later after the occasion.

Fie is present at the Mishelam break before the Great War. During the operations the next day, she accompanies Rean to the Tuatha De Danann and the ensuing climatic battle. Fie pursues an escaping Mariabell Crois and Campanella by hitching a ride on Cliomh-Solias and prevents them form getting away before they provide information.

Fie is part of the group that accompanies Rean to Mishelam Wonderland in pursuit of the missing Sonorous Seashell. She helps take out several mechanical gargoyles before entering the Castle of Mirrors with the others. There she confronts a Simulacrum of herself and witnesses the arrival of Zoa-Gilstein.

Fie is part of the final battle against Elysium and Reverse Babel in Crossbell. Before meeting up with the others, she fought a huge monster with Laura and ran into Lynn and Aeolia. Fie exclaims that would like to chat with Garcia Rossi after the battle is over.

Fie travels to Calvard to assist the branches there when they become overworked. The activity of mafia group Almata has resulted in the Bracer Guild's forces being spread thinly requiring additional assistance. Fie arrives shortly before the Tharbad Film festival is due to begin. She first meets Van when operating in Dirke Memorial Park and the two exchnage introductions. Fie is also at the information exchange in the Dark-Light district.

In Tharbad, Fie accompanie sthe party to rescue Sarah from Gaspar Dillon in VegasFilm's secret level. Fie gets the party out of legal trouble with the police when Gaspar is found murdered. Fie recognises the similarities with the people controlled by orbal shishas and dancing with the incident in Crossbell a year and a half ago and helps bring the situation under control.

Fie makes fast friends with Feri Al-Fayed due to thier shared experiences as young jaegers and mutual sister type figure in former Zephyr member Aida. The two honor her memory and bond over their memories of her, even taking her favoured rifle for maintenance as a tribute to her. Fie takes the rifle to Leo and Xeno to look after.

Fie is among the forces Zin Vathek brings with him to Oración on behalf of the Bracer Guild. She is one of the potential alies that will assist Van through the death game should he elect to side with the Bracer Guild but will otherwise act as an oponent on the first day should Van side with another party.

Fie is present in Edith after Almata is beaten and celebrates in the Monmarte Bistro with the others. On Revolution Day, Fie is caught up in Pandemonium enveloping the city and teams up with Feri to take down a Diabolos Cube. She then takes over from Shizuna Rem Misurugi and joins the party to assist Van. She will depart once van finds more allies to join him, returning to help take down the Diabolos pillars and allow his team access to Genesis Tower in the climax.

In the approach to the New Year, Fie returns to Erebonia by train, saying farewell to the other bracers. 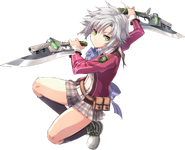 Memories - Fie being found by Rutger 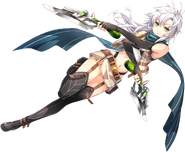 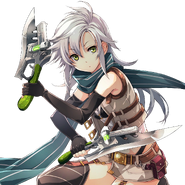 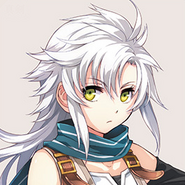 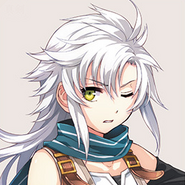 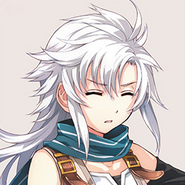 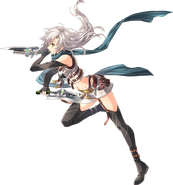 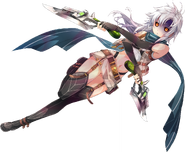 Promotional Screenshot of Fie with Duvalie 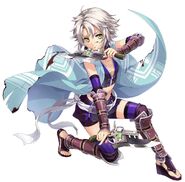 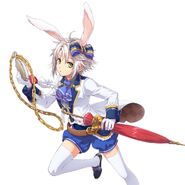 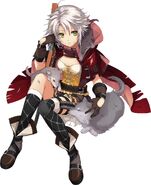