Fritz is a tall young man with blue-grey curly hair, bushy eyebrows and matching eyes. He wears the revised uniform of Thors Military Academy, consisting of a red and black blazer with gold trimming, a violet waistcoat with gold trimming, black trousers, white shirt and black tie. Fritz also wears a silver clip on his tie and brown laced shoes. Fritz uses a sabre in combat.

Fritz is a student excelling at both military and literary arts who enrolled at Thors Military Academy alongside Crown Prince Cedric Reise Arnor. He is a courteous and calm person, and intelligent - reaching fifth place in the combined periodic examination of the main and branch campus.[1] He acknowledges Kurt Vander as his rival and somehow gets along with Ash Carbide.

Fritz is introduced as a high-achieving student that is part of Cedric's entourage. He is one of the two students Cedric primarily moves around with, and joins him by piloting a crimson Spiegel when the prince decides to challenge the Branch Campus. Fritz is seen once more in the capital as part of the joint field exercises and the operation to find Calvardian agents. He initially looked on New Class VII with hostility, but once he became more familiar with the group she considered them her rivals. They train together after a meeting in the Vander Training School. Fritz is also an avid chess player.

Despite this, Fritz is amongst the forces deployed to defend the Gral of Erebos alongside the Main Campus. They prioritise engaging the Branch Campus students when they arrive to help.

When the main and branch campus form a joint battlefront during the Twilight's finale, the students were tasked with gathering materials for medicines. Fritz was teamed up with branch campus student Kairi. Their search for Zemuria Moss was interrupted when a Magic Knight approached them. With the unexpected help from Class VII, Fritz made sure Kairi got out of the range of fire. Fritz apologises for his missteps, but Kairi insists that they were able to defeat the opponent because Fritz was with here him and doesn't mind that Fritz judged as him incapable of his appearance. Fritz admired the strength of the branch campus students even more thanks to Kairi's heartfelt words.

At the Thors Branch Campus Academy festival, Fritz faces off against Kurt in a chess match, which he loses. Fritz hopes to rejoin the chess club at the main campus and looks forward to facing him again.

Fritz is amongst the Main Campus who arrive to help in the final battle against Reverse Babel. He deploys a Soldat from the Ark Royal and fights the automated Zauber Soldats. 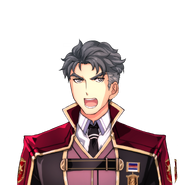