Schmidt is an elderly man in his senior years, with white combed-back hair, a beard, and light-blue eyes with a monocle place in the right eye. He wears a white lab-coat, suitable for his profession as a professor of technology. He also wears a tan light red vest shirt underneath with a black collar shirt under that, with a golden broach necklace that has a jade gem on the front, light brown pants, and brown shoes. He carries the pocket watch given to him by his first disciple, Franz Reinford.

Professor Schmidt has a very serious yet very hard to handle personality. He is very blunt with other people, not holding back in criticizing or mocking them for the obvious. On the other hand, he takes his research seriously and if he is very invested in a project, he might outright ignore whoever is speaking to him.

He only takes jobs that satisfy his intellectual research; once done, he does not care what happens to his work, even if it ends up hurting other people, using his job to justify it.

Schmidt takes immense pride in his talent, considering "rushed, half-finished" projects to be a disgrace. He doesn't appear to have a high view of Albert, considering him to be a "two-bit" tinkerer, but expresses jealously at how Albert was blessed with children who had talent.

Professor Schmidt has worked together with his partner, Reinford founder Gwyn Reinford, to advance the orbal technology in Erebonia if only to satisfy his own intellectual curiosity. He is president of the Roer Institute of Technology.

In S.1196, his first disciple, Franz Reinford, submitted his "graduation" projects of the Panzer Soldats and a highly advanced pocket watch. Schmidt was intrigued with both submissions, but was unable to give a verdict as an accident appeared to have taken Franz's life away before he could do so. Schmidt held onto Franz's pocket watch and took care of it, intending to use it until it broke.

In preparation for the Erebonian Civil War, Professor Schmidt reverse-engineered the Divine Knights at a dazzling speed on behalf of the Noble Alliance.

Along with the Panzer Soldats, Schmidt also worked on archaisms for Ouroboros. He ultimately teamed up with Thors Military Academy students to craft a Zemurian ore-made sword for Valimar.

After the civil war, his foremost apprentice George Nome embarked on a journey throughout Zemuria to visit other makers of Orbal Technologies, while Professor Schmidt returned to his work.

During the one and a half year's break between Trails of Cold Steel II and Trails of Cold Steel III, Professor Schmidt has been transferred to Thors Branch Campus as a "Special Adviser" for their Orbal Engineering department. He is also being monitored by the Imperial Government as a potentially dangerous individual due to his quirky personality and his role in civil war as the maker of the Noble Alliance's Panzer Soldat units. He takes on a fourth disciple, Tita Russell, and oversees experiments at Einhel Keep, adjusted accordingly for whoever he is testing.

He also gains an assistant in the form of his second disciple's niece, Mint. While she proved to be useful in helping maintain the workshop when he or Tita were not around, her clumsiness in everything else infuriated him.

Schmidt's quirky personality meant that he worked with the government in the aftermath of the Great Twilight, ultimately accompanying Class I of the main campus. Their increased combat capabilities meant that Schmidt created a new level in Einhel Keep, appropriately named "Level X" and let Tio adjust the difficulty to her liking.

Upon seeing Class VII prevail over Class I, Schmidt walked over to Tita, giving her passing marks as he noticed that she had fixed most of the problems with her Orbal Gear. He then left with the others on the Derfflinger. Seeing that his second and fourth disciples were doing fine, he decided to check on his first and third disciples.

He was able to make contact with them and boarded a Gargantua-class airship, which Class VII infiltrated in order to start the Second Rivalry. He accused George of being too soft, demanding that he show the resolve he had as a student. After George and Sharon were defeated, Alberich dropped a Leviathan unit, which he noted used the base of a Goliath unit. The two later saved him and Irina from the Leviathan after it went on a rampage. Although impressed by the fully automated unit, he gave Alberich a failing grade, but refrained from giving George the same.

Sometime after this, Schmidt had Makarov set up a combat information network in anticipation for the World War, meeting up with him at Mishelam Wonderland. Makarov was upset that Schmidt had simply forced it on him, before his niece Mint came in with a call from Mary's father. Schmidt noted that Makarov had other issues and told him to resolve those first. He later went through Franz's notebook one more time to see if he had missed any information, intending to discard it as he had no further use for it. Rean convinced him to keep the notebook until tomorrow, which he agreed to. He later saw his first disciple off after Ishmelga was killed, calling him a "foolish student" for leaving so early.

Schmidt acts as remote operations for the team investigating the branch of the Black Workshop to find something left by Franz. He passes on compliments to Alisa and muses on the continued development of combat shells. He receives Franz's recorded message and accepts his request with outward resistance on a surface level.

Schmidt lets Tita carry on with her Orbal Gear project, stating a lack of direct interest and a focus on the remnants of the Black Workshop's technology. After Tita crashes her unit, Schmidt calls her a fool for using what was not a new gravity engine, but an article recovered from the Workshop- an artifact that may be the Emperor's orb from the Monarch's Regalia. Schmidt is later goaded into joining Erika Russell's technology alliance under the threat of losing out to his fellow disciples and being called too old to help.

Dr Schmidt accompanies Aurelia Le Guin to the Nord Highlands after being concerned for events happening there. He analyses the tanks, stating they were acting as if piloted by human hand, rather than simply automated-something far beyond current technology levels. He surmises they may be remotely controlled. He states an interest in confirming the technology behind this. Schmidt is called to look at the transmitter device guarded by a simulacrum of Arios MacLaine. he bypasses the lock and is surprised at its operating range before shutting it down. Through radio, Schmidt is able to transmit instructions to the others on how to disable the transmitter devices.

Schmidt is later called in once again to investigate the strange terminal found in the Castle of Mirrors. He states that it is the same family of devices, and many leagues ahead of current orbal technology, drawing power from the septium veins and being capable of something far more elaborate than controlling tanks. He is also surprised that it made use of the artifact and seemingly had the ability to replicate it.

Schmidt analyses the appearance of the Reverse Babel in Crossbell and deduces how it managed to go through construction without detection. he mentions it is a 'singularity' being capable of reached by human hands. He warns those assaulting it not to get caught into Elysium's futures.

Similar to how he himself is one of Epstein's disciples, Schmidt himself has four disciples, all of whom are extremely competent orbal engineers: 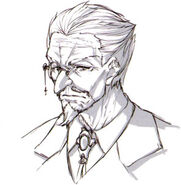 Promotional Screenshot with Rean and Towa